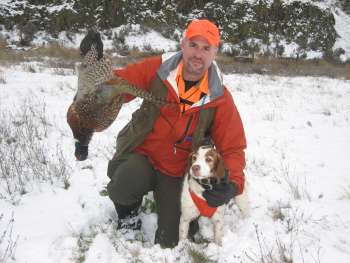 Condon, Oregon: On January 13, The Bureau of Land Management hosted a meeting to accept a second round of comments concerning a proposed lease of BLM lands to the Oregon Parks and Recreation Department (OPRD). The lease would effectively transfer management of 10,000 acres of intermingled and surrounding BLM land to OPRD to enhance the size of the new Cottonwood Canyon State Park and permit development on the BLM land to serve park visitors. About fifty people attended the meeting, and BLM and OPRD staff accepted comments in an informal arrangement that included tables showing maps of the park and neighboring BLM land. The crowd included local landowners, public officials, county land managers, emergency services personnel, and sportsman’s groups including Backcountry Hunters and Anglers (BHA) and Oregon Hunters Association (OHA).

Background: In 2008, the Western Rivers Conservancy purchased a private 8,000 acre ranch on the John Day River in north-central Oregon and conveyed the property to OPRD, which now manages the property as Cottonwood Canyon State Park. The new park and surrounding BLM land encompasses a large continuous expanse of rare native shrub-steppe habitat and includes 16 miles of the lower John Day River. This desert area is home to bighorn sheep, mule deer, elk, rare birds, lizards, and native grasses, forbs, and shrubs. The property also includes lower Hay Creek, one of the few steelhead spawning and rearing habitats on the entire lower John Day River. The area is popular with fisherman and upland bird and big game hunters, and an agreement was reached with OPRD to allow these traditional activities to continue into the future. In July 2011, the Oregon Parks and Recreation Commission approved the Comprehensive Plan for Cottonwood Canyon State Park lands which includes the proposed BLM lease.

Comments: Meeting attendees discussed the pros and cons of the lease, and Oregon BHA member Jon Pampush spoke with a number of people about OPRD’s plan to build an extensive hiker, mountain bike, and equestrian trail network throughout remote areas of the BLM land. A number of attendees had serious concerns about the trail network including: increased fire risk, difficult rescues of injured visitors, trespassing on private land, impacts on wildlife and habitat, and conflicts among hunters and non-hunters. Overall, the comments heard indicated that the scale of the park plan exceeded what would be appropriate for this remote and rugged area and wildlife habitat, and hunting opportunities, would be compromised if the plan was fully implemented.

BHA Position: BHA submitted written comments indicating non-support for the lease, largely based on the proposed trail development on the BLM lands. BHA believes the trail plan will result in wildlife disruption during critical breeding and rearing periods and will ultimately lead to wildlife displacement and decreased hunting opportunities. BHA generally opposes any transfers of federal land management responsibilities to state agencies or other entities, but we indicated in our comments that we are open to a management agreement that scales back the current proposal to better protect fish and wildlife habitat and hunting opportunities. The process is now in the BLM’s hands and the various elements of the plan will be assessed to ensure compliance with federal regulations. BHA will continue to track the development of Cottonwood Canyon State Park and advocate for appropriate, low-impact uses that don’t compromise fish and wildlife habitat and hunting and fishing opportunities.

About Caitlin Thompson
share on
See other posts related to oregon bha Oregon Issues
Get the latest news and stories, right to your inbox.
Search
Local Chapters