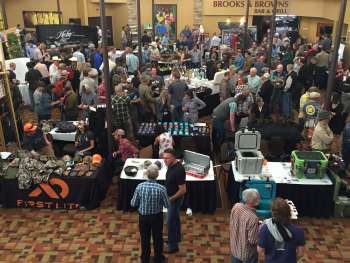 MISSOULA, Mont. - Backcountry Hunters & Anglers' 2016 North American Rendezvous was one for the record books, shattering records for attendance, funds raised for conservation and positive energy generated by backcountry enthusiasts - and signaling that 2016 will continue to be marked by unprecedented growth and accomplishment for the 12-year-old sportsmen's group.
More than 5,000 outdoor enthusiasts traveled from all parts of the United States and Canada to attend the annual gathering, which took place April 1-3 in Missoula, Montana. The event offered a diverse agenda of speakers, skills seminars and social events that won over the group's rapidly expanding membership base.

"The electricity, passion and excitement at this year's BHA Rendezvous bodes well for the future of backcountry conservation in North America - and confirms the growing political force that are public lands sportsmen," said BHA President and CEO Land Tawney.
"The energy is undeniable," continued Tawney. "BHA members get stuff done, and we have fun doing it. We're excited to carry this momentum forward into 2016, and we invite other sportsmen and public lands supporters to join with BHA's winning team."
Writer Steven Rinella, host of The Sportsman Channel's "MeatEater," gave the keynote address.
"It's inspiring to spend time around hunters and anglers who are willing to fight on behalf of our public lands and outdoor heritage," said Rinella. "That's why I continue to support Backcountry Hunters & Anglers. Their focus on public lands conservation is something that benefits all of today's outdoorsmen, as well as future generations. I will continue to stand side by side with this group."

Since its formation in 2004, BHA has emerged as sportsmen's leading, most outspoken voice in support of public lands hunting and angling, conservation of backcountry lands and waters and expanded sportsmen's access.
The iconic optics company Leupold & Stevens Inc., which became a BHA corporate partner last year, attended the 2016 Rendezvous and reaffirmed its support of the BHA mission.
"The North American hunting industry and outdoors families both depend on healthy habitat, clean water and accessible, abundant opportunities to get afield," said Leupold President and CEO Bruce Pettet. "Backcountry Hunters & Anglers is committed to upholding those values. We are proud to partner with BHA in their work, and we wish BHA nothing but the best as they strive to achieve their mission in support of our shared outdoor heritage."

YETI, another strong BHA supporter and corporate partner, reiterated its commitment to the BHA mission.
"YETI was born and bred in the toughest hunting conditions, so a partnership with Backcountry Hunters & Anglers was a no-brainer," said Ben O'Brien, YETI hunting marketing manager. "Our founders Roy and Ryan Seiders grew up casting for redfish in South Texas and chasing big whitetails across the state. For them, it was and is a way of life. That's why YETI is proud to support BHA and their efforts to protect and further the outdoor pursuits that set the groundwork for our products. We look forward to a strong alliance that will push forward the conservation efforts of those who value public lands and wildlife resources."
Brian Call of Gritty Bowmen called the 2016 Rendezvous "a blast."

"When I think of BHA," Call said, "I am reminded of the following quote by Shane Mahoney: 'Wildlife and wild places no longer exist by accident or without the intervention of those that truly and deeply care.' This is what Backcountry Hunters & Anglers is all about - deliberately protecting wildlife and wild places - because these places don't exist without conscious effort by people who truly and deeply care. The BHA Rendezvous was packed with people who care - people who set aside their brand loyalties and their financial concerns to fight for something bigger than all of us. I love this gritty organization!"
2016 Rendezvous sponsors include Sitka, First Lite, Kimber, onXmaps, Benchmade Knives, Camp Chef, Federal Premium Ammunition, Orion the Hunter's Institute, Orion Coolers and Adipose Boatworks, as well as YETI and Leupold.
The dates and location of BHA's 2017 North American Rendezvous will be announced shortly.
View photos from the 2016 Rendezvous.