Become a Life Member of BHA, Get a Kimber Firearm 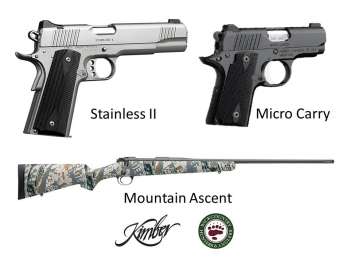 Missoula, MT – Backcountry Hunters & Anglers announced today that they will be offering several options for those who would like to become life members of the organization.  Those who sign up between now and the end of 2014 can choose a particular life membership plan that allows them to select one of three firearms from Kimber America.  The options are as follows:

In addition to receiving a firearm with your life membership plan of choice, Life Membership also includes:

“We are very pleased to be able to offer these fine American firearms to new Life Members and we hope those that join not only enjoy these rifles and pistols, but also enjoy the fact that they are gaining membership for life to an organization that cares so deeply about and works so hard to protect backcountry and the challenge and solitude that it provides”, said Backcountry Hunters & Anglers Executive Director, Land Tawney.

Founded around an eastern Oregon campfire in 2004, Backcountry Hunters and Anglers has grown by leaps and bounds over the past decade. With chapters in 14 states and one in British Columbia, the group seeks to ensure North America’s outdoor heritage of hunting and fishing in a natural setting through education, and acts as the Sportsmen’s voice for wild public lands, water and wildlife. BHA prides itself on its “boots on the ground” mentality and the ability of its membership to get things done.