The Colorado State University (CSU) Backcountry Hunters & Anglers Club recently appointed a new club president, William Lueth. William was raised in rural northern Colorado and started hunting at an early age, joining his dad on elk hunts and fishing forays. “My grandparents always told me stories of their hunting and fishing experiences,” he adds. “Recently, I have been going fishing and hunting with a close friend, who has helped me to further refine my skills.” He took up fly-fishing a couple year back and focuses his angling efforts along the Cache la Poudre River, but also explores new rivers whenever an opportunity arises. 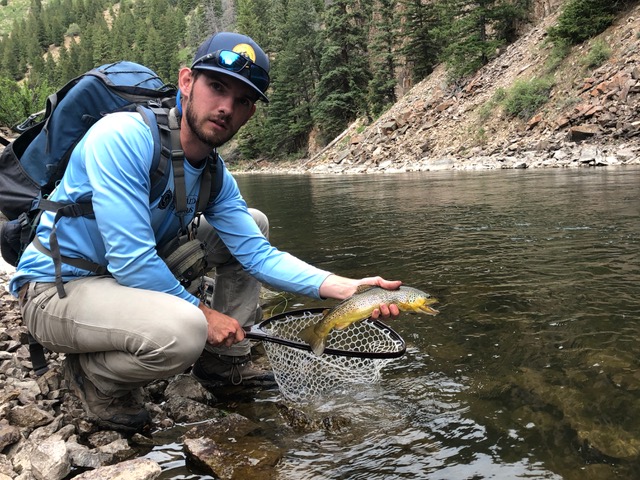 “The most common fish I catch is trout in mountain streams and rivers,” William says. He hunts big game with both bow and rifle, and chases pheasant during the winter months. “The first time I heard of BHA is when I saw a poster for the first BHA meeting at Colorado State University, setup and hosted by Matt Eischens,” he added. “After attending and hearing what the organization is about and what they stand for, I was sold.”

William lives in Fort Collins and is majoring in Wildlife Biology at CSU. He’s also a Certified Farrier by trade, which helps pay for his education. After college, he plans to apply to become a wildland firefighter and would like to pursue a career in the land/wildlife conservation field. “Most of my free time is spent exploring wilderness areas, rivers, parks and forests within Colorado looking for new hunting grounds or simply satisfying that sense of adventure that I hope to never lose,” he says. “I’m also working on summiting all of Colorado’s 14ers.”

“William’s drive to hunt, fish, hike, climb and explore our wild public lands and waters, combined with leading the CSU Club’s efforts to protect and perpetuate our great public lands estate, is reminiscent of the innate instincts that drove our nation’s greatest hunter-conservationist, Theodore Roosevelt, when he was a young man,” Colorado BHA chapter chair, David Lien (a former Air Force officer), said. “We look forward to working with William and the CSU BHA Club to help ensure that future generations of hunters, anglers and others have the same opportunities to experience our wild public lands, waters and wildlife.”

Founded by Mike Beagle, a former U.S. Army field artillery officer, and formed around an Oregon campfire, in 2004, BHA is the sportsmen’s voice for our nation’s wild public lands, waters and wildlife. With over 24,000 members spread out across all 50 states and Canada, including chapters in 39 states and two international chapters—in Alberta and British Columbia—BHA brings an authentic, informed, boots-on-the-ground voice to the conservation of public lands. Since the Colorado BHA chapter was founded by David Petersen (a former U.S. Marine Corps helicopter pilot) in 2005 (the first official BHA chapter), they’ve grown their boots-on-the-ground presence to over 1,600 dedicated hunters and anglers.

share on
See other posts related to Colorado News collegiate program
Get the latest news and stories, right to your inbox.
Search
Local Chapters