The following is an objection letter to the Draft Shoshone National Forest Plan that was recently filed by Wyoming BHA.

This objection applies to the designation of areas in the immediate vicinity of Francs Peak and the Wood River as open to, or potentially open to, OHV’s both winter and summer as depicted on maps attached to the final draft, Alternative G, of the Shoshone Forest Plan. We are also opposed to continued mountain bike use in the DuNoir Special Management Area.  As mechanized vehicles, mountain bikes are clearly excluded by the establishing law.

The revised SFP (Alternative G) offers new management prescriptions (unanalyzed) for the Francs Peak and Wood River Inventoried Roadless Areas that adversely impact high amenity resource values, disregards public intent, violates NEPA, and destroys the wild character of the Forest’s two most highly rated roadless areas. Through our analysis we have determined portions of the new motorized boundaries within Alternative G were not analyzed in any of the alternatives presented throughout the planning process.  There is not a single alternative in the Draft EIS that draws summer motorized boundaries as far west into the interior of the Francs Peak IRA as drawn into the map depicting alternative G.  There is not a single alternative within the Draft EIS that draws winter motorized boundaries across the entire Wood River Roadless Area as drawn into the map depicting Alternative G.  This is a violation of NEPA. 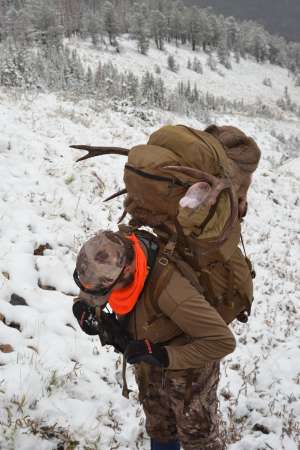 Our comments submitted during the comment period supported continued non-motorized designations for all of the large roadless areas on the SNF, including  Francs Peak and the Wood River roadless areas, and why this designation should be continued. Additionally of course, we were not allowed to comment on these major changes to the Forest Plan because they did not appear in any of the alternatives, and were made after the formal comment period was closed.

The vast majority of the area being proposed for winter motorized use is in extremely steep rugged country with rocky, braided stream channels and wind conditions that cause severe snow drifting and uneven snow cover.  Only through the construction of snowmmachine trails through steep, highly erosive soils and landscapes prone to slumping could the vast majority of this area ever be made available for snow machining.   Summer OHV use would similarly require extensive trail construction likely over the top of existing foot and horse paths.  Given the boundaries which are frequently drawn over high, windswept ridges with non-descript features, we find it highly improbable that winter OHV users could even discern where the boundaries of the open areas lie.

These two areas are rich in wildlife resources significantly because of their remote and unroaded nature. Elk abound, grizzlies make extensive use of the two areas and species such as pronghorn and jackrabbits have been observed as high as 12,000 feet in the alpine  zone.  The area is home to the largest wild sheep herd in Wyoming.  Our members make significant use of these areas for primitive hunting activities and for wildlife observation when hunting seasons are closed.

These areas are rich in cultural resources.  It can be determined that more than six hundred generations of humans have occupied these areas.  These areas are still rich in artifacts mainly because of the remote and primitive nature of the landscapes.  The opening of these areas will see a great increase in the pillaging and theft of artifacts that are found in these areas.  Law enforcement activities will never keep up with the problem, primarily because there is little law enforcement activity on the Forest.

Frankly Mr. Tidwell, after a planning process that dragged on for more than eight years, with endless meetings, updates, field trips, Cooperators meetings, the Forest Service waited until virtually the last minute, after the comment period closed, to open these two outstanding areas to OHV use.  Throughout the process we were told repeatedly not to worry, that the big roadless areas would be protected, only at the eleventh hour to see significant changes made, changes for which we had no opportunity for comment and discussion.  This is clearly not a good way to run a planning process.

We are concerned and dismayed to see OHV interests have the opportunity to make significant comments after the comment period closed, and have those comments acted upon, while other interests, including ours, accepted the Service’s conduct as legitimate and fair, only to find out that one user group had extensive access to decision makers to the very end of the process.

Throughout the process, numerous interest groups urged the Forest Service to look beyond its boundaries with regard to OHV opportunities in the Bighorn Basin. It has been frequently noted that immediately east of the SNF lies over three and a half million acres of BLM lands most of which is open to a wide range of OHV activities. And on the other side of the Basin lies the Bighorn National Forest, which has nearly a thousand miles of active OHV trails, a virtual bonanza of OHV opportunity, with trails already built and  already in use.  Tremendous OHV opportunities exist and no additional ones are neededin the Francs Peak and Wood River Roadless Areas.

With regard to the DuNoir, Public Law 92-476 clearly restricted use to non-vehicular equipment whichunder the Forest Service’s own regulations excludes mountain bikes.  The SNF has failed to enforce this part of the law and now wants to allow mountain bikes on about 7 miles of trails in the Special Management Area. This is clearly a violation of the law and needs to be stopped immediately.  We recommend that the law banning mountain bikes be enforced and the DuNoir Special Management Area be recommended for Wilderness designation.

About Wyoming BHA Chapter
share on
See other posts related to Wyoming BHA Wyoming Issues
Get the latest news and stories, right to your inbox.
Search
Local Chapters