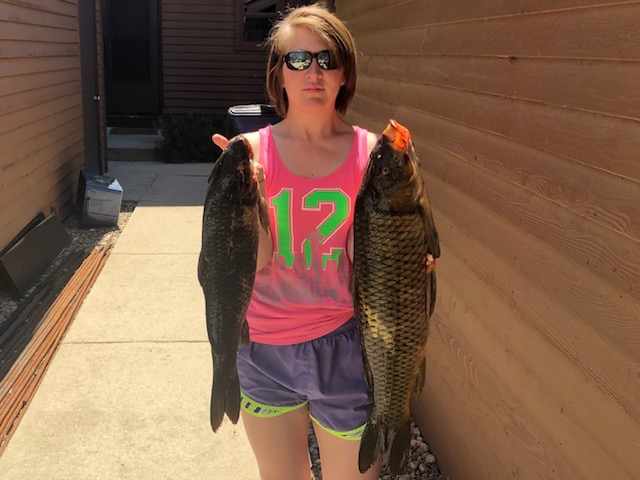 When the mercury starts to rise, hunting in Colorado hits a low. During the ongoing nightmare of stay-at-home orders (and living in a condo without air conditioning) time on the water has become my only respite. Bait fishing, fly-fishing, kayaking, frog-gigging… sign me up. But if you yearn for longer days, cool air, and tell-tale song of a loosed arrow, your daydreams can come true.

I bet you didn’t know someone could wax poetic about bow-fishing for carp, did you?

My recent bow-fishing adventure was a first for me. Trying something for the first time always comes with an air of unease, and in the sportsman’s world that unease can be a major barrier. Shooting an arrow into a body of murky water was not in my repertoire, or even on my radar. That changed when friends out at Heritage Sporting Club asked if I’d like to come out and learn. Under the spotlights, the carp swam by looking more like ghosts than fish, and I was giddy with nerves and excitement. After a successful night of carp shooting (mostly on my husband’s part), I came home with 5 huge fish. Being a self-starter is a highly regarded characteristic, but it’s no secret that having an experienced mentor can make all the difference in the safety, success, and quality of a new hunting experience. Over at Heritage they are supporting the R3 mission by offering safe, educational experiences for new hunters and giving them the chance to take what they learn in a controlled environment out onto our public lands.

Now, if you ask me, carp don’t get their due respect in the US. A single fish can provide ten pounds or more of meat, and yet they are typically discarded like an old boot. If you only read one part of this post let it be this: KEEP YOUR CARP. I’ll admit that I am highly biased against wasting any edible harvest, but with that aside I would wager a bet that, when prepared correctly, you wouldn’t know the difference between a taco prepared with carp or the frozen tilapia in your freezer. Except for that warm fuzzy feeling you’ll get by helping reduce the number of an introduced invasive species that is causing issues in lakes and waterways all over Colorado. On to the good stuff:

A quick google search for how to prepare carp will give a huge number of conflicting and sometimes quite entertaining anecdotes on how to soak carp to make it edible (que the popular ‘boil with a boot, eat the boot’ joke). I’m firmly in the camp of “I’ll believe it when I taste it” so without further ado! I introduce to you to my Carp Cooking Showdown! 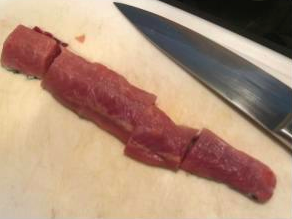 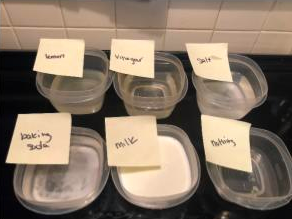 First, I cut half of a scaled, skin-on, mud-vein removed carp filet into 6 equal pieces. Each piece was soaked in one of the following: baking soda water (2), milk (3), salt water (4), lemon juice water (5), and vinegar water (6), plus an un-soaked control (1). What I found most interesting from my web research, was that the recommendations range from lightly acidic to highly basic solutions which are sure to have vastly different impacts on the fish. 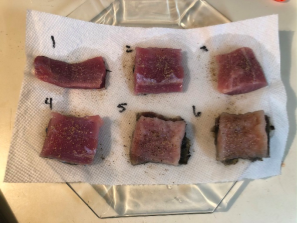 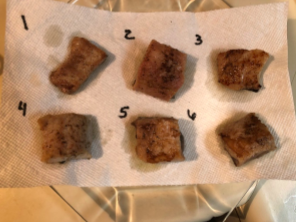 After soaking for about 3 hours, the lemon and vinegar soaked filets looked… well, kind of how you would expect. Acid cooks the filets (ceviche anyone?) giving them a pale, puckered appearance. At this point, I labeled the filets 1-6 for the blind taste test by my guinea pig / husband.

After cooking in a neutral oil with a sprinkle of salt and pepper, they all looked quite tasty! The results? Drumroll Please…….

To be honest, I expected the un-soaked fish to taste just as good as all the others, but was proven very wrong. The baking soda water and salt water soaked carp filet were both fantastic, and I don’t say that lightly. These solutions firmed up the filet, and removed all traces of murky flavor. The only difference between salt water and baking soda water was the control in salt levels. The blind taste tester liked the salt water soaked better, but I liked the baking soda water soaked carp because I have better control over saltiness during cooking. In either case, you could easily serve up the carp filet as you would any other white fish. You wouldn’t even bat an eye having it plainly seasoned over some rice.

The blind taste tester thought the vinegar + water preparation was also alright, though a bit tangy. Personally, I wouldn’t use the vinegar soak again. The filet ends up much softer, and the acidic flavor was off-putting. To me, the milk soak was up there with baking soda in terms of flavor, but the texture was much softer. Plus if you’re buying milk, who wants to waste it on soaking fish?

Now the black sheep of the bunch, lemon water soaked and un-soaked carp. Our ranking on these are 5 and 6, but we agreed both were not great. The fish soaked in lemon water was extremely slimy and tasted sour, and the un-soaked filet tasted like the water it was pulled from.

Are you surprised?? What did you think would win?

About Kassi Smith
share on
See other posts related to Colorado BHA
Get the latest news and stories, right to your inbox.
Search
Local Chapters