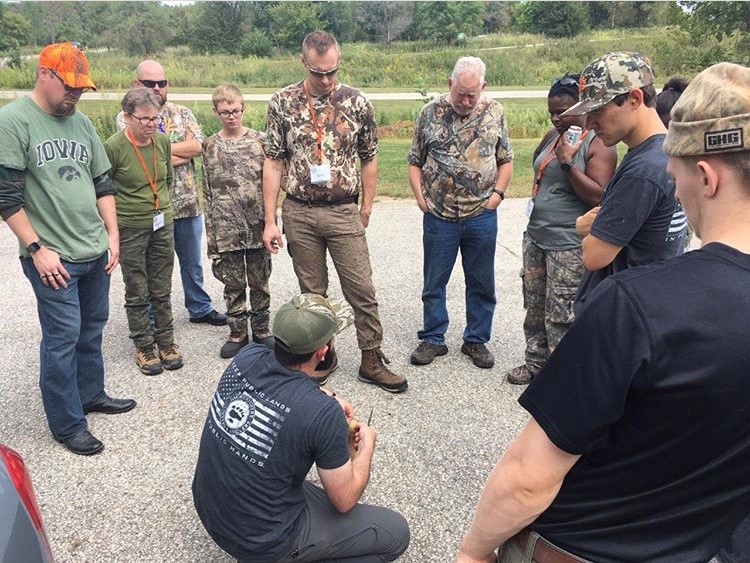 As fall winds hit the leaves, Iowa’s hunters hit the fields in search of quarry from small game to whitetails and everything in between. A disturbing trend, which is not only being seen in Iowa but nationwide, is the decline in hunter numbers. With conservation dollars and a hunting heritage hanging in the balance, Iowa BHA is taking an active stance to ensure Iowa’s hunting heritage has a bright future. This is exemplified by the Iowa chapter’s work in the field of R3.

In August, BHA collaborated with the Iowa DNR and The Scholastic Shooting Sports Foundation in conducting an inaugural “learn to wing shoot” event at the Olofson Shooting Range, in Polk City. This event featured hands on instruction from BHA members, collegiate shooting sports coaches, and members of the SSSF. After a morning of safety and shotgun basics, the nearly twenty participants headed to the range to receive hands on instruction in trap, sporting clays and five-stand with equipment supplied by the DNR. Aimed at curing the unfamiliarity associated with shooting that keeps new hunters out of the field, this event set the stage for BHA to conduct future wing shooting events.

BHA returned to the Olofson Range to host a “learn to hunt: small game” event focused on introducing new hunters to the joys of squirrel hunting. This event paired a dozen new hunters of all backgrounds with BHA members, who accompanied them through some of Iowa’s finest public lands after a brief lecture on safety and squirrel hunting 101. After the hunt, mentees were able to sample a variety of squirrel preparations in addition to a hot lunch.

Moving from squirrels to whitetails, BHA has collaborated with Edible Outdoors and the Iowa DNR to conduct a mentored bow hunt. BHA mentors have worked with new, adult hunters at weekly indoor shooting sessions to prepare them for a weekend alongside their mentor in the tree stand in early October. This is a great event, one of many Iowa BHA has been proud to partner with Edible Outdoors in conducting.

Additionally, BHA attended the annual R3 summit in Des Moines. This event is one of many meetings that seek to bring interested voices from across the government, business and nonprofit sectors together to further the innovation and implementation needed to build a strong future for R3 in Iowa. Events such as these allow Iowa BHA to maintain an active voice and productive seat at the table to ensure a strong future for hunters and anglers on Iowa’s public lands.

Iowa BHA is currently in the midst of the implementation of a new committee structure, which was adopted at the state rendezvous this August. This committee structure seeks to engage and implement the talent of the members of the Iowa chapter in order to advance BHA’s mission in Iowa. The committees include: R3; Policy & Public Land Access; Membership, Recruitment and Fundraising; Partnerships; and Social Media and Communications. Signup information will be circulating soon, but in the meantime, if you are interested and willing to donate your time and talent to furthering the future of hunting, fishing and public lands in Iowa get in touch with the board.

Lastly, the Iowa Chapter plans to attend the Iowa Deer Classic in March of 2020 to help recruit new members, catch up with current members, and help spread the word about what Backcountry Hunters & Anglers is all about.

share on
See other posts related to Iowa News Iowa BHA
Get the latest news and stories, right to your inbox.
Search
Local Chapters