Why Fight For Pine Tree — The History

The battle to defend public access to the entire Pine Tree Research Station near Colt, Arkansas may seem at first glance to be a matter of merely local interest.  Of the 11,850 acres on the property, 6,300 acres are under contract to be sold by the University of Arkansas to a private party, with rumors that the new, out of state owners plan to subdivide the land and sell it off as exclusive duck hunting clubs.  In an area with relatively few public places for hunting and fishing, local sportsmen and women stand to lose access to one of their few remaining options.  This would further exacerbate a growing problem in the region, where hunting access to private land is increasingly reserved by expensive leases.  The local population is relatively small by comparison to places like Memphis, Jonesboro, or Little Rock so why bother helping a few thousand people maintain hunting access in a rural part of Arkansas?

Understanding the history of the Pine Tree Community will help us answer this question.

The public history of the University of Arkansas' Pine Tree Research Station is relatively easy to uncover.  From the University Division of Agriculture's Pine Tree website, we learn that the University obtained the property from the US Forest Service in 1960.  Over the next 60 years the Station has been host to a multitude of research activities involving row crops, livestock grazing, and forestry development.  From the Arkansas Game and Fish Commission's web page about the Wildlife Demonstration Area they manage at Pine Tree, we know that it's managed for all manner of resident and migratory wildlife through cooperative effort with the University.

To truly understand how "Pine Tree" came to be, however, we must work our way farther back in history, to the settlement of the area and the community that developed.

In his book Pine Tree Times, Richard Owen Ellis provides us full background of the Pine Tree community in the northwest corner of St. Francis County, with details dating back to the 1820's.  We learn of the early settlers and the roads that brought the Trail of Tears through the area.  There were Civil War skirmishes and stagecoach lines.  He shares a multitude of news articles from various newspapers that operated in the area, and from these stories we learn that Pine Tree has been a community between Memphis and Little Rock for two hundred years now--"community" in the sense that the local residents share a culture and connection just as many rural communities across the country still do today.

Ellis shares many happy newspaper stories from the area in the years leading up to 1931.  There are notices of successful prayer meetings, weddings and family gatherings.  Throughout 1929 there's talk of a new road being built to help with dairy operations; plenty of rain for crops; and even a new cheese factory being built in nearby Forrest City.

The report from August 1929 discusses the new road and bridge project, and then there is a curious gap in the coverage.  By Spring of 1931, and the tone of the news has shifted dramatically.  Reports become much shorter.  The opening line from that Spring 1931 dispatch strikes an ominous tone, lacking any level of pretension and clearly stating the issues at hand:

Most everybody around old Pine Tree are living on the Red Cross and those who are not want to.  (Because of the severe drought of 1930.)

High school U.S. History courses have instilled in all of us a macro-level understanding of the Great Depression.   Boom times of the 1920's led to wild speculation in the stock market, and when the stock market crashed in 1929 and historic droughts came in the early 1930's, wide swaths of our country's population were reduced to joblessness and poverty.

But dig a little bit more into what was going on in the world of agriculture during the first two decades of the 20th century and you'll find that conservation and agricultural experts began to worry about the effects of impoverished farmers trying to squeeze a living out of marginal and submarginal land long before the Great Depression.  These experts led efforts to study the situation and develop recommendations for how to deal with problems they found.  Events of the late 20's and early 30's galvanized the movement toward a national land use program and led to recommendations for the Federal government to purchase up to 75 million acres of submarginal farmland. 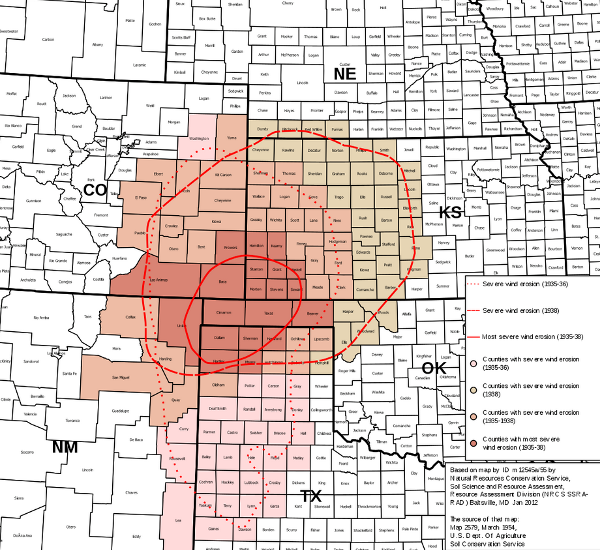 Counties affected most severely by the Dust Bowl, US Soil Conservation Service map, via Wikipedia

Mental images of the Great Depression often revolve around the Dust Bowl, which was geographically centered in western Kansas, southeast Colorado, northeast New Mexico and the panhandles of Oklahoma and Texas.  Land Utilization Projects, as the purchase of submarginal land came to be called, were much more diverse.  They ranged from Maine to California and Washington state to Florida.  Drought during the early 1930’s was extremely widespread and poor farming practices finally caught up to farmers across the country.  Over 11 million acres were purchased in all.  According to a 1965 US Department of Agriculture review of the programs from 1934 to 1964, nearly 25,000 families occupied the lands that were acquired.  Those families voluntarily sold their property to the government and relocated to new farms or to better prospects in town.

While some of these areas have gone on to become large National Grasslands under the management of the US Forest Service, many smaller parcels, like Pine Tree, have remained less well-known, though no less important areas to the local residents who depend upon them for access to land for hunting and fishing.

In Pine Tree Times, Ellis devotes chapter 56 to "The Exodus of 1936 and 1937".  He states "over 60 families relocated after selling their land.  Almost all left the Pine Tree area."  Those who remained and other local residents were able to obtain work as the roughly 11,500 acre area was rehabilitated.  Fences, barns and houses were torn down, new ponds were dug, and new sod was laid in order for the land to return to a more productive state.  A February 8, 1940, article from the Crowley Ridge Chronicle shares the scope of the work completed at Pine Tree:

Other newspaper articles from the 1940's, shared by Ellis in chapter 57, detail the progress of the rehabilitation efforts.  By 1944 the land was able to support 1,044 cattle as part of a grazing lease, and fishing was permitted without fee on three of the stock ponds.  Timber permits were available but had not yet been claimed.  According to news reports from 1948, the Arkansas Game and Fish Commission had leased the property as a game refuge.  They placed boundary markers and partnered with the local Deer Hunters Club to stock it with several dozen deer.  The club also maintained food plots in the fire lanes.  This is a remarkable turnaround in just a few years, and certainly would not have been possible without both the desire of the Federal government to step in and provide assistance and the determination of the local residents to put the work in to rehabilitate the land. 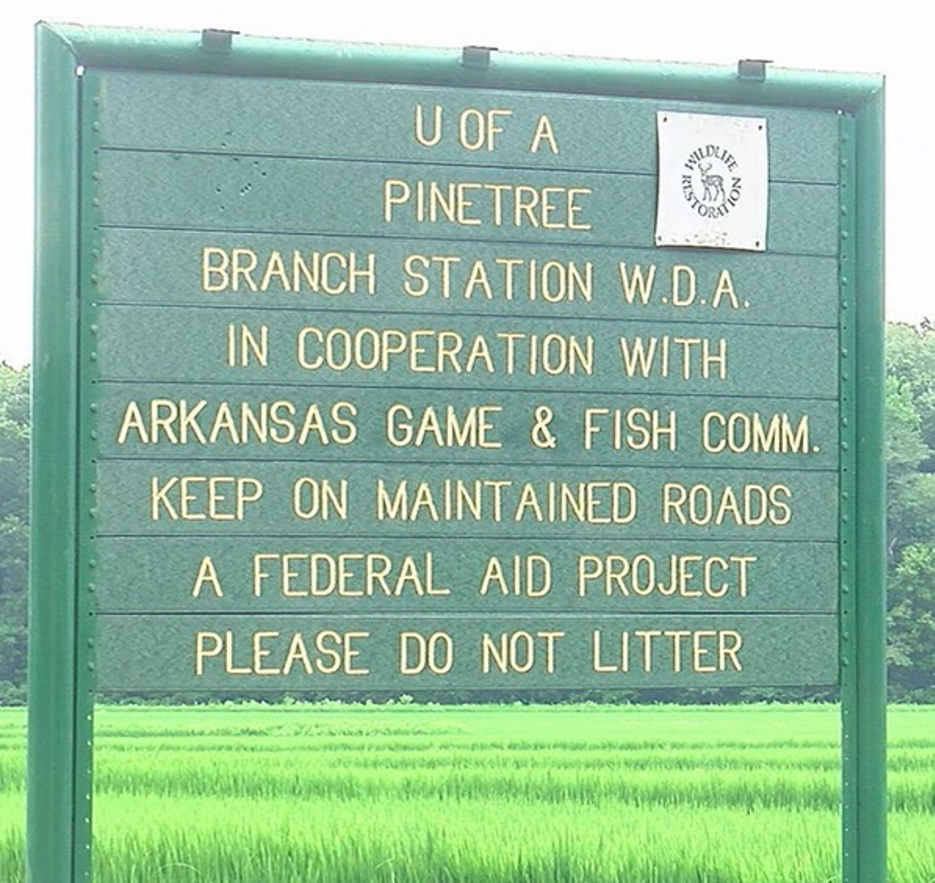 The current battle to keep Pine Tree in public hands is not the first.  Beginning after World War II, area veterans petitioned to have the property divided amongst themselves, with each receiving between 80 and 160 acres.  Then, as now, local hunters were vocal in their disapproval of such a plan.  They petitioned Congressman E.C. “Took” Gaithings to join their efforts and eventually he agreed to help stop the sale.

Over the course of the next 70 years, Pine Tree came to be managed for multiple uses including agricultural research and wildlife habitat and recreation.  Hundreds of thousands, if not millions of dollars have come from Arkansas taxpayers to develop Pine Tree into the kind of property that no doubt makes it valuable to private parties today.  This land is now attractive to people with the means to buy it and reserve the best parts of it for their own use and profit.

Despite long odds and hardship, the history of the Pine Tree area is one of community and of caring for each other.  As hunters who most likely will never have the chance to visit and hunt Pine Tree, we are called to help preserve it in the same way that members of the local Pine Tree community would have been called to help a neighbor fix a fence or raise a barn over 100 years ago.  Our reward for answering this call will be the knowledge that we've preserved a place of access for hunters of all stripes, and the hope that if or when others are called upon to help us in a time of need, they will respond in kind. 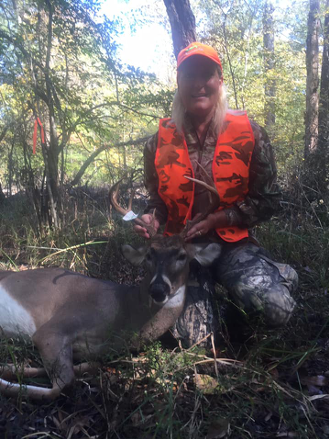 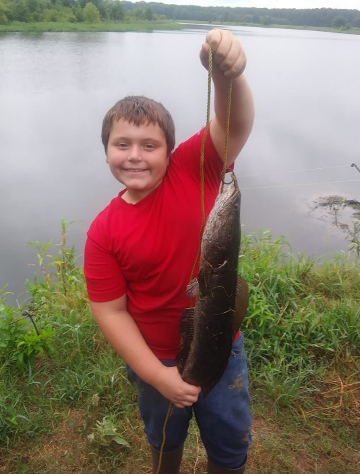 Just a few examples of hunters of all stripes taking advantage of access to the outdoors at Pine Tree.

Please take a moment to sign our petition to Keep Pine Tree Research Station Public and we will keep you up to date with the latest news and needs on this important topic.  Join or renew your membership in Backcountry Hunters & Anglers to help us continue to fight for places like Pine Tree.

share on
See other posts related to ar issues ar news
Get the latest news and stories, right to your inbox.
Search
Local Chapters