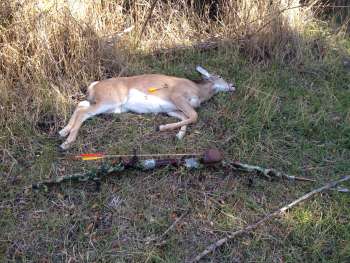 Like many hunting enthusiasts I enjoy the challenges and simplicity of traditional bow hunting.   The close proximity required by using a primitive weapon magnifies the hunting experience both in duration of the encounter as well as the intimacy provided by being within a few strides of your quarry.   This past year I was fortunate to find myself with two free weeks during the archery season and decided to try my luck on a truly challenging hunt.  The challenge was to identify a backcountry whitetail deer from afar and stalk up to within shooting range using my traditional bow.  This hunt seems commonplace at first, but in reality, such a hunt is rarely done.  Backcountry whitetails with their sharpened senses and skittish nature present a tremendous stalking challenge.  Thus backcountry whitetails are often taken with more sophisticated weapons at distance, by ambush from ground or tree stands, or by chance encounters on a stalk.

With this idea in hand I set about developing a set of rules for the hunt and reviewed it with several experienced hunters with whom I have the pleasure to know.  What emerged were the following conditions...

With these rules of the hunt I was excited to test my hunting skills.  I selected a parcel of backcountry public land in Montana that receives little pressure from other hunters that could interfere with my pursuit.  The terrain was flat with mixed forest, clearings, and riparian areas.

The hunt started in early October, and I soon found the conditions unfavorable with dry leaves covering the ground.  Over a four-day period I had about 5 stalking opportunities where I could see the deer from afar and move in on them, but without being able to mask the noise of leaves underfoot  I was not able to close the distance to within 20 yards.  Other times I lost the deer in the thick riparian vegetation and could not determine where they had traveled.  The deer were quickly emerging as the victors.  After these failed attempts, I decided to wait for some rain or snow to help even the odds.  Fortunately I only had to wait a few days for a rain shower to dampen the forest floor.

On the seventh day I started my afternoon hunt at around 12 pm.   My plan was to check out a backflow channel where I had seen several whitetails feeding on previous evenings.   Not knowing precisely where the deer were located I checked the winds and started a long slow stalk until I was about 200 yards from the feeding area.  This was about 2 pm and I was rewarded with four doe feeding in the channel.  As in previous encounters I tried to pick the deer I would target.   All four were doe but one was set apart and slightly smaller.  This gave me the ability to identify it during the stalk.  My choices for the stalk included moving directly through the riparian vegetation on the sides of the channel or to crawl up the sands and cobbles of the channel.  The riparian vegetation provided excellent concealment but it is so thick you are limited to existing trails. The channel offered almost no concealment but the wet, sandy ground provides excellent noise suppression.

I decided to cut the first hundred yards through the riparian vegetation and moved quickly to close the distance before the deer ventured farther away.  A feeder trail emerged within about 80 yards of the deer who were still upwind, but I was forced to close the final distance in the channel.  The four deer appeared to be relatively content and so it provided some time to study the situation.  The channel, though wide, was curved and the side I was on was steeply banked.  I decided that I could belly crawl along the bank and use this as background camouflage.  In a few spots furrows in the channel provided some concealment to advance.  Fortunately there was no standing water in these furrows to create splashing water noises, a mistake I learned from a previous stalk.

Each movement was excruciating as I felt the deer would at some point notice me.  I dragged my bow and arrow along next to me, an advantage of a light wooden bow.  Knowing the deer would not feed for an extended period of time I was constantly looking for the best means of concealment for the path forward.  As I closed the distance two of the doe slowly moved about 40 yards away while continuing to feed.  My quarry was still the closest deer and did not move from her original location, but it gave me a sense of urgency as she might choose to follow.

Finally I reached a low shrub no more than 15 inches high and ranged the doe at 18 yards and her partner at about 25 yards.  The doe was in range for at least a short time and I finally had an opportunity.  I knew the biggest risk of the day would have to be taken as I moved to my knee to take a shot. It is interesting how tough it can be to leave a concealed position after a long stalk and take a shot.  Having made mistakes like this in the past I rehearsed my movements in my mind.  I checked my bow and arrow, repositioned my finger tab, and made sure no clothes would catch on my gear as I rose to shoot.   The doe was oriented broad side which was great for a shot but was not conducive to getting into a shot position.  I decided it was best to wait until both deer were oriented away and then rise to prepare a shot.  As soon they were both turned away I rose as fluidly as possible to take a shooting position.

Instantly I became aware of my mistake.  For as I rose to the kneeling position the two deer that earlier had moved away were looking right at me and immediately bolted for cover.    Of the pair in front of me the doe 25 yards away moved quickly to follow the others, but the remaining doe was not sure in which direction to move.  The doe, with her head up, took a tentative step to her right to read the winds, providing a perfect broadside.

My release was clean and the arrow flew.  I saw the arrow fly past the deer into the sand as the deer bolted into the riparian vegetation.  After a nearly four-hour stalk and six days in the field hunting this was the only shot opportunity and I had missed.  A few curses were exclaimed as my pent up adrenaline worked its way through my system.  Lying on my back in the sand I took a few minutes to relax. Finally I went to retrieve my arrow.  To my surprise the arrow was sticky with blood and sand.  The arrow had passed through the deer so cleanly I thought I had overshot her.  I went back to the doe’s position and saw a few speckles of blood.  I decided I would wait for 45 minutes and then follow the deer from where it had entered the riparian vegetation.   As we all know that can be one of the longest periods of a hunt so I used the time to clean the arrow shaft and fletching in a nearby pool of water.

After following the first thirty yards of the game trail I did not see much blood and I became concerned.  Fortunately, from where I stood I could see the deer ahead on the trail lying on its side.  Upon closer examination, the doe was actually a button buck, which probably explains the tentative movements of the deer that enabled the shot.  Because so much hard work had gone into this deer, to me it was one of my all time favorite hunts.  Often hunt success is measured using proxies that do not account for hunting skill.  This whitetail challenge was the closest I have come to the essence of fair chase and portrays yet another reason to preserve opportunities for backcountry hunting and access to wild game.

About Kyle Blasch
share on
See other posts related to wisconsin news
Get the latest news and stories, right to your inbox.
Search
Local Chapters