Where Do the Presidential Candidates Stand on Ownership of Our Public Lands? 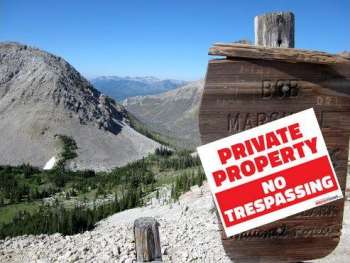 The presidential primaries are under way, with “Super Tuesday” taking place on March 1. On this day, a dozen states and American Samoa are holding their nominating contests for the general election this coming November.

Backcountry Hunters & Anglers is invested in conserving important backcountry lands and waters, upholding and expanding public access to those places and, of course, ensuring that U.S. public lands remain firmly in the public’s hands. BHA remains strongly opposed to any efforts to sell, transfer or otherwise divest ownership of these lands from you and me – the American people.

Where do the presidential candidates stand on this important issue?

Recently the Reno (Nevada) Gazette-Journal contacted all of the candidates to ask them their views on a range of issues – including public lands management and whether management of these lands should be transferred to states. Not all the candidates provided answers. But the responses that were received are listed below, appearing in alphabetical order by the candidates’ last names.

Public lands in Nevada and across the West provide a wide range of benefits, from open spaces for recreation to resources that support grazing, energy production and other uses. It is vital that the priorities, needs and vision of local communities help shape the management of America’s public lands, and I would work to improve and support local, state and federal collaboration.

The federal government controls far too much land, especially in the Western states like Nevada. While there is clearly a legitimate role for federally owned and managed land in certain situations, we must empower states and tribes whenever appropriate. I believe we should institute a top-down review of all federal property, including land, to help determine what should stay in the federal government’s purview and what should be returned back to states and localities.

Public lands should be managed for the benefit and enjoyment of all Americans, and not just the oil and gas, mining, and timber companies that have had disproportionate influence in management decisions on federal lands.

But to my mind, we must end the sweetheart mining concessions and leasing rate practices that allow these industries to profit at the expense of American taxpayers.

We must ban all fossil fuel extraction from public land, and I have co-sponsored important legislation to do just that.

The debate over ownership of public lands cannot, and must not affect Native American treaty rights and Tribal Sovereignty.

We cannot let the actions of a fringe group of extremists undermine the United States’ historic trust responsibilities to Native peoples.

It is time to modernize that trust relationship, by moving away from paternalism and control, and toward deference and support. As president, I pledge to do just that, and I will look to Native American leaders to guide me in that goal.

Over 80 percent of the State of Nevada is “owned” by the federal government. The issue is not that so much of the state is public land; it is how that land is managed. The Department of Energy and the Department of Interior must find ways to work with state and local governments to make sure that public lands are used to the best purpose. As president, I will make sure that the Department of Interior and the Department of Energy give as much access to the people of this country as possible and that these departments will make sure that useful development of the land for cities, counties and the state will not be hidebound in needless bureaucratic red tape. Congress should address this issue on a much larger scale and make the determination on how federal lands should be managed by the executive branch, state and local governments.

Finally, Ted Cruz did not respond to the Gazette-Journal’s request. But he’s been open about his views on public lands ownership. Learn more.

Given Super Tuesday’s importance in determining a candidate’s national electability, the stakes are high – and will remain high – for the future of our public lands and outdoor traditions. Now is the time to make our voices heard as sportsmen. Sign BHA’s Sportsman’s Pledge and pledge your support of public lands conservation and continued public ownership of these irreplaceable lands and waters.

share on
See other posts related to issues bha news
Get the latest news and stories, right to your inbox.
Search
Local Chapters