The following was written by BHA's Conservation Director, Holly Endersby of Pollock, ID. 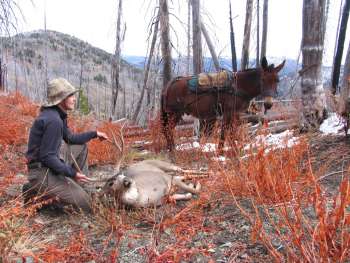 It may be 100 degrees out today but my thoughts are beginning to turn to the cooler days of autumn. At 7,000 feet, our hunting camp on the edge of the Hells Canyon Wilderness is a paradise of cold, clear water gushing from a fissure in the ground, remnants of stately white pine forests interspersed with subalpine fir, and rimrock from which to glass for mule deer. There’s nothing I like better than welcoming the day sitting on an outcrop ready to glass the surrounding rims for mulies in the early morning light.

But six years ago my opening morning of deer season was shattered by the sound of an ATV moving slowly at first light, far past the sign prohibiting motorized use beyond that point. I saw one deer running for cover and that was the last deer I saw that trip. Back home, I called the Forest Service and talked to the Recreation Specialist about the incident: he was dismissive saying the area was too remote for an adequate patrol. The next year was worse. ATV riders set up camp in the meadow beyond the closure sign and rifles began going off at dusk the night before season. This time I called the sheriff and the forest service from my satellite phone to turn the illegal hunters in. Unfortunately, nothing came of that call either. Finally, my husband and I decided to meet with the district ranger and the Forest

Supervisor when we returned from hunting and invite them to go into the area with us and our packstring. Neither the district ranger nor the forest supervisor had ever been into the basin where we hunt. The first year our planned trip was called off due to wildfires. But we persisted and the following summer the ranger and supervisor went in with us. We stopped at an overlook allowing a view into the deep canyon, the icy cold wild and scenic river coursing through it and the still snow-capped peaks above. The district ranger turned to her boss and asked, “Does this look like a place that should have ATV’s running all over it?”

That winter, the Forest Supervisor made the decision to enforce a seasonal closure for wildlife security to the trail 4 miles further back from the delicate meadow beginning in late August for the start of bow season. The Supervisor took considerable heat from locals and county commissioners but stayed the course. A grant was awarded the forest service and a gate was installed at the campground ATV riders were using as their launch site. Last fall was the second year of the closure and once again it was magical to be a part of the quiet that envelopes this high country basin.

But none of this would have happened if we had given up. And that’s what makes BHA different: our members stand up for wild country and we don’t give up until we get the protection it deserves. Is it easy? Of course not. Is it worth it? Oh, yeah.

Join the "sportsman's voice for our wild public land, water and wildlife" today!