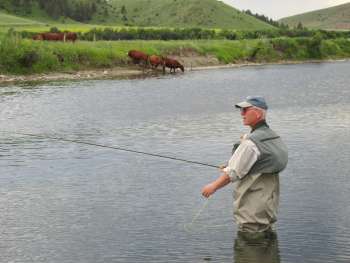 Our organizations represents thousands of hunters and anglers from the American West who have a vital and vested interest in the sustainability and accessibility of quality fish and wildlife habitat for both present and future generations. The Land and Water Conservation Fund (LWCF) has played a critical role in conserving some of the West’s most important fish and wildlife habitat  and publicly accessible hunting and fishing areas. We request your support for full funding of LWCF in fiscal year 2015.

Some of the most memorable and iconic hunting and fishing experiences of the West can be found on public lands that have benefitted from LWCF funding. A few examples include: Montana’s Tenderfoot Creek, an 8,200 acre checkerboard consolidation in the Little Belt Mountains that is home to a large elk herd and world class wild trout fishing. This acquisition is currently being made possible by LWCF funds. The Greater Little Mountain area in Wyoming is one of the most popular hunting and fishing areas in the state, and LWCF funds were used to acquire the 11,179 acre Devil’s Canyon Ranch, a premiere hunting area with important herds of bighorn sheep, mule deer and elk. Another excellent LWCF success story is the Lake Mead National Recreation Area along the border of Nevada and Arizona. It remains one of the most popular fishing and boating destinations in both states and its fisheries are enhanced through LWCF dollars.

The Land and Water Conservation Fund is one of the West’s most important tools for conserving fish and wildlife habitat. These funds provide sportsmen’s access to millions of acres of land, supporting the multibillion dollar hunting and fishing economy. With the knowledge that quality access is among the greatest threats to the future of hunting and fishing in the Western United States, it is imperative that LWCF remain a priority for Congress.

On behalf of Western sportsmen, we urge you to make the Land and Water Conservation fund a priority in fiscal year 2015 and beyond.

share on
See other posts related to issues access lwcf
Get the latest news and stories, right to your inbox.
Search
Local Chapters