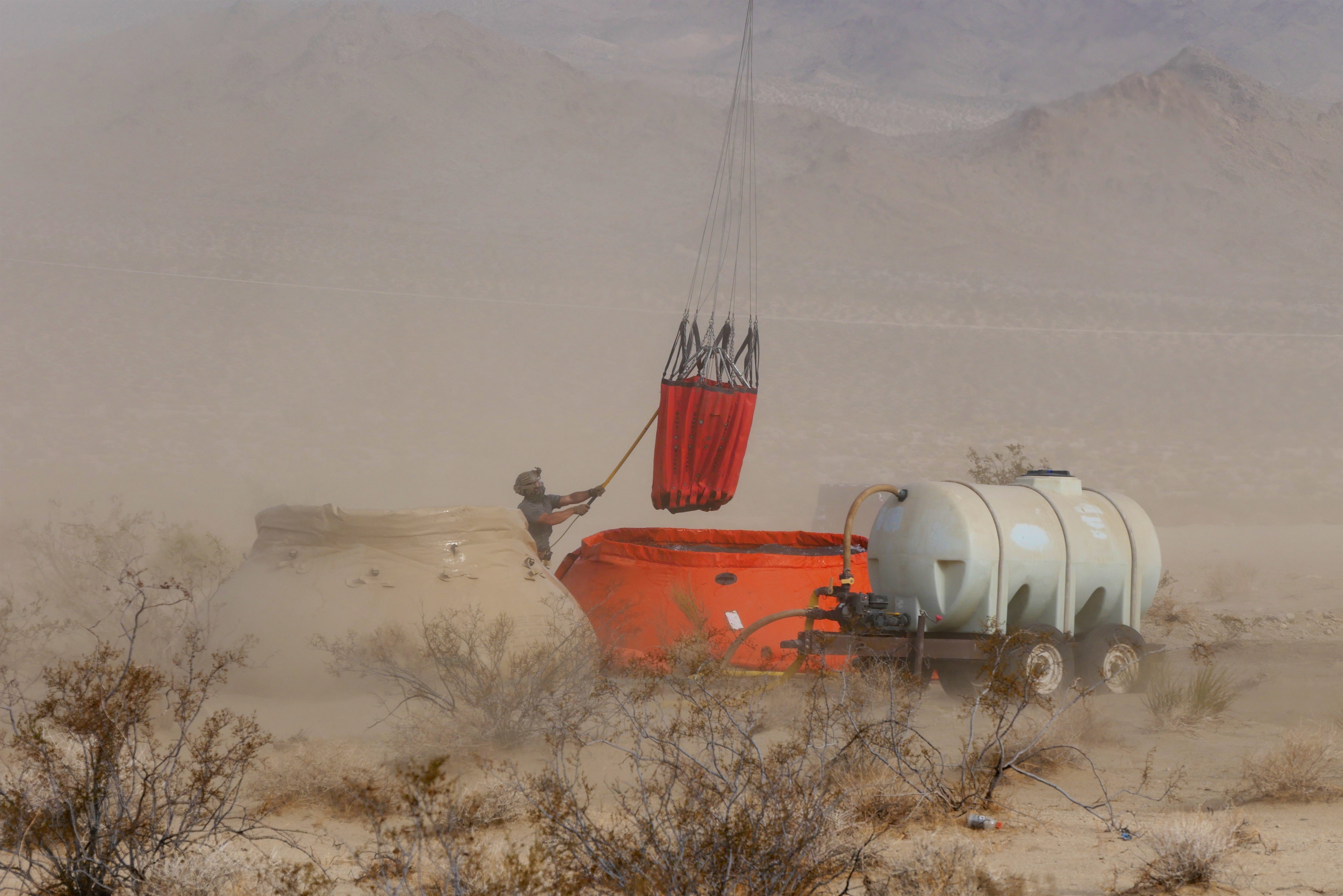 BHA’s California chapter, Armed Forces Initiative and the Marines team up to save bighorn sheep

While the devastating fires of the Western states have become a perennial hazard jeopardizing the lives and livelihoods of American citizens, the heat and unprecedented drought preceding these fires is the larger threat to much of the wildlife. Hundreds of species are threatened by climate change and severe weather across the West. In the Southern California mountains, there lives a particularly vulnerable, and in some parts endangered, example.

Ovis canadensis nelsoni, desert bighorn sheep, are native to Southern California. Within this subspecies, a genetically diverse group, the Peninsular population, has been identified as endangered by the federal government. Peninsular desert bighorn have declined drastically due to human development centered around the sparse natural springs in these austere climes. While the federal government has set a goal for recovery, it has not yet been realized. This summer, the drought across the Southwest became an existential threat for the already endangered sheep population.

Due to the lack of natural water sources, various agencies and conservation organizations have placed artificial watering holes called “guzzlers” in strategic locations throughout these arid ranges. Many of these guzzlers are in remote and dangerous locations where temperatures regularly exceed 110 degrees in the late summer months, and the feasibility of hiking in does not exist for the better part of the day.

Faced with the decimation of these sheep, Scott Gibson, a member of BHA and the Society for the Conservation of Bighorn Sheep, reached out to Brett O’Mara, the head of the BHA Armed Forces Initiative’s Camp Pendleton club, hoping for support from the Marine Corps. Brett, until recently, worked on Marine Corps Air Station Camp Pendleton and knew BHA members in Marine Light Attack Helicopter Training Squadron 303 who were willing to examine the feasibility of delivering much needed water to the dry guzzlers.

Capt. John Zimmer took the lead for the helicopter crews and began coordinating with Gibson. The general plan was to fly UH-1Y utility helicopters using “longline” external sling loads to carry water from temporary reservoirs to guzzler sites located in Anza-Borrego Desert State Park, the Sheephole Valley Wilderness and Marine Corps Air Ground Combat Center 29 Palms. Over the next several weeks, close to 30 hours of detailed planning between Gibson and Zimmer set the conditions for a four-day operation with two UH-1Ys and a team of 10 Marines.

On a Friday afternoon at the end of August, the section of UH-1Ys departed Camp Pendleton with the intent to land and Remain Overnight (RON) at a staging/camping spot adjacent to the area of operations for the first day. This RON would facilitate detailed face-to-face planning prior to execution the following morning. Due to in-flight malfunctions, only one of the UH-1Ys was able to make the campsite. After a detailed brief between the air and ground crews, everyone relaxed and enjoyed being part of what was to become an incredible success.

During the rehearsal flights, the UH-1Y crews determined the heat during the middle of the day made operations prohibitively dangerous. To mitigate the high temperatures and strong orographic winds, the crews decided to start the mission as early in the day as possible. This meant some ground personnel needed to start their hike to the site at 3 a.m.

Capt. Zimmer and his crew hit starters at daybreak and executed flights into the Carrizo Mountains of Anza-Borrego Desert State Park. There were two guzzlers that needed water: one on Whale Peak and the other in Harper’s Canyon. With only a single aircraft available that morning, the decision was made to prioritize the guzzler at Whale Peak. This seemed to be the right call as the crews on the ground found several dead sheep directly adjacent the Whale Peak guzzler. 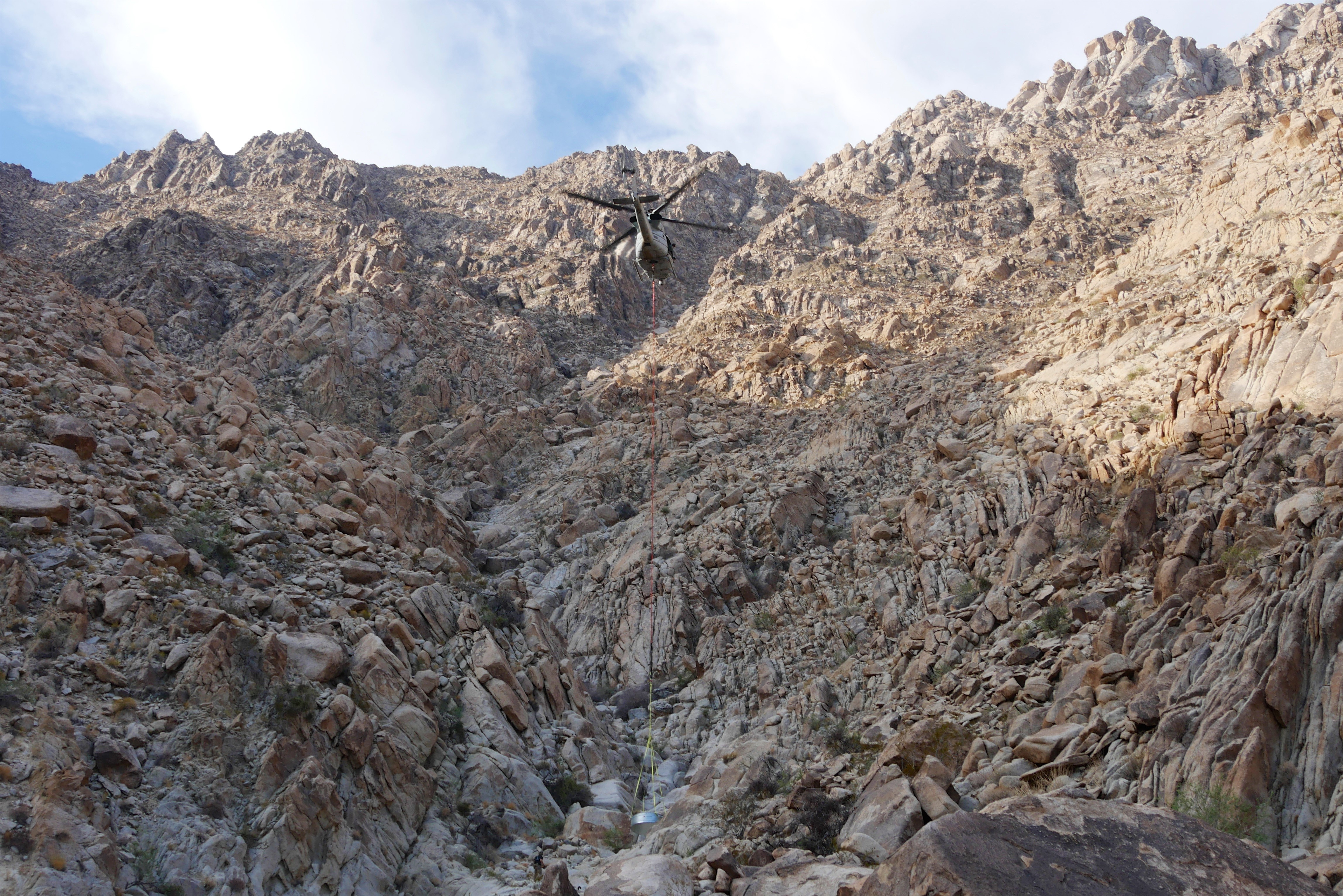 At each location being serviced, trucks drove as close as possible to the guzzler and set up a dip site. At the dip site, the trucks transferred their water to a large open pool called a “pumpkin.” (The name comes from its round shape and orange color.) Prior to receiving water, a large tin pool was assembled as a temporary reservoir, from which the water was either pumped or gravity fed into the guzzler. Once the conditions were set (pumpkin established, personnel inserted and equipment assembled), the helicopters started hauling water from the pumpkin to the guzzler. At the pumpkin, the helicopter would hover, dip its large bucket, and retrieve approximately 225 gallons of water. The full bucket was then flown to the guzzler site and emptied into the temporary reservoir. The helicopter crews continued running back and forth between the pumpkin and guzzler until the site was replenished, pausing only to refuel.

At face value, this appears to be straightforward. However, trying to align a bucket of water weighing 2000 pounds, dangling from a 120-foot line, with a target that is only 10 feet across requires careful coordination with ground personnel and incredibly fine airmanship. As the helicopter hovered the bucket over the target, the Marines on the ground used a long stick and hook called a “static wand” to steady the bucket and guide it to the reservoir. They did this nonstop for over six hours, all while subject to the extreme heat, sun exposure and sand blasting rotor wash from the helicopter.

This first day was arguably the most important as 60 percent of all the Peninsular sheep reside in Anza-Borrego Desert State Park. The guzzlers in this area are the sole water source for the breeding ewes. The sheep in this area are the literal seedstock used to propagate and replenish the population throughout the entire Southern California range. If the sheep here are lost, the rest may well disappear.

On day two, both aircraft flew into the Sheephole Mountains located north of the sites in Anza-Borrego Desert State Park. While the Peninsular sheep are known to travel this far north, the population of sheep in this area are understood to be the more ubiquitous desert bighorn sheep and are discouraged from mixing with the Peninsular herd due to I-10 freeway.

The final day required further coordination with the environmental team from MCAGCC 29 Palms, located east of the Sheephole Mountains. There are no longer any natural sources of water anywhere on this expansive base. Currently, there are less than 20 sheep on 29 Palms, but their numbers are increasing. Interestingly, genetic testing has shown sheep from on the base and sheep from the south and west of the base have been intermixing. Biologists linked the sheep on 29 Palms to sheep from as far away as those in the Sheephole Mountains. A large part of their comeback is owed to Society for the Conservation of Bighorn Sheep for building guzzlers on the base to help increase the population.

Many critical populations of sheep throughout Southern California now have water which should last them until next spring. According to Gibson, nothing this large or complex had ever been attempted in the service of these animals.

The mission was a huge accomplishment. Many critical populations of sheep throughout Southern California now have water which should last them until next spring. According to Gibson, nothing this large or complex had ever been attempted in the service of these animals. By using Marines and their helicopters, those involved were able to get drought emergency water to critical populations, which would not have otherwise been possible.

From the pilot’s perspective, it is a rarity to practice with the bucket, and the significance of the proof-of-concept for longline operations is not fully comprehended. The Marine Corps now has new capability to train and fight with. The historical precedent of UH helicopters extracting wounded on external stretchers out of mountainous terrain in the Middle East makes this type of flying paramount for the efficacy of Marine Utility Aircrew. Additionally, the training received by the Marines on the ground was found to be as worthwhile as it was to those in the air.

Camp Pendleton BHA AFI was the catalyst that brought the critical capability of the United States Marine Corps to the fight in support of California’s desert bighorn sheep. The conservation of this animal should provide the reader with hope and a sense of pride in our organization. I want to leave you all with this: Give a critical thought to the people and groups around you. The willingness to ask for help, and the constitution to follow through, may save another part of our nation’s wildlife and lands, without which our nation loses much of its worth.

This article first appeared in the Winter 22 issue of Backcountry Journal. Join BHA to get 4 issues a year right in your mailbox. 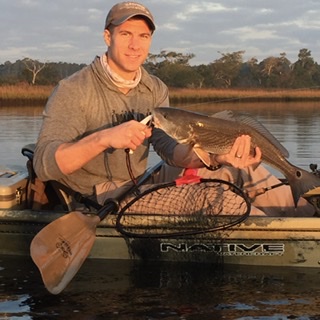 BHA member Evan Nordstrom lives in Virginia with his family.