Was It Worth It? By Doug Peacock

Doug Peacock’s collection of stories in his most recent book, Was It Worth It?, proves his obsession with and loyalty to a life lived on the edges of civilization. Peacock is a man who went further, deeper, and spent more nights in wild places than most. He was so exceptional that Edward Abbey modeled his infamous character George Hayduke on him: a character willing to fight and die for wilderness and wildlife. 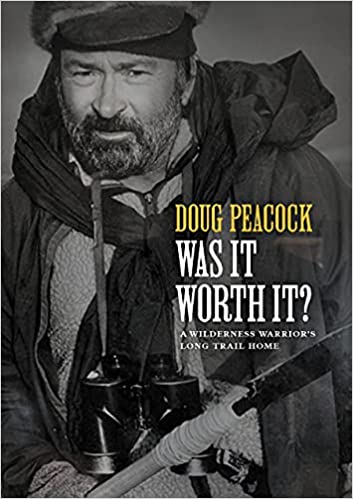 After coming home from being a medic in Vietnam, Peacock found solace in wilderness settings including Glacier National Park and Yellowstone and migrated each winter to the southwest deserts. On the former grounds, he found humility and awe in being around grizzlies bears, an animal that could quickly devour humans but most often doesn’t. Peacock knows bears like only wildlife biologists can, but his knowledge isn’t gained from a textbook; it’s based on firsthand experiences in the field. He had over a thousand encounters with bears and was charged a dozen times—but the bear always veered off at the last minute. Peacock’s gripping tales lead the reader on hikes tracking jaguars and searching for the last grizzlies in Mexico’s Sierra Madre; to the polar regions of the high Arctic tracking polar bears, fantasizing about tigers in Siberia, and exploring tropical birds in the Galapagos. He is a wilderness prophet crying for visions on mountaintops and deep in the jungles. His words are a testament to a man obsessed with the natural world, words the contemporary world needs to pay heed to.

Views expressed by the book authors or reviewers are solely their own and do not represent Backcountry Hunters & Anglers.​

Purchase Was It Worth It? on Amazon Smile, and register Backcountry Hunters & Anglers as your preferred nonprofit to give back to your wild public lands, waters and wildlife.

share on
See other posts related to the campfire backcountry journal required reading
Get the latest news and stories, right to your inbox.
Search
Local Chapters