We are proud to be part of this conservation effort to support the sheep of the Swakane herd.  Continued support from our members, via membership or donation, helped support these efforts! 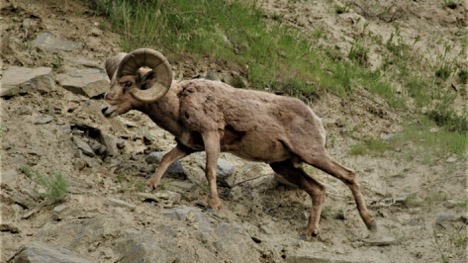 You have to go back to 1969 to find the first nine sheep to hit the ground in the Swakane Unit of Washington State.  The sheep were brought to the Swakane location, translocated from the Colockum herd which roams south of Wenatchee in the Colockum Wildlife Area.  In turn, the Colockum herd was originally brought to the area from Williams Lake, British Columbia.  The Swakane herd, which by 2019 consisted of 220 animals, uses the area from Wenatchee north to the small riverside town of Entiat, WA, utilizing cliffs and break country above the Columbia River.  North of the Swakane, additional sheep herds are intermittent with the next closest 15 miles away near Chelan, known as the Chelan Butte herd.

The Swakane herd offers a once in a lifetime hunting opportunity.  Since 1999, the Washington Department of Fish and Wildlife (WDFW), has allotted just two mature ram tags per year.  In 2020, 6,862 applications were submitted for this highly coveted opportunity.  In Washington, you do have the opportunity to draw every year, but with so many people applying it takes an average of 18-20 years, if ever, to draw.  However, for hunters lucky enough to draw this tag, they can expect record-book-pushing rams on the cliffs above the river, and easy access from the ever busy Highway 97A, which borders the river.

While Highway 97A may grant easy access to the Swakane herd for hunters, it has been a major killer of bighorn sheep and mule deer for years.  Every year since 2002, vehicle traffic, by average, has killed more sheep than hunters, which is as far back as records go.  In the seven-year period of 2002-2009, 24 bighorn sheep were killed on the highway as a result of vehicle collisions. 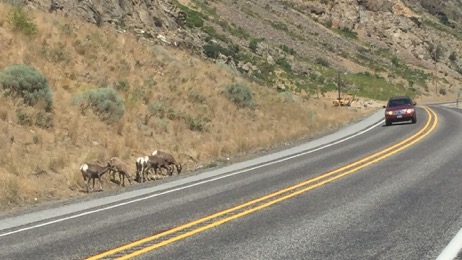 As a response, in 2009 several groups including the Wenatchee Sportsman’s Association, Washington Department of Transportation, WDFW, and local landowners came together to fence 8.4 miles of the 97A corridor.  This fencing project has reduced bighorn sheep vehicle collisions by an average of 85%.  However, in this steep and cliff-strewn habitat, falling rocks consistently take out major sections of fence so maintenance is always needed.  As a response to this issue, the Washington Chapter of Backcountry Hunters and Anglers stepped up to monetarily assist the Wenatchee Sportsman’s Association and the Wild Sheep Foundation fix the fencing.

The story doesn’t end there.

One of the largest threats to bighorn sheep is disease. The success of the Swakane herd is due in large part because it has never had a documented population-level breakout of any virus, bacterial infection, or mite infestation.  This is remarkable considering encroaching human populations bring domestic animals, carriers of bighorn sheep diseases, ever closer to the Swakane herd and increase the likelihood of disease transmission.

The main disease threat to bighorn sheep is from the bacteria Mycoplasma Ovipneumoniae, which is carried by domestic sheep and goats. This bacterial infection causes pneumonia in bighorn sheep, typically resulting in an all age die-off throughout the herd during the first year of exposure. Initial mortality rates can vary dramatically from only 5-10% to well over 50%.  Bighorn sheep surviving an initial exposure are considered resistant, but some of these remaining animals (estimated between 5% - 15%), will be either intermittent or chronic carriers of the bacteria. These carriers will then transmit this pathogen to the annual lamb cohort, causing a significant reduction in lamb survival. This kind of within-herd transmission can go on for decades and lead to population reduction and potentially extirpation.

While the Swakane herd may have, thus far, avoided a disease outbreak in their herd, the threat still exists. A local land owner with property adjacent to the Swankane herd pastures a large number of domestic goats, creating a high risk of disease transmission to the wild sheep.  The problem is not the goats escaping their pasture, but sheep have been seen walking right next to the property owner’s fence.  The chance of nose-to-nose contact and transmission from infected soil around the property is a risk WDFW could not take.

A secondary fence has been proposed to keep the sheep from interacting with the domestic goats, ensuring this disease-free herd stays healthy.  With a contractor already set up to make repairs to the fence, WDFW scrambled to secure funding for the additional fence.  While WDFW is covering the main cost, three groups again stepped up to secure the remaining funding and ensured this important fencing is being built.  These groups are Wenatchee Sportsman’s Association, Wild Sheep Foundation, and Washington Chapter of Backcountry Hunters and Anglers.

For the Washington Chapter of BHA, helping to fund the fence project was a clear way we could increase the security of wildlife on public land.  Though very few will have the opportunity to pursue a ram from the Swakane herd, simply knowing they roam the hills and having the ability to see them is invaluable.  If you can make it happen, October is an excellent time to come watch and listen to the echoing cracks of rams, high on the cliffs above the highway, battling out the right to breed. 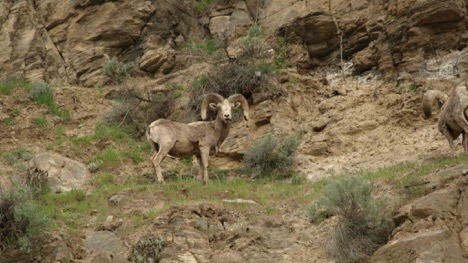 We wish to thank all other supporters of these projects, including WDFW, Wenatchee Sportsman’s Association, and Wild Sheep Foundation.

Our members also deserve thanks, for their membership and donations make these projects possible.

Do you have questions or want to become more involved?  Reach out to us on our social media channels or via email [email protected]!  We would love to hear from you and any projects you have in mind.

Also, keep an eye on our social media pages to keep up on important information regarding hunters and anglers, where we share member and public-specific action items.  We certainly need your voice in maintaining our traditions here in Washington!

I am on the WA board located in Wenatchee. I enjoy getting out hunting almost year round for everything from chukar to elk. On many of these adventures my two kids 8,9

share on
See other posts related to Washington News
Get the latest news and stories, right to your inbox.
Search
Local Chapters