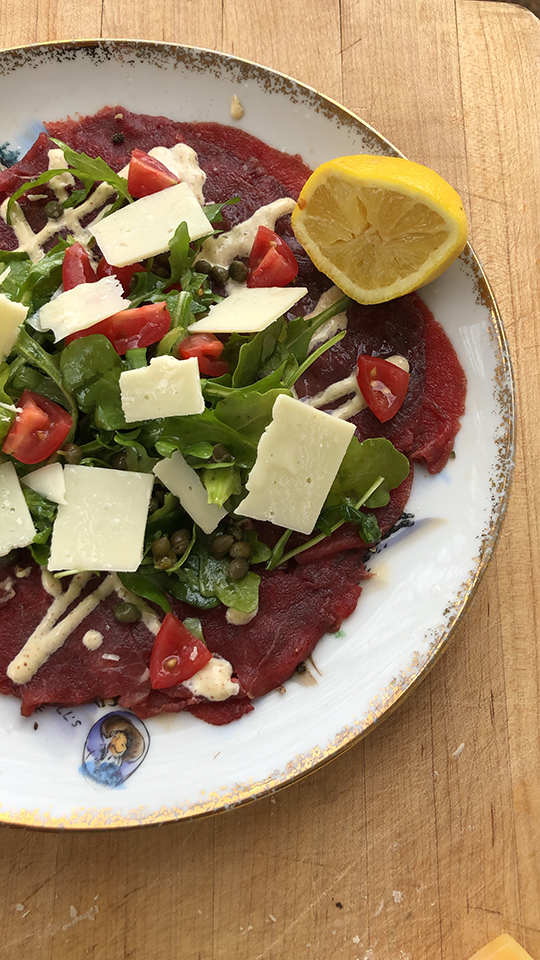 I was introduced to carpaccio about a year ago while doing prep work in a commercial kitchen. At the time, we used beef eye of round from steamship rounds we butchered in house. This is an exceptional cut for carpaccio, but in the back of my mind I had a feeling that venison loin would be even better. It turns out I was right.

Carpaccio first arrived on the culinary scene in 1950, dreamt up by Italian restaurateur Giuseppe Cipriani. Cipriani was the owner and founder of Harry’s Bar in Venice, a one-time haunt of Ernest Hemingway, Orson Welles and Truman Capote, just to name a few.

The dish is deceptively simple: thinly sliced raw meat (usually red meat, sometimes fish) carefully arranged on a plate with a dressing of mayonnaise-based sauce painted across the surface. In its best incarnation, though, carpaccio incorporates other elements in addition to the sauce – capers, olive oil, a squeeze of fresh lemon, a side of arugula salad and some thinly sliced parmesan cheese.

Carpaccio is a great way to make use of your venison loin, and it gives the hunter a rare opportunity to taste game meat in its most natural form – completely raw. Serve alongside some crusty French bread with a good pilsner or witbier.

Travis Hall is a writer, hunter and angler based in the Bitterroot Valley of Western Montana