This last season was my first deer season, and as such I was blessed to take down two does. Since I was using a rifle, I was able to get good shot placement resulting in little meat loss—and no caul fat loss.

Caul fat is mysterious—lots of folks don’t realize it’s there, and even when they do, it is sticky, stringy and appears difficult to deal with, especially if you are breaking apart your animal entirely in the field. However, I had made a promise to myself that I would consume every part of the animal I took down, or at least most of it (which in retrospect, I probably could have gotten more). So I took pains to retain and pack out the caul fat from my deer. Most recipes, such as the Meateater one most of us are most familiar with, are not creative and do not do full justice to this unique and versatile ingredient. The caul fat I brought back had some debris on it, and as such I didn’t want to merely wrap a burger, roast or steak with it. 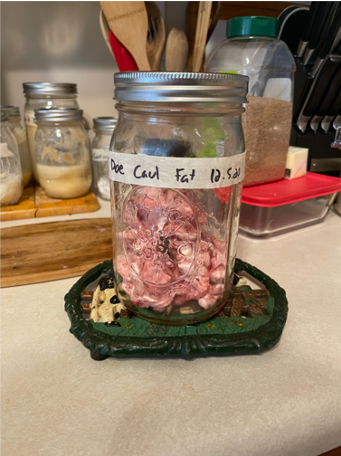 I tried a couple of different preparations with my caul fat, one of which I highly recommend:

-Fry some caul fat up and eat it on toast with honey. I was inspired to do this hearing about how folks used to eat bear grease spread on bread. The fried caul fat only on bread does not quite do it, but the addition of honey makes this a great treat. I like to smash the piece of fried caul fat then put on the honey.

The big thing though, is what most people would avoid doing, since deer fat is considered off-putting (I have my own perspective on that, which I’ll save for now). I’m telling you, render your caul fat!

First, I take kitchen scissors and cut pieces of caul fat into tiny bits. Then, I spread this on the bottom of a small cast iron pan, being sure not to cover it entirely. If you put the pan on low heat, you’ll render the oil out of the caul fat in about 30 minutes. The neat thing about this is that if you have any dirt, leaves, etc. on your caul fat, it will get removed when you strain it, leaving you with pure oil. Just strain the grease through a colander or china cap into a mason jar and toss the fried bits. 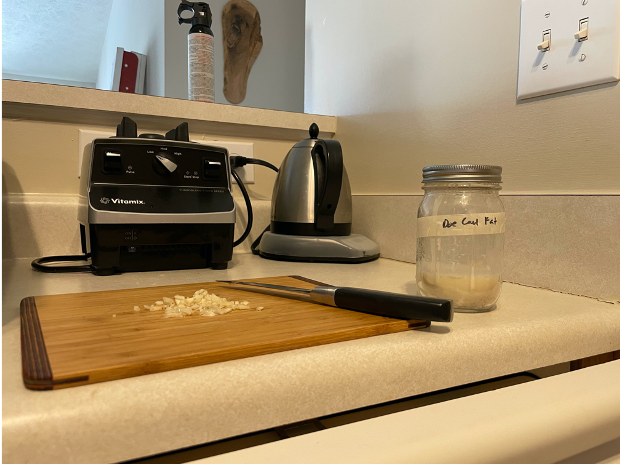 It is particularly well suited to frying eggs—this is now my favorite breakfast! I also have used it to fry backstrap in, and if possible will only fry backstrap in caul fat from now on. Another delicacy is to lightly sauté garlic in it and then fry precooked rice in that.

About Nick Hendricks
share on
See other posts related to Tennessee News
Get the latest news and stories, right to your inbox.
Search
Local Chapters