In April, both the Texas Chapters and New Mexico Chapters of BHA put boots on the ground to improve pronghorn habitat in the beautiful Kiowa and Rita Blanca National Grasslands. NM BHA board member Beau Murphy pioneered this project in 2021 with USFS Wildlife Biologist Kristen Warren in New Mexico and this year Policy Chair Mickey Reves of the Texas Chapter spearheaded the project on the Rita Blanca by Dalhart, Texas. BHA is proud to be working across state lines to improve pronghorn habitat in the Trans-Pecos region.

Although the team faced challenging weather conditions on Friday with dusty skies and wind gusts up to 60 mph, they toughed it out and the project was a success. Saturday and Sunday proved to be much more favorable with less wind and sunny skies. During the weekend, the team was able to raise the bottom wire at 57 locations to 16” for pronghorn passage. And, huge amounts of tumbleweeds were also cleared in those locations. This effectively improved 11.4 miles of fenceline for pronghorn passage and affected approximately 2,467 acres of pronghorn habitat. The team also retrofitted .8 miles of fenceline with smooth wire on wildlife exclosures to improve pronghorn access to water guzzlers. 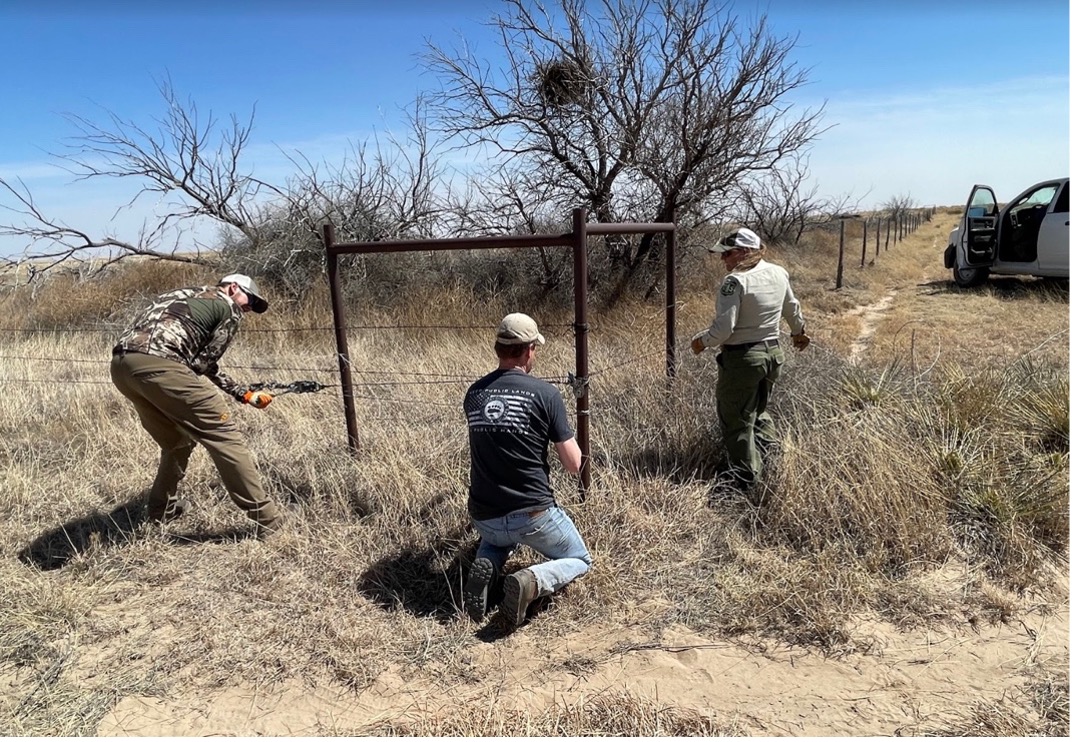 The volunteer crew consisted of four USFS staffers including the Kiowa and Rita Blanca biologist Kristen Warren, who has led project development and execution, plus two other biologists from the Cibola National Forest. District Ranger Mike Atkinson spoke to the group about the history of the grasslands on Friday night and has heartily supported this work form the get go. Texas Parks and Mule Deer and Pronghorn Program Leader Shawn Gray also greatly contributed by sharing his insights into this habitat and pronghorn behavior in the area and how TPWD is proactively working with landowners to make allotment fencing more permeable.

Texas BHA would like to thank all the volunteers and conservation partners that took time out of their busy schedules to make a difference for Rita Blanca pronghorn. Stay tuned for future volunteer opportunities like this and email us at [email protected] to get involved.

As BHA's Western Regional Manager Katie supports Texas, New Mexico, Arizona and Utah and other coordinators across the west. When not working, she's exploring the Southwest with her husband, toddler and black lab, cooking wild game, and shooting her bow.

share on
See other posts related to Texas BHA Texas News stewardship
Get the latest news and stories, right to your inbox.
Search
Local Chapters