On August 10, the Idaho Department of Lands (“IDL”) notified Trident Holdings, LLC that the Trident proposal to exchange just over 20,000 acres of timberland in northern Idaho for a similar amount of acreage of state endowment land around Payette Lake had been rejected.

Idaho BHA has been involved in efforts to develop conservation solutions as alternatives to development on endowment lands around Payette Lake, and background on this work can be found here, as well as in an update post detailing the formation of the United Payette coalition. As a reminder, state endowment lands are distinct from federal public lands and are managed by IDL and the Idaho Land Board who have a constitutional mandate to maximize the long-term value of these lands to endowment beneficiaries. Any conservation solutions developed must enable IDL and the Land Board to meet this obligation.

While the work of United Payette is ongoing, it is important to note that IDL rejected the Trident proposal based on its own internal diligence. It cited five primary reasons for the rejection, the bulk of them economic in nature – IDL referenced an analysis of the land values in question which arrived at a value of $366 million for the endowment lands around Payette Lake, as compared to $74 million for the lands Trident proposed to exchange. IDL also pointed out that land in the McCall area is appreciating at a significantly higher rate than what is seen in north-central Idaho, widening an already substantial discrepancy. There were other considerations as well, but the rejection of the Trident proposal comes as welcome news to many who did not wish to see the habitat value and recreational access we currently enjoy on state endowment lands around Payette Lake given over to development. 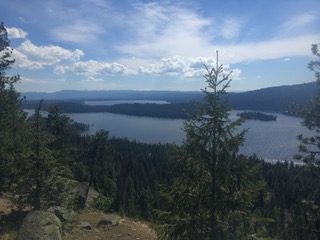 With the Trident proposal no longer looming, it would be easy to say that the threat to our endowment lands is safely in the rear-view mirror. Regrettably, this is not at all the case. Trident may have pushed the issue of endowment lands to the front of everyone’s mind, but they are by no means the last organization that will attempt to pursue large-scale development on some portion of the 2.5 million acres of endowment land here in Idaho. In order to be prepared for this eventuality, and to effectively conserve priority landscapes, it is vital that we continue working on conservation solutions that will serve as effective alternatives to development.

The strategy of United Payette has not changed. The coalition still intends to present its plan to the Idaho Land Board in September, and the results of this process may well have implications for upholding the conservation and recreation value of endowment lands throughout the state. The decision by IDL to reject the Trident proposal is good news, but the challenge now is to maintain our sense of urgency. Idaho’s endowment lands are now in the spotlight. That is unlikely to change anytime soon.