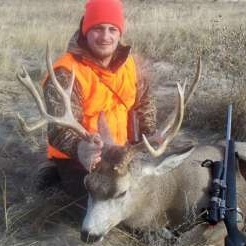 Trevor Herrman grew up on a dairy farm in Northwestern Wisconsin.  It was a beautiful area, surrounded by lakes, trout streams, and abundant amounts of wildlife to chase in the woods.  Trevor has always been drawn to the Western states and dreamed of spending time in the mountains of Wyoming. In the Summer of 2012, Trevor took a job in the Cheyenne area and his dreams of living and hunting the West came true.

While living in Wisconsin, Trevor was involved as a mentor in youth hunts through the NWTF and was involved in various conservation projects.  Upon moving to Wyoming, Trevor learned about BHA and immediately became drawn to the organization and its boots on the ground projects.  Trevor finds a great deal of satisfaction in getting to see projects through from an idea to completion and knowing that he is helping to make a difference.  In his spare time, Trevor enjoys spending time with his wife and young kids and taking them hiking and fishing in the mountains of Wyoming.