Tranquility in the Ozarks 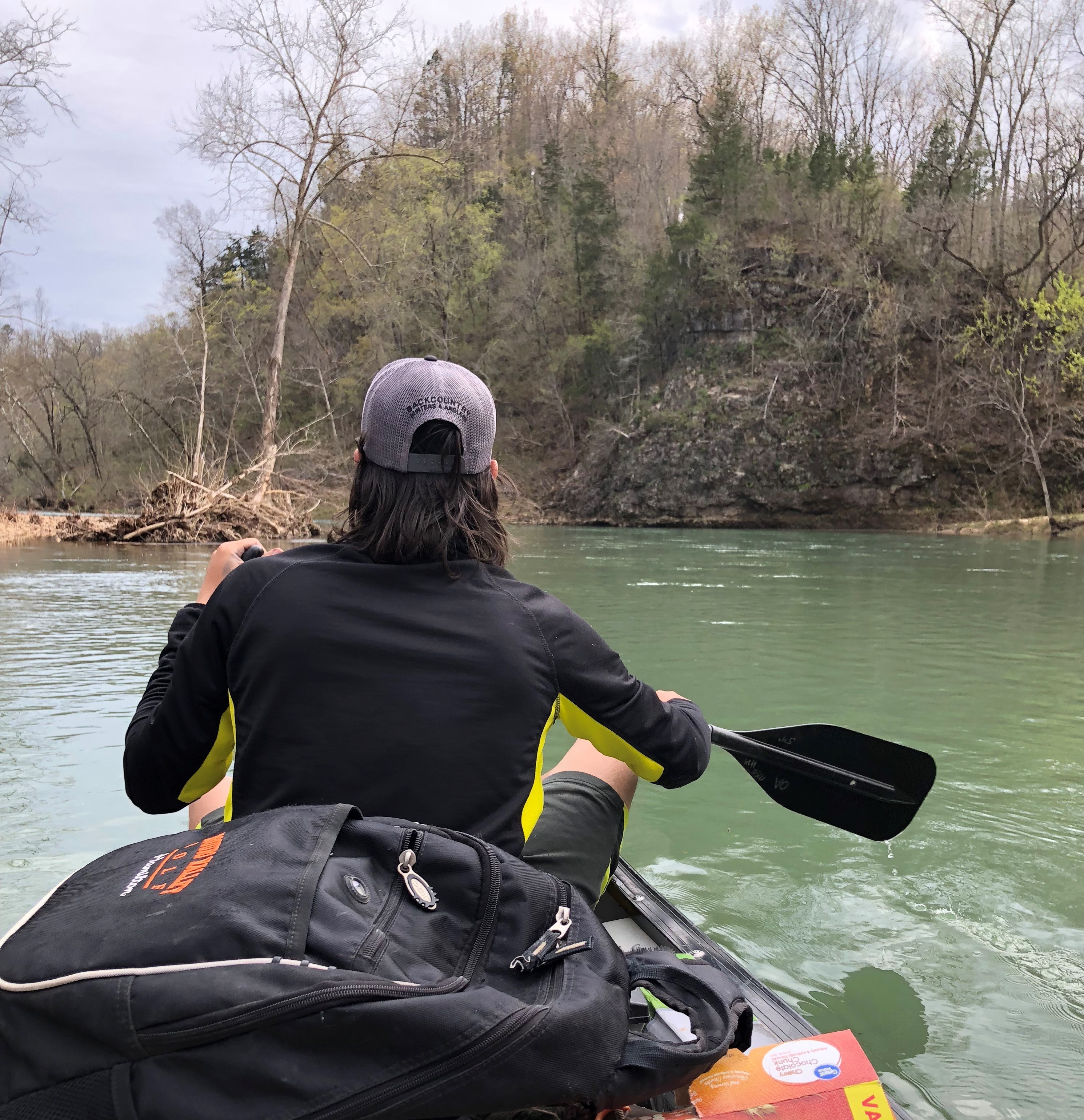 The crisp turquoise spring water ripples across the front of my canoe, with the gentle strokes of my paddle and the soothing melody of stirring songbirds the only sounds as I traverse downstream. Steam is coming from the water like a fire that has almost burned itself out, while the sunlight pierces through the sycamores, providing me a clearer path through the rapids and root wads. The river bluffs rise high above on either side almost as if to point my eyes to the heavens. The cliffs, though not long-lived, are magnificent, and I take maybe a moment too long enjoying the serenity of my view. I am trapped in the moment, almost unable to continue, until a distant gobble yanks me back to reality.

The Eleven Point River stretches over 40 miles in Missouri and is part of the Ozark National Scenic Riverways, which also includes the Current and Jacks Fork rivers. This paradise of public land, which consists of classic karst topography with limestone cliffs, deciduous forest and caves – over 175 miles of river in south-central Missouri – is all protected by the ONSR. Although managed by the National Park Service, this area is open to hunting and fishing. Additionally, the rolling hills of the Ozarks provide stunning vistas, fall foliage, rafting, camping and are home to some of the largest freshwater springs in the United States. That’s all why I chose to hunt here. It’s hard, it’s fair and it’s isolated.

With my canoe parked safely above the rapids, I first grab my fishing rod and casually toss a Rebel shallow diving crawdad. I do this a few times trying to entice a local rainbow trout to become dinner. Unsuccessful in my attempts, I strap on my turkey vest, grab my grandfather’s single-shot 12 gauge from the canoe and attempt to cross the creek that appeared to be an easy obstacle on my map. This proves to be much more difficult than anticipated; it’s a half mile hike before I can even attempt to cross the nebulous water. I start the climb up the bank and crawl into hills of the Irish Wilderness. The cliffs make climbing up from the river difficult, but curiosity and excitement drive me farther into Missouri’s largest wilderness area. After a few hours of calling, I am reminded that no matter how hard I try, I will never be as good as the real thing.

On the hike down off the ridge, the skies open up. With over a two-mile float to the car, not everyone would have a smile on their face.

A long hike down a ravine, a five-mile float and a few casts later, a rainbow trout finds a cozy home over the brilliant glow of the fire. A consequence of my urban residence for the past four years, I have to be reminded of how the starlight can focus my thoughts on reflection. A lonely whippoorwill assures me that I am not alone in basking under the pale moonlight. 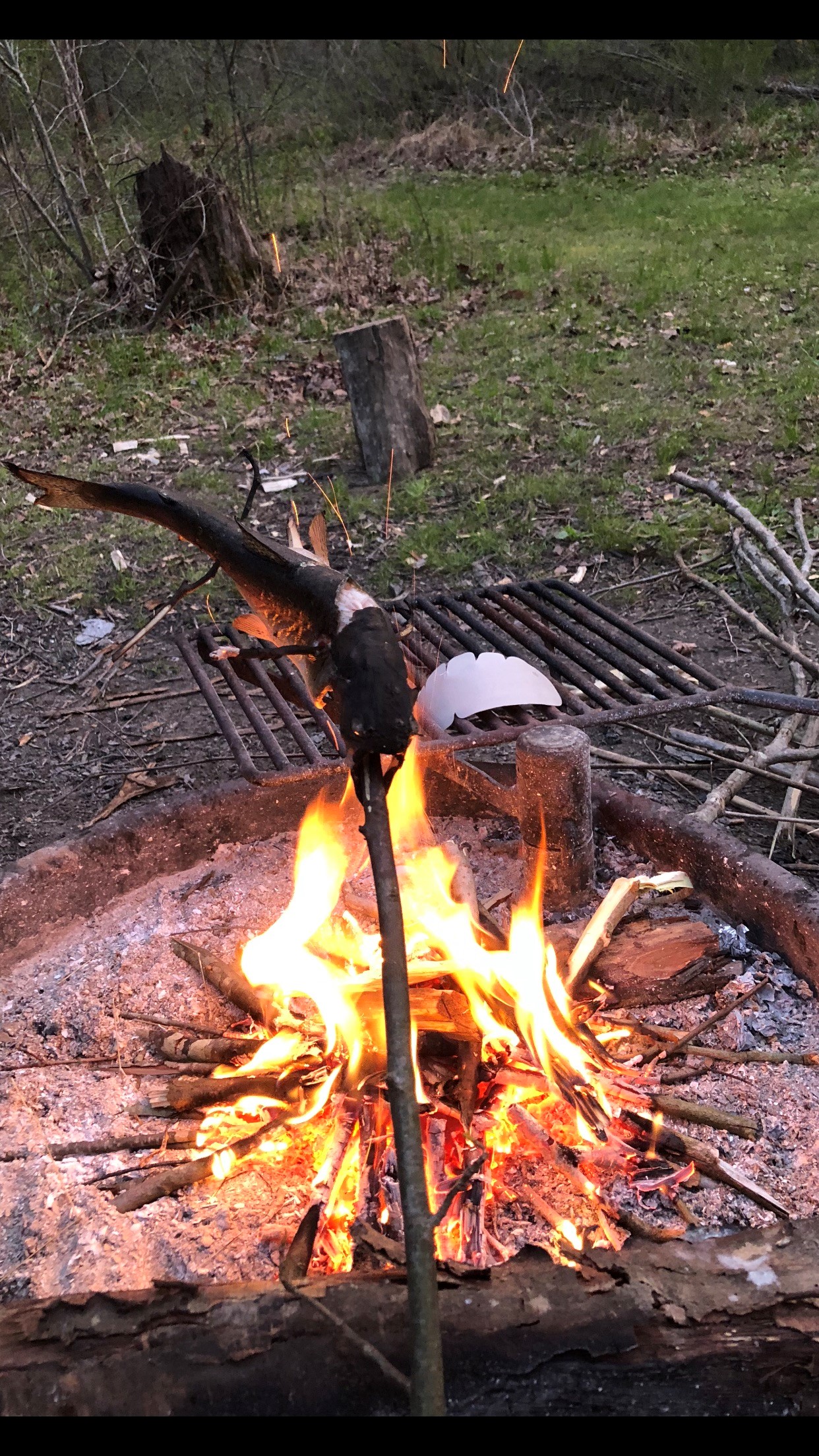 I’m not an early riser. After a 4:45 alarm was silenced by deafening rain, I go after the infamous 10 o’clock gobble. With heavy rains in the forecast and unknowingly floating past my designated camp the afternoon before, I could be in for adventure. Yet another trek into the hills leaves me with a few minutes of excitement – a tom decides to mimic the storm and let loose a thunderous roar from underneath me – and yet still an empty stomach. I am again humbled by the instincts of such a wary bird, the wily Ozark tom deciding he wants to see tomorrow’s sunrise more than he wants to come looking for love.

On the hike down off the ridge, the skies open up. With over a two-mile float to the car, not everyone would have a smile on their face. As my clothes gain water weight, and I find myself taking on the job of human bilge pump, scooping water from my canoe with a water bottle I cut in half, a wave of happiness overcomes me.

BHA member Garrett Titus grew up in the heart of Missouri but now follows his outdoor passions in western Montana.

This article first appeared in the Spring 2020 issue of Backcountry Journal. Join BHA to get 4 issues a year right in your mailbox.

About Garrett Titus
share on
See other posts related to the campfire backcountry journal Missouri BHA
Get the latest news and stories, right to your inbox.
Search
Local Chapters