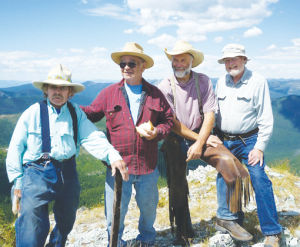 What a great trip. Regular readers of this column will no doubt remember Frank Vitale and I debating the wilderness issue in this newspaper late last summer. That debate ended with Frank challenging me to go with him on his mules to Thompson-Seton Peak, where we would sit down and debate the issue on the mountain top. After getting Frank to agree to not only take me into the mountains but also bring me out, I accepted the challenge.

Unfortunately, the weather turned wet and cold, and we had to postpone the trip until the summer. During the winter, we were both involved in the Whitefish Range Partnership, and over the course of the meetings, we both became fully aware of the other’s feelings and concerns about wilderness. Thus, there was no big need for a mountain-top debate, but I was still anxious to take the trip and was more than happy that Frank, too, was still willing to take me.

July 28 was set as a mutually acceptable date, and I was so excited I started putting my gear together a week ahead of time. Saddlebags and boots were saddle soaped and partially packed — map, compass, slicker, pocket flask, firestarter were all packed. Early on the morning of the ride, I filled the flask with top grade single malt scotch, packed enough venison jerky to share, along with a good high-energy lunch and a plastic 2-quart container of ice. Only disappointment was my pair of cowboy boots. Could not get them soft enough to risk wearing them — wore tennis shoes instead. At the last minute, I also packed my .357 magnum Smith & Wesson revolver.

We met at the end of Whale Creek Road, and I was the first arrival by 30 minutes. Learned later that North Fork Landowners Association president Debo Powers, Montana Wilderness Association representative Amy Robinson, and Dave Hadden from Headwaters Montana were actually at the site earlier, but had to return to Debo’s place because she had forgotten her hiking boots and the three of them were going to do the trip on foot.

Soon Frank and his assistant Ted, Dale Duff with former Montana Secretary of State Bob Brown, and Rich Marriott arrived with their mules. Shortly thereafter, we were on our way, the three hikers leading with six mounted mule riders and three pack mules behind.

What a tremendous three-hour ride. Magnificent forest, a fantastic wild stream and wide views in all directions as we neared the top. At the old lookout site, you could see Mt. Saint Nicholas at the south end of Glacier National Park and see miles into British Columbia to the north. I told Debo if she stood on the rusty bunk on her tiptoes, she could see west clear to Idaho.

We spent a leisurely lunch hour at the lookout before heading down, and I was home by 6 p.m. If I had a bucket list, this ride would have been on it. Terrific country, great company and beautiful weather. I was mentally prepared for rubbed off skin and sore muscles as the price of this great day, but only had slightly sore thighs the next day.

Many, many thanks to Frank for the experience, and to Bill Walker and Frank for the work they did in clearing the trail and getting old guys like Bob Brown, John Frederick and I in and safely out. At 76, I did not expect to ever get into the backcountry again. Now I’m dreaming about an overnighter. Thanks, Frank.