The Western Paradox: A Conservation Reader by Bernard DeVoto 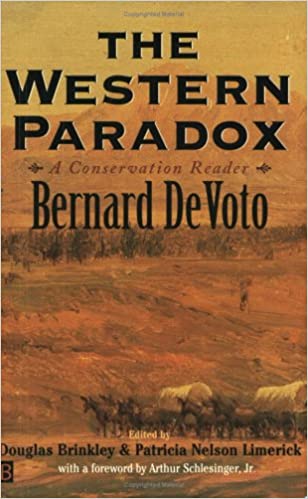 Bernard DeVoto spent the greater part of his career, from the mid-1930s to the mid-1950s, writing essays and articles about the West. During that first decade, most of his fierce writings defended the West and its resident Westerners from the greed of Eastern profiteers. In the second decade, however, his pen turned against the Westerners, as he became convinced that they were their own worst enemies when it came to exploitation and delusion.

The articles and essays in The Western Paradox may have been mostly written in the middle of the last century, but there is a reason the collection was published in 2001: the prominent issues of water scarcity, the myth of the cowboy, the importance of our public lands, how we define nature, the fight between conserving natural resources and exploiting them, and the question of who should profit from the West’s riches are issues that have never been properly settled.

The age of the writing provides us with yet another benefit: distance. Reading The Western Paradox now, while living in a country struggling to find common ground in the midst of partisan divides, gives us the breathing space we need in order to listen to arguments we might not otherwise consider. DeVoto pulls no punches, however, and every one of the West’s sacred cows is stripped to its bare bones and examined. He aimed “to put something on the record that will not easily be dislodged” and, regardless of your position on the issues he discusses, you cannot deny that he has done exactly that.

At 466 pages, with another 60 pages of notes, The Western Paradox is not a quick read; the technical, historical and emotional content of its pages make it even less so. But it nevertheless should be required reading for anyone who loves the West, lives in the West or wants to understand the history of the West.

Purchase The Western Paradox: A Conservation Reader by Bernard DeVotoGrinnell: America’s Environmental Pioneer and His Restless Drive to Save the West on Amazon Smile, and register Backcountry Hunters & Anglers as your preferred non-profit to give back to your wild public lands, waters and wildlife.