On Sept. 23, 2016, Rep. Peter DeFazio of Oregon announced the introduction of H.R. 6129, a House companion bill to Sens. Ron Wyden’s and Jeff Merkley’s Frank Moore Wild Steelhead Sanctuary Designation Act (S. 1448). DeFazio’s bill, which would permanently protect this storied steelhead spawning ground and riparian habitat – and ensure that future generations of sportsmen can enjoy the area’s legendary fishing and hunting opportunities – is strongly supported by Backcountry Hunters & Anglers, which is working with sportsmen partners to advance both the House and Senate measures.

With the Wyden-Merkley bill advanced out of committee in the Senate, BHA is urging the House Committee on Natural Resources to prioritize scheduling a hearing on DeFazio’s legislation. With the continued efforts of BHA and others, this legislation could make its way to the president’s desk before the end of the year...

NINETY-THREE-YEAR-OLD Frank Moore has lived on Oregon’s North Umpqua River most of his life. He inspired the 1968 film “Pass Creek,” which led to logging changes nationwide to protect riparian habitat. Frank has been honored with awards like the National Wildlife Federation’s “Conservationist of the Year” and served as a commissioner for the Oregon Department of Fish and Wildlife. He is a great friend of Backcountry Hunters & Anglers.

Frank was also among the first to land and survive on Utah Beach during the D-Day Invasion of Normandy in 1944. He fought for our freedoms, including the freedom to fish and hunt on public lands. BHA now has a chance to not only to live up to our mission of protecting wildlife and habitat for future generations but also to venerate a hero of both WWII and native fish conservation.

The North Umpqua originates high in the Cascade Mountains near Crater Lake National Park and travels westward into the rich farmland of Western Oregon where, 150 miles later, it joins the Pacific Ocean at Reedsport. Its clear green waters, rife with vegetation and ledge rock, have been revered dating back to the days legendary writer Zane Grey spent there.
The North Umpqua tributaries are critical spawning grounds for native steelhead and salmon. Steamboat Creek, perhaps the most productive artery in the system, contains the Big Bend Pool where hundreds of summer-run steelhead hold, waiting for the fall rains. Lee Spencer has sat on his bench above the pool for the last 18 summers, studying the fish and guarding them from poachers. 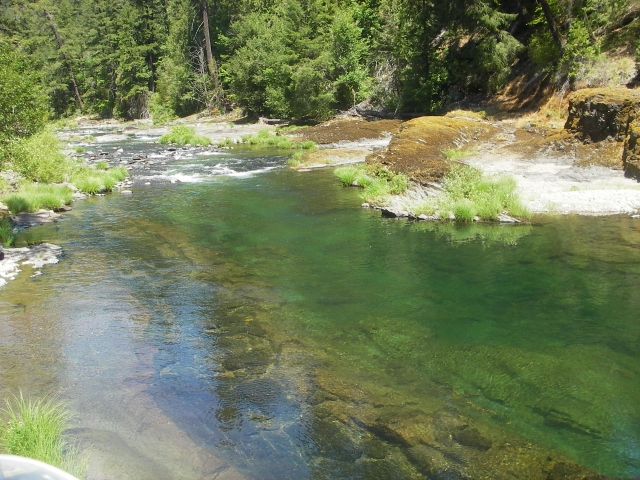 In May 2015, Sens. Wyden and Merkley, both of Oregon, introduced S.B. 1448 to designate 104,000 acres of the Steamboat Creek Basin for the permanent protection of native salmon and steelhead. The Oregon Chapter of Backcountry Hunters & Anglers is actively engaged in seeing this legislation passed. The bill is named the “Frank Moore Wild Steelhead Sanctuary Act.”

Frank is a humble man but admits he is honored by the legislation. “It shouldn’t be for me,” Frank said. “It should be for the fish. That’s the main thing. It’s good for the old ego to see that name Frank Moore, but the resource itself is what’s important.”

According to Ed Bowles, fish division administrator of the Oregon Department of Fish and Wildlife, “The proposed sanctuary on the North Umpqua River contains some of the most important and unique steelhead habitat in Western Oregon. The Steamboat Creek watershed contains over 80 miles of prime spawning habitat for summer steelhead, representing about 30 percent of the known spawning habitat for summer steelhead in the coastal planning domain.” The coastal planning domain encompasses most of the Oregon Coast – 265 miles from Seaside on the north coast to Port Orford on the south coast. Most coastal steelhead are winter-run fish, making this basin all the more special.

BHA is honored to participate in preserving this heritage with partners such as the Pacific Rivers Council, the Wild Salmon Center, Trout Unlimited, the Wild Steelhead Coalition and others. We thank them for their work on behalf of this legislation. But above all, we thank Frank Moore for his part in liberating Europe from Nazi dominion and a rich lifetime of native steelhead conservation.

Get involved with BHA's efforts to protect the steamboat here!