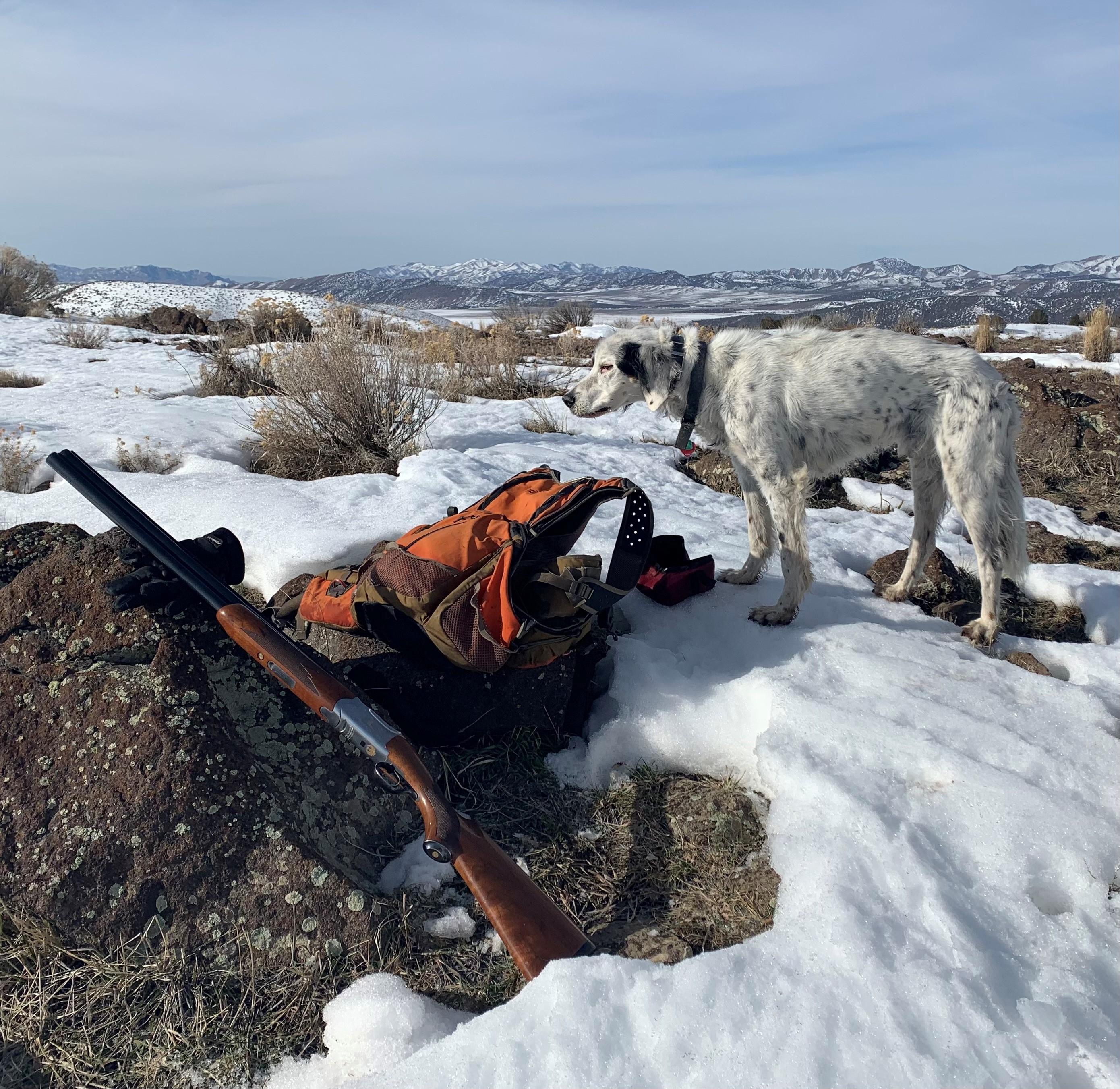 My chukar hunts this past season had become excuses to get some exercise for me and Charlie, my 14-year-old English Setter, spend time in the hills with friends and to explore wild places. The prospects of actually running into birds always provides motivation – but, early on, it became clear that harvesting birds would be secondary to enjoying the balmy winter weather, incredible scenery and the camaraderie of hunting partners. So, with low expectations running at a seasonal high, it caught me off guard when Charlie went on point about 100 yards above me just 30 minutes into on our last hunt of the year – perhaps his last time afield. 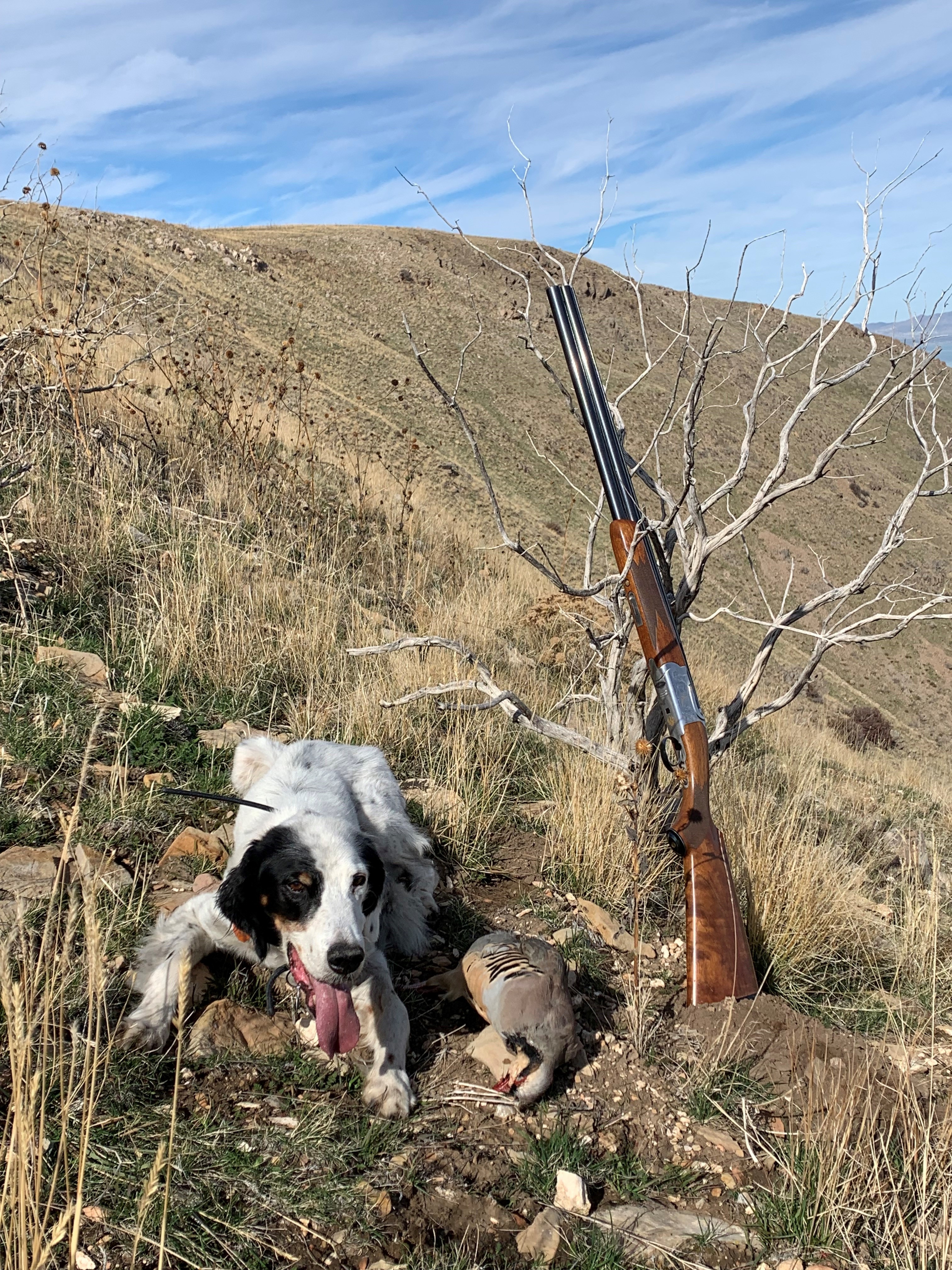 It was the second to the last day of the 2021-22 chukar season, and I decided to squeeze in one last hunt before calling it quits for the year. I had hunted chukars on this mountain numerous times, but never had I seen the grasses grazed so close to the ground – nothing short of a moonscape. Utah’s West Desert ranges had been experiencing drier than normal conditions in 2021. The drought had taken its toll both on bird production and on forage available to livestock. Fortunately, the level of grazing on this school trust land parcel was unusual; most years, sufficient bluebunch wheatgrass stands are left on north-facing slopes to provide excellent cover.

I had debated getting back in the truck and checking out another area, but something told me this series of low hills would provide sufficient cover to hold a covey or two. Afterall, I had gone to the trouble of getting up early and driving the hour and a half to get an early start up the mountain, so I decided to stick with the original plan. My only hunting partner for the day was still in his pet carrier. I gently lifted Charlie out and waited while he lightened his load for the trip up the mountain.

As we began our climb up the mountain that morning, I wondered if this really was to be Charlie’s last adventure; in September he’ll turn 15. Even if he’s still with us, it’s unlikely that he’ll be able to climb into these steep, rocky areas that chukars call home. The combination of 50 mg of carprofen and his strong desire to hunt kept him in the game this past year, but I question if I’m doing him any favors at this point. I lost my GPS tracking receiver earlier in the season and had not replaced it yet, so I was definitely taking a chance with this mostly deaf and nearly blind bird dog and only a training collar to work with. Given my age and the potential for an “unfortunate outcome” of my own, I made good on my commitment to my wife before leaving the truck to drop her a pin after a quick consult with onX.

The wind was whipping in from the south ahead of a late-February storm as I made my way up the slope. Charlie was still on point when I got within shooting range. When you’re hustling up a hillside with the excitement of a covey flush just ahead, you become aware of every breath. It’s during these heart pounding moments, gasping for air, that I think perhaps I need to step up my daily exercise program. Thirty minutes on the elliptical and taking Charlie for short walks around the neighborhood is probably not enough to keep this aging body in chukar hunting shape.

My dad (currently 101 and looking forward to his 102nd birthday this fall) used to tell me that preparing for the annual deer hunt was the only reason he’s lived as long as he has. He jogged long before it was popular and hunted deer until he was 90. Ever since being introduced to Tai Chi on a visit to China in 1989, he has plugged it into his daily morning exercise routine. He figures if it has benefited the elderly in China for over 3,000 years, there must be something to it.

Chukar hunting serves the same motivation for me. No way would I be hiking these hills or working out each day without the prospect of crossing paths with what I consider to be one of the more challenging upland game birds.

Nearly aside Charlie now, I was careful to keep him in sight as I negotiated the scree in front of me. Approaching a pointed covey can be the most dangerous part of any chukar hunt. It does us no good to rush up if we end up sprawled on the ground just as the birds take to the air. I looked around and was surprised to see very little cover and a large patch of snow. I found a level spot where, hopefully, I could keep my balance when the birds took off. They were in there somewhere, but blend in so well that regardless of the advanced notice, they always take us by surprise. I studied Charlie for a quick moment and saw no change in his response to the scent now filling his nasal cavity.

My dad (currently 101 and looking forward to his 102nd birthday this fall) used to tell me that preparing for the annual deer hunt was the only reason he’s lived as long as he has. He jogged long before it was popular and hunted deer until he was 90.

The covey was very close, not moving out as they so often do this late in the season. Never one to show great form, he nevertheless held tight and was waiting with me for the explosion we both knew was coming once the birds finally ran out of patience. And in that very instant, a single bird launched from somewhere near that patch of white and muscle memory took over. You never remember pushing off the safety and raising the gun to your shoulder; it’s all just automatic. What wasn’t automatic this time was seeing the bird continue flying after the first shot and not shooting a second.

The bird was moving in at least two dimensions, out and down and I probably accounted more for the “out” than the “down,” with my shot going over the bird. When I miss a chukar, which tend to drop down quickly from a steep slope, that’s usually the reason. But occasionally, I shoot too soon before the pattern from the first barrel’s improved cylinder has a chance to form. Of course, none of these thoughts went through my mind except to save the second shot for the rest of the covey. How many times have I shot both barrels of my old Ruger Red Label only to miss that second long shot and watch the easiest shot get up and fly away unharmed? I know it’s more than I care to admit.

This time my plan backfired. I stood there, covering the snowy area with that one reserved shot, only to be disappointed. The disappointment shifted though when in an attempt to rationalize my poor performance, I decided it was best that I didn’t shoot the last chukar on the mountain.

After the flush, Charlie continued up the finger ridge and went out of sight when he reached the top. I was in no hurry to catch up with him as I was still recovering from my attempt to get within shooting range of that lucky single. I soon realized my mistake. He must have pointed the rest of the covey on top as several birds flushed and crossed in front of me, just out of range. If this was his last hunt, he was determined to go out in style; at least he was having a good time, I mused. It never ceases to amaze me the willingness bird dogs have to push their limits in pursuit of birds. However, at this point of the day, I could tell that he was beginning to struggle and that it would soon be time to head off the mountain.

We proceeded along the top for another mile or two. Just when I thought it was time to turn back to the truck, he got birdie in an open grassy area where we’ve encountered birds in the past. One second he was in front of me and the next he was nowhere to be seen. A half hour passed without any sign of him. Of all of Charlie’s challenges, in his 15th year, getting disoriented ranks right up there with hearing loss, blurred vision and stiff, shaky legs. Disorientation wasn’t a problem earlier in the season when he and I were equipped with modern technology; but on this day, he was off the grid. After crisscrossing terrain for half an hour I finally saw him top out on the ridge above me and I was able to retrieve him. Frustrated more with myself than with him for not doing enough to protect him, we dropped over the rim and headed toward the blue speck in the distance that would ferry us home.

As is usually the case with chukar hunting, this hunt had its highs and lows. At some point along the way, I tripped on a rock and instantly found myself flat on the ground. Even with very little time to brake my fall forward, I managed to save the gun from any harm. This happens as unconsciously as when you raise it on a covey flush. Gun first, body second. For his part, Charlie made his way back to the truck without any more drama. I checked back every now and then to see that he was keeping me in sight. All day, I couldn’t escape that nagging thought that this was very likely our last hunt together. I took plenty of photos, framing him within the incredible vistas and the vast terrain that he had once handled with ease. This time, we were both a little bruised from our day on the mountain, but grateful to get out together one more time. 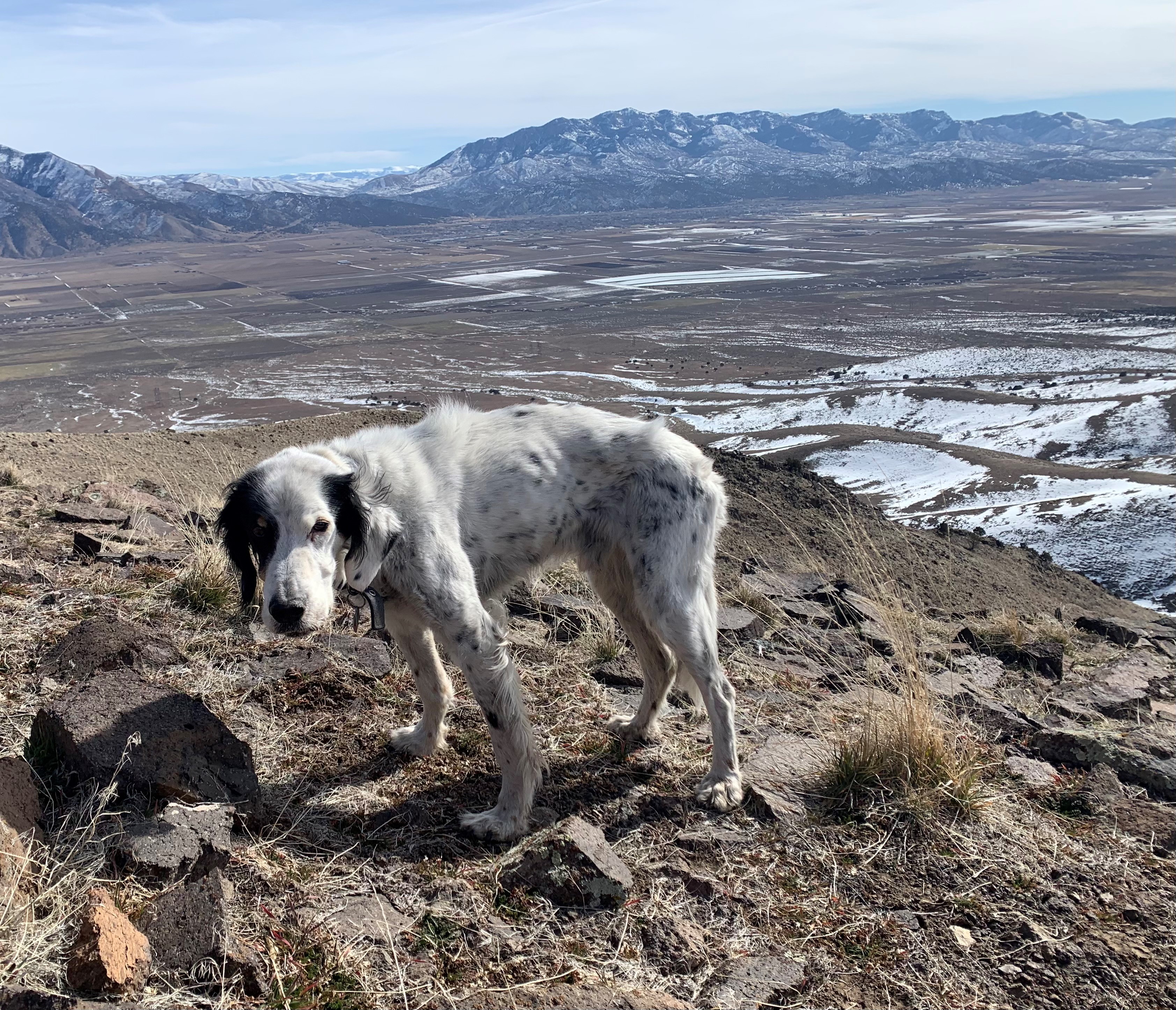 John Fairchild retired in 2016 after a 38-year career with the Utah Division of Wildlife Resources. He currently serves as the Access and Policy Coordinator for BHA's Utah chapter.