The Connection Between Man & Animal 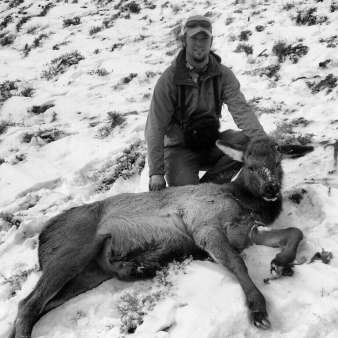 The young cow lay quietly breathing her last as the temperature dropped in the cold December evening air. Minutes before I had made the decision to end her life to provide food for my family. I struggled to celebrate, or to jump up and down yelling because life was ending. With labored effort from broken lungs she exhaled her final breath.

Immediately after the shot my hunting partner had gone back up the hill to call home and let family know that we would be bringing back meat for the coming winter and spring.  This was the second elk of the season and the second time in one fall that my actions had brought death to this beautiful species. Being alone with the animal made the experience even more special than the first.

The first was a funny looking middle age bull that carried a large club formation for a second point on his right antler rather than the usual sweeping brow tine. His other side was a normal five point, but it was the strange antler that enticed me to pull the trigger. My partner on that trip lived out the entire kill with me, down to the final shot that finished him off. It was easier to be excited with that kill because there was no breath left in the lungs of the bull when we got to him. The young cow's life had ended with only the two of us present, and shortly after I was by myself.

Honestly, in my heart, I wasn't excited that I had killed, or thrilled to take an animal's life like we see on so many hunting television shows today. A part of me is embarrassed by some of the behavior that hunters use when in the spotlight. In fact, I am embarrassed to say that once I even jumped up and down, shouting like an idiot when I killed a young bull a few seasons back. There was no one there to celebrate with me, and I quickly realized how foolish the victory dance was.

I don't want this point to be taken as a "don't celebrate the kill" idea. A hunter shouldn't celebrate the fact that we have taken an animal, but celebrate the adventure, the life of the animal, the blessing of food for months to come, and finally the quality of the animal itself.  When the hunt is over, and the meat is cooling, these are the things to reflect on.

This also isn't to minimize the heightened emotion that comes with the pursuit of big game.  Adrenaline kicks in and the thrill of accomplishment can make those moments some of the best we will ever experience. Many hunters have had the "hand shakes" after the kill, and why shouldn't we? Encountering any wild animal is a rush, and many times we label a missed shot "buck/bull fever." All of these things are a natural part of hunting and forever will be.

However, even in the midst of the excitement, adrenaline and all of the other emotions, respect for the animal should play a major role in how and what we are celebrating. We don't celebrate the passing of a loved one, or the death of almost any human. For the death of a loved one it is often the start of a long grieving process. On a vastly smaller scale grief is a part of the kill. The grief often starts as soon as we see the animal drop in the scope, and usually has subsided by the time pictures start. Sometimes there are hints of grief in the "hero" shots taken at the kill site.

I have met very few hunters who don't grieve a little over the kill, in fact I might have a hard time hunting with someone who doesn't at minimum recognize the God given value of the creature.  The grief is often mixed with a sense of accomplishment and pride in the pursuit, love of the activity itself, and the skill set needed to be successful. Some even cry at the moment of the kill, though I have never been one to lay that emotion out for an animal.

Perhaps the grief is one of the reasons that young children are perplexed, in awe and scared of a dead game animal. The first big game kill that I experienced was a fawn that  Dad shot during September rifle season. As an elementary school child who had never been around anything dead it was a mix of emotions. My pride wanted me to be macho, but my churning stomach said otherwise as Dad and his partner started to field dress her. I had to turn around and wait for it to be over.

That year would also teach me the work ethic needed to take a big game animal home.  Many weekends were spent in the mountains of Wyoming pursuing mule deer and elk. Dad checked me out of school on more than one occasion so I could be a part of the experience, to enjoy God's creation while hunting. Soon I started to realize that the kill itself was not all that hunting, or the pursuit of big game would be about.

A successful hunt was not defined by the kill. It was not defined by whether or not an animal's blood was spilled on any one particular outing that fall. Success was defined by our connection to the animal, as big or as small the relationship we had developed with them.  I began to realize that God made them for us to enjoy, to understand, and above all else manage for their well being in a changing world.

Those were lean years when it came to elk hunting, and even a short glimpse of one would have made the trip worth it in my mind. Because of the lean years my connection to elk grew to the point that I couldn't get enough of them. I had to read about them, I had to understand them. Magazines with rutting bulls on the cover and articles inside fed my desire to be around them. Stories of elk hunters actually taking home a bull drove me to look forward to the hunt every year. Now I make sure that every day off in the fall I can take from work is spent in the mountains with them.

As I have matured, my connections with the animals that I hunt have grown stronger. Some animals I will only meet moments before the kill, and others I will meet many months before on scouting trips into the back country.  My appreciation for what it means to take the life an animal has grown. It now means much more to live off of them for the following year, food is no longer something to take for granted.

Regardless of the amount of time spent watching the animal through binoculars, when it reaches the freezer every package of meat has memories attached that remain vivid.  This morning I pulled an elk roast from the freezer.  As I browned the meat to prepare it for the slow cooker I couldn't help but think about the cow and that cold December evening.  The connection to the animal remains even after it moves from the freezer to the plate.  The connection between man and animal is what hunting is all about.