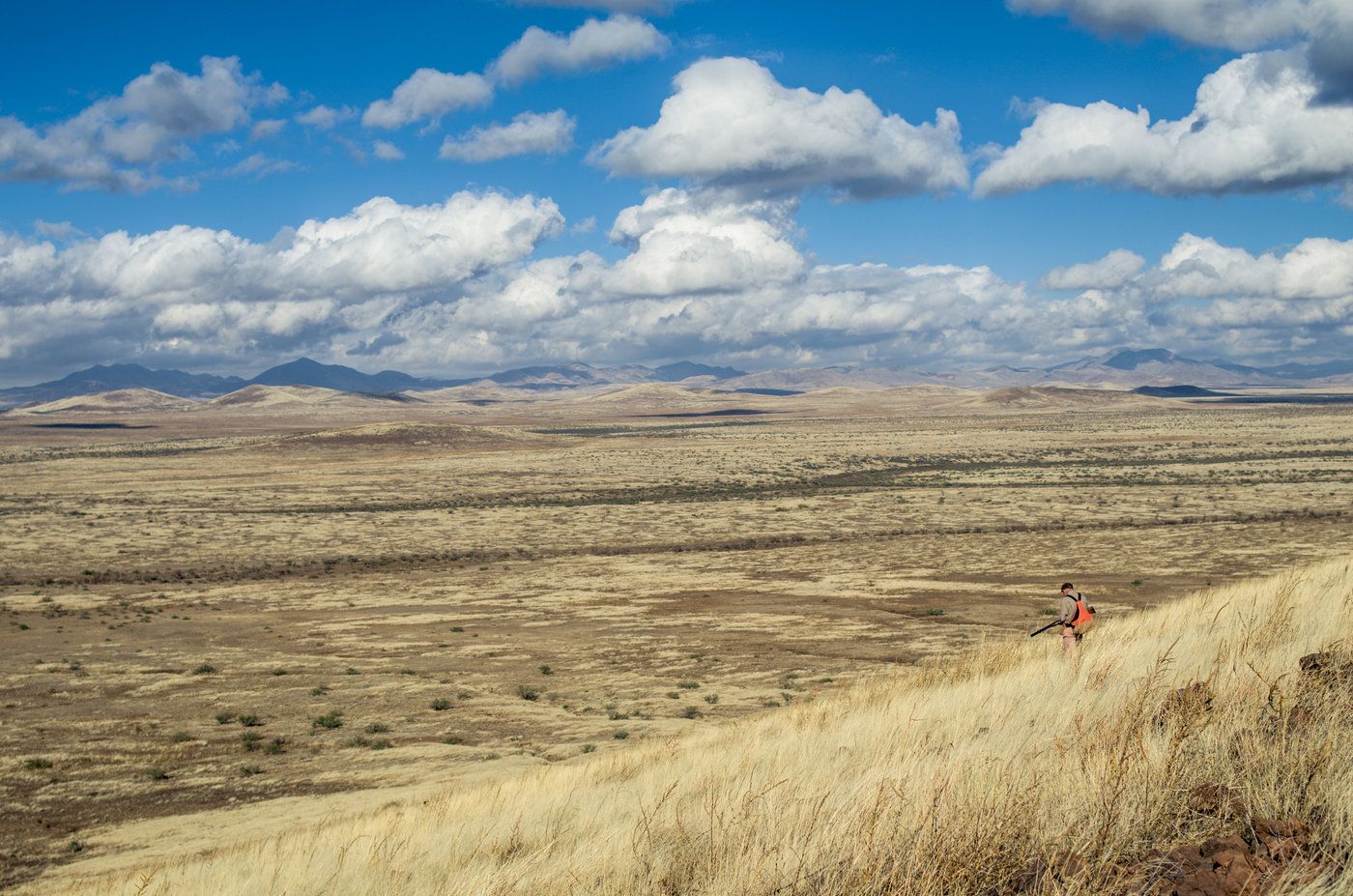 The Best Podcast & Blast Episodes You Might Have Missed This Year

The Best Podcast & Blast Episodes You Might Have Missed This Year

The inestimable Hal Herring's Southern drawl seems to pull the most interesting stories from his guests. Whether they're scientists on the cutting edge of conservation research, ranchers of an iconic North American herbivore or sitting U.S. senators, Hal's got a talent for getting them to open up and be frank about the most important obstacles and victories in the North American outdoors.

BHA's Podcast & Blast is a great way to get keyed in on some of the biggest conservation issues facing us today. As always, thanks to our sponsors at Filson, Mountain Top Motors and goHUNT. Without their support, we couldn't share these important conversations with you.

Without further ado, these are some of 2021's most compelling episodes of BHA's Podcast & Blast. Give them a listen. We hope you enjoy them as much as we do! 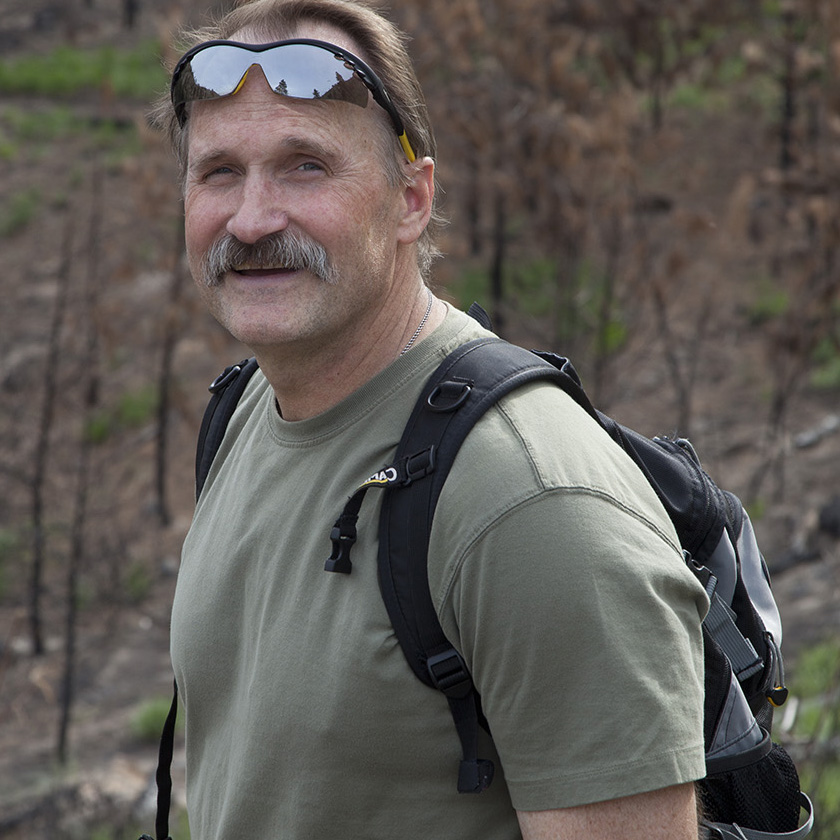 Prominent research ecologist Dr. Paul Hessburg began his career decades ago as a U.S. Forest Service entomologist, studying the insects that kill trees on the grandest scale. Over the years, Hessburg broadened his scope, delving deeper into the greatest force for ecological change on Earth: fire and the age we live now in, the Age of Megafire, or the Pyrocene. Listen to this fascinating deep dive into how we got here and where we must go – if we hope to survive.

To get the absolute most out of this conversation, revisit BHA Podcast & Blast Episode 66, our interview with fire historian Dr. Stephen J. Pyne, who coined the term “the Pyrocene.” 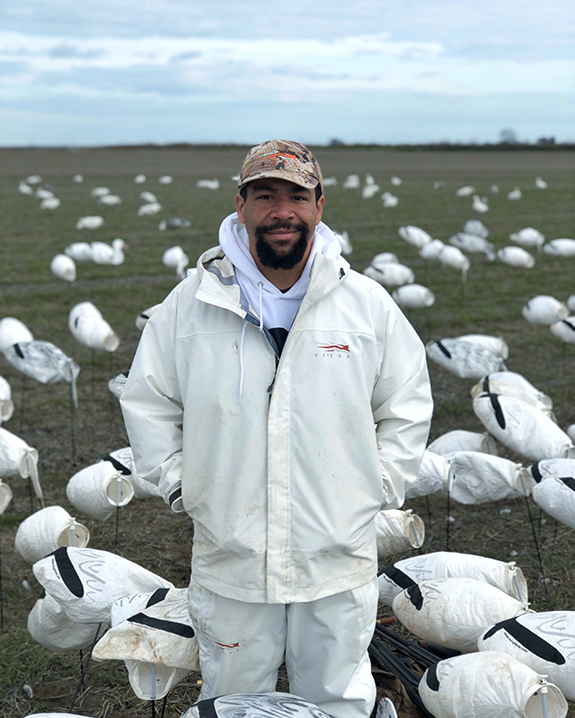 “I never found a place I belong, so I’m making one.” Jonathan Wilkins is the founder of Black Duck Revival, a hunting and fishing guide service and simple lodge – built by his own two hands from an old church building in Brinkley, Arkansas. Jonathan is also a father and husband, a next-level forager and cook, a writer and working man. As he wrote in an essay for Outdoor Life last winter, “I am a Black man. Actually, I am biracial, but I live in a place where that nuance of truth is, most often, not afforded me.” Jonathan’s story, and the story of Black Duck Revival, is an American journey, a reclaiming of heritage, a celebration of family, hunting and fishing in the beautiful and haunted lands of the mighty Arkansas Delta. 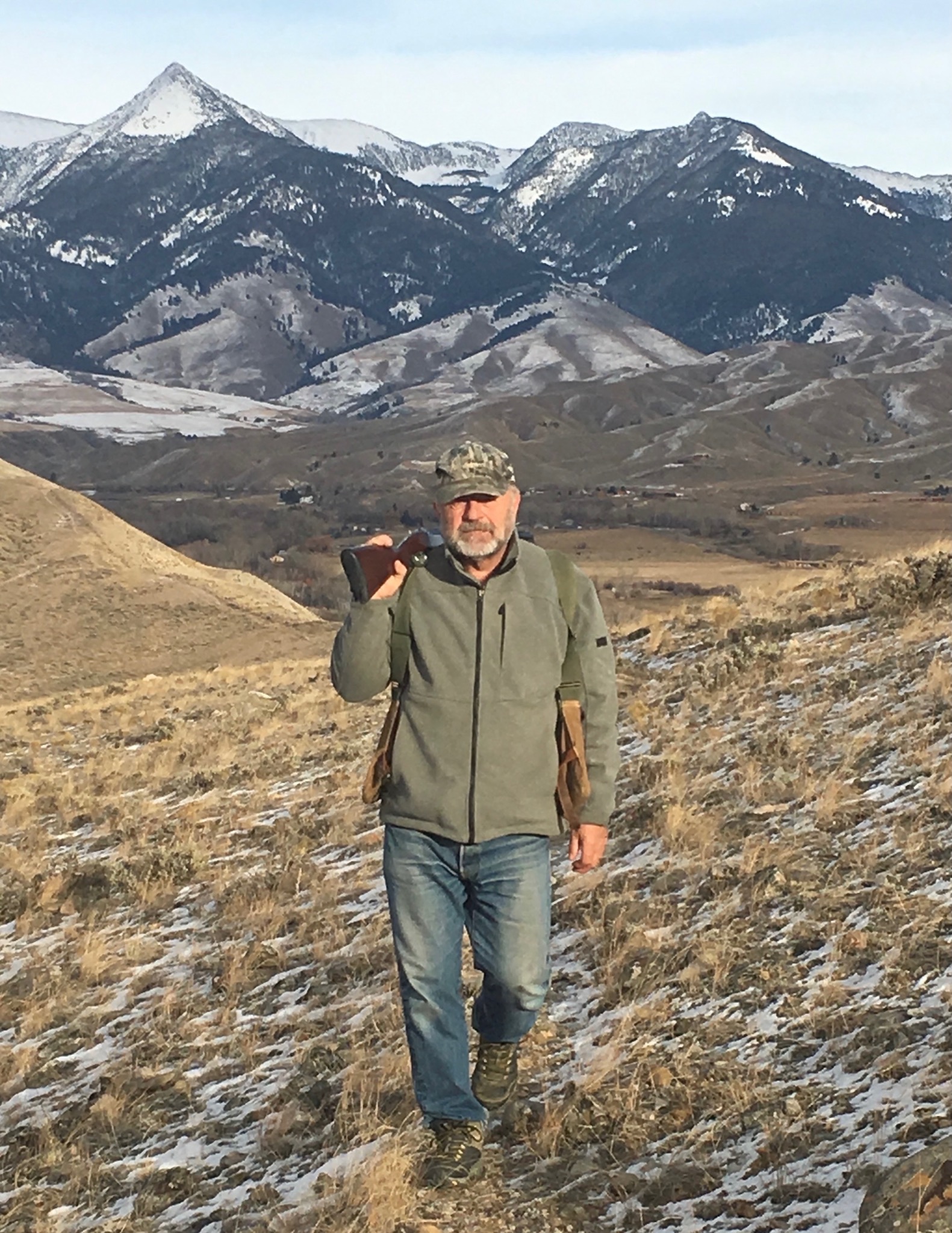 Tony Latham is a retired game warden with 25 years’ experience working undercover on some of Idaho’s wildest public lands and in pursuit of some of the West’s nastiest wildlife criminals. Undercover work is a total immersion in a subculture: of cheap alcohol and casual violence, dive bars and broken people, slaughtered fish and wildlife, and coldly professional violators. The job exacts its own price, and nobody could ever say they do it for the pay. It’s only for the truly committed, those who believe in hunting and fishing and wildlife conservation as basic to the American way of life and who are willing to put their lives on the line to make sure it endures. Join us in Salmon, Idaho, to hear stories from the game warden and lifelong conservationist who risked it all to hold his part of the Thin Green Line. 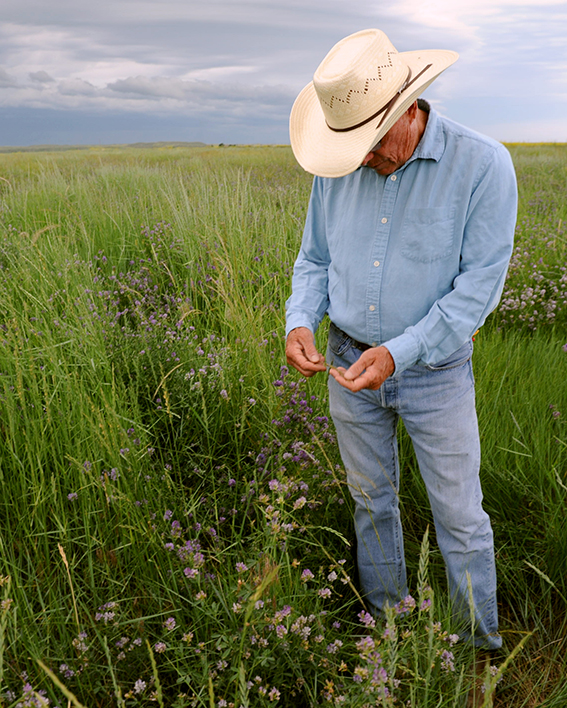 Dan O’Brien ranches buffalo over 26,000 acres of deeded and public lands 30 miles outside of Hermosa, South Dakota. He has been a writer of fiction and nonfiction, a dog trainer and falconer for almost 60 years. Dan is the founder of Wild Idea, a company that brings together the respectful production of some of the world’s best meat with a new vision for our rural economy, along with the restoration, on a grand scale, of mixed-grass prairie and its wildlife, native plants and birds. Join us for an easygoing journey into books, buffalo, falcons and a very strenuous, open-hearted life spent under the mighty blue skies of the Dakotas. Included is a short foray into what it is like to be friends with the late, great Jim Harrison – including having Harrison pull into the yard of the ranch house, stopping by for a few days of misbehavior on his almost endless peregrinations across America. 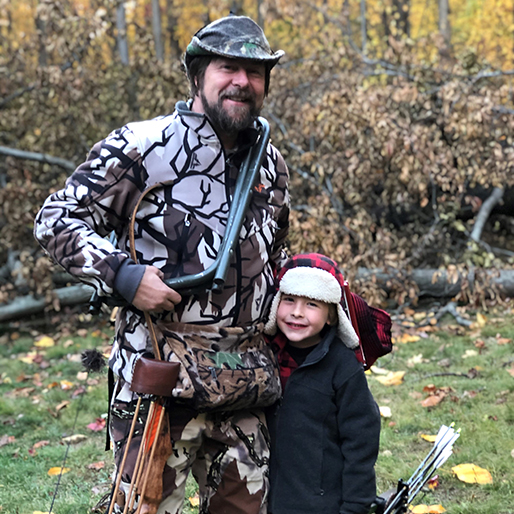 Come join us for a conversation with Ron Rohrbaugh Jr. of western Pennsylvania, wildlife biologist, traditional bowhunter and bowyer, conservationist and writer. We'll talk whitetails, shooting, the journey from rifle to trad bow, deep ecology, the art and craft of bowmaking and the glories of America's northeastern wildlands. Ron is the author of A Traditional Bowhunter's Path: Lessons and Adventures at Full Draw, and the founder of the traditional archery supply company LifeCycle Gear. 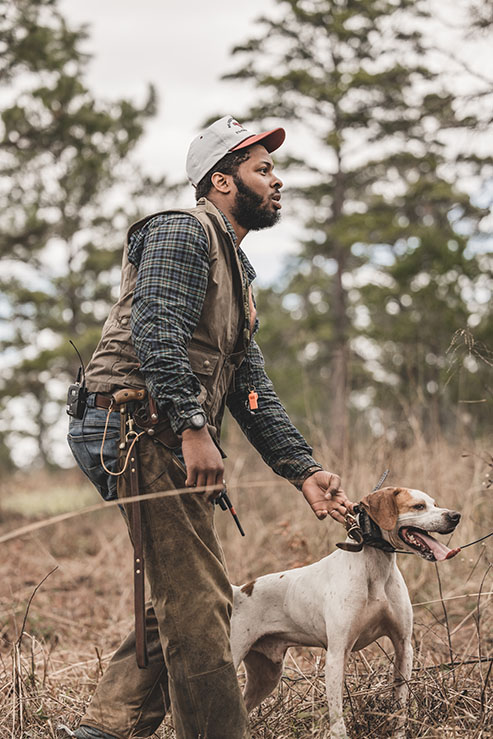 Durrell Smith is a bird dog trainer, artist, podcaster and writer from Georgia. He founded the Minority Outdoor Alliance, a pioneer in connecting minorities to their history and voice in the hunting and angling communities. “He lives what he speaks,” as Hal says of Durrell, who is also a bobwhite quail hunting fanatic, guiding and chasing birds largely on public lands. Through his work and pursuits, he is carrying on an incredible lineage of Southern quail hunting and dog training, giving voice to the deeply enmeshed and influential role of Blacks in Southern outdoor traditions. Listen as Hal and Durrell wander through the South, discuss Southern art and sporting culture, and consider the crucial role of diverse participants in keeping our outdoor heritage healthy and relevant. 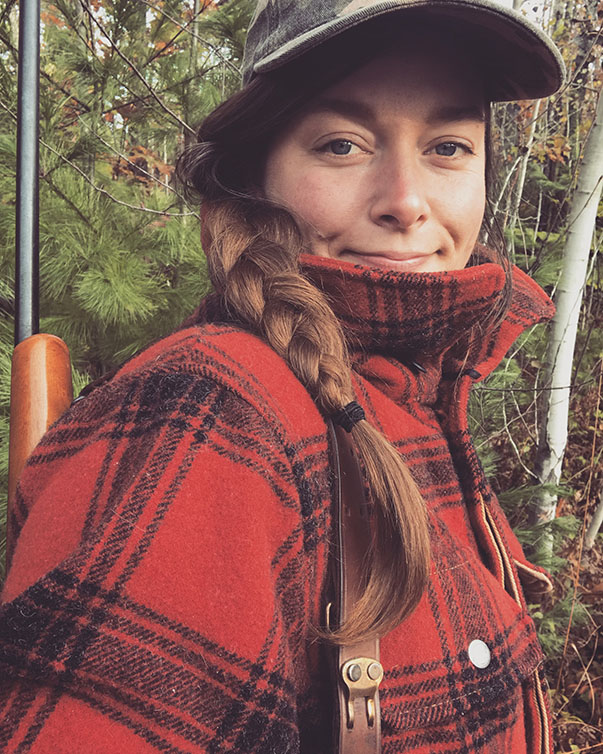 “It started with food, and it’s evolved into what most hunters have experienced…sure, the end goal is food, but there’s a million more things to enjoy about it.” Jenna Rozelle lives in southern Maine, where she teaches classes on wild foods, forages, hunts, fishes and chronicles an existence spent close to the land. For her, hunting and fishing go hand in hand with foraging and land stewardship. A board member of the New England chapter of BHA and self described late-onset hunter, Rozelle tells Hal the story of her long and winding road to a gratifying relationship with harvesting wild creatures. Join them as they talk wild foods and how to find them, the joys and challenges of spring gardening and squirrel hunting as an entry point to hunting. Along the way you’ll hear about an ancient book of herbal lore, the life and habits of a unique fish parasite, and the evolutionary benefits of our keenly developed and very human sense of disgust. 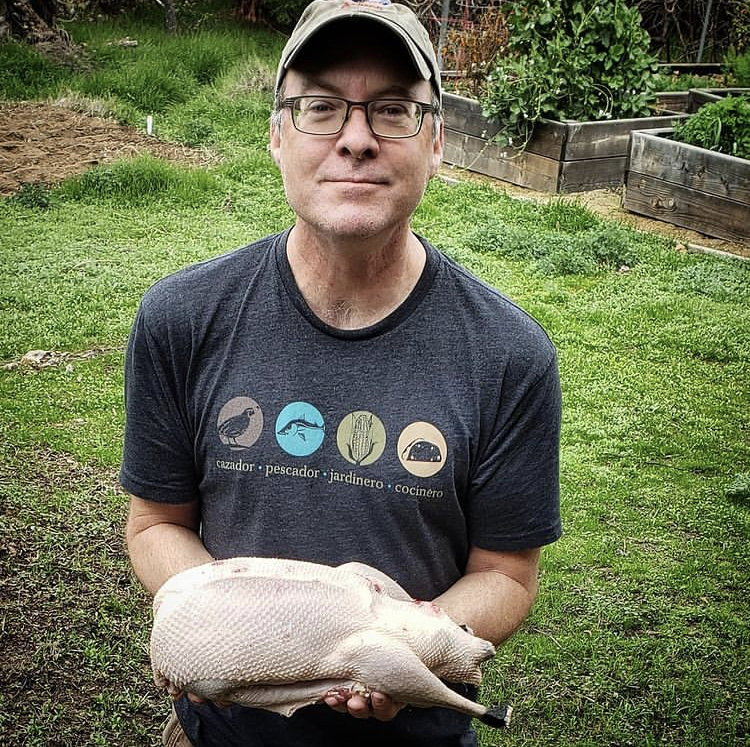 Sit down with Hal and Hank Shaw, the man who transformed wild game cookery in America – and who ushered in an entirely new era of hunting, fishing, gathering and foraging as culinary as well as predatory arts.

Hank, who runs the wild foods website Hunter Angler Gardener Cook, was at the BHA 2021 Rendezvous to cook, see old friends and meet likeminded outdoorsmen and women. He also shared his new book, Hook, Line and Supper, which does for fishing what Duck, Duck, Goose did for waterfowl, Buck, Buck, Moose did for big game, and Rabbit, Quail, Cottontail did for small game.

There has never been a fishing and hunting and foraging chef quite like Hank Shaw. Join us for a conversation, recorded live on a broiling sunblasted outdoor stage at Fort Missoula, that is as much about the journey as it is about the destination. 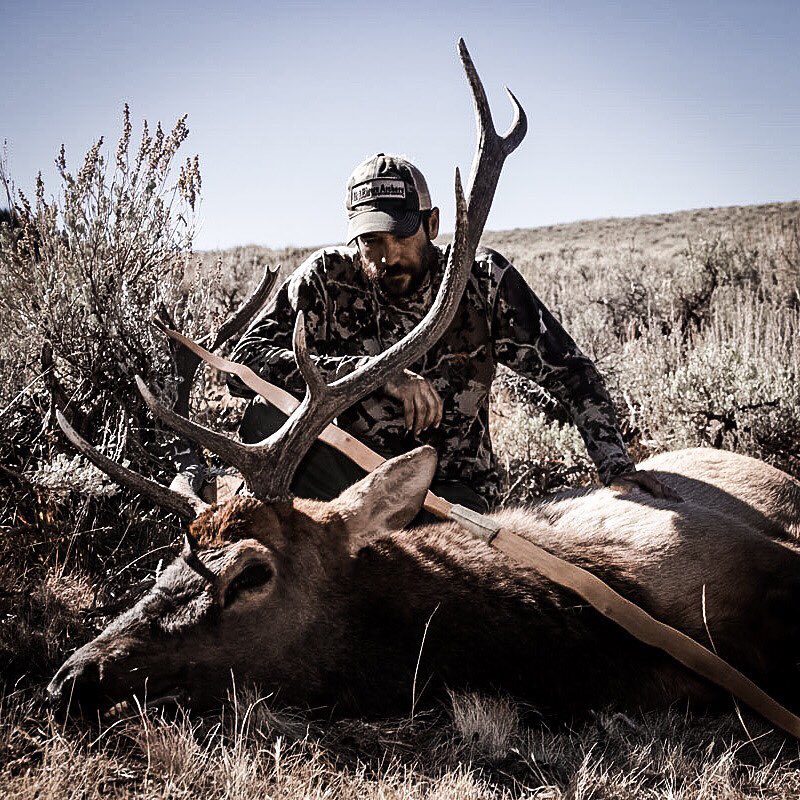 Host of BHA’s Backcountry College YouTube series, Clay Hayes is a traditional bowhunter, wildlife biologist, wilderness skills instructor, master bowyer, filmmaker and family man who splits his time between a homestead in the mountains of Idaho and the piney woods and swamp country of the Florida Panhandle where he was born and raised. Clay is also the winner of Alone Season 8, the reality TV survival series, where he survived for 74 days along the shoreline of Chilko Lake in British Columbia using a small selection of tools, his bow, the teachings of the great Stoic philosophers, and a combination of a little luck and lot of pure will. 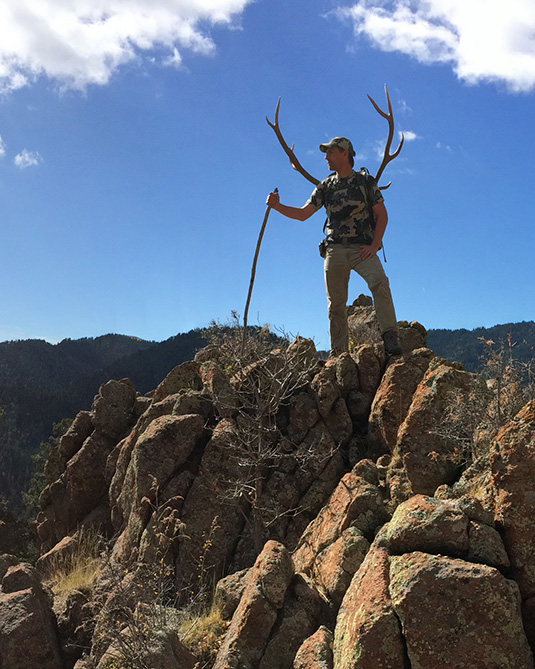 Sen. Martin Heinrich (D-NM), a hunter, angler, longtime conservation champion and BHA member, has introduced legislation known as the Recovering America’s Wildlife Act (S. 2372). This bipartisan bill would dedicate nearly $1.4 billion annually to fund projects by state and tribal fish and wildlife agencies that benefit both game and non-game species. In partnership with a broad coalition of organizations, businesses and fish and wildlife management agencies that make up the Alliance for America’s Fish & Wildlife, BHA is working to advance this legislation, the product of decades of hard work by devoted sportsmen and women, conservationists and business leaders. In this special episode of the Podcast & Blast, Hal talks with Sen. Heinrich about why hunters and anglers have a major stake in the conservation of habitat relied upon by a range of fish and wildlife species. Learn more and take action in support of the Recovering America’s Wildlife Act.

share on
See other posts related to the campfire Podcast