The Art of Elk Antler Collecting 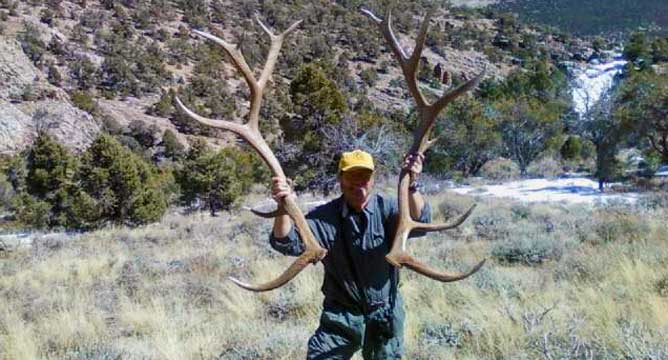 During the past couple of decades my wife and I have found over 1,000 elk antlers. So it was reasonable for me to believe that, over time, we had figured out how to do it. By referring to journal entries, we made educated guesses where to hike and hunt for antlers at different times of the year.

Let the Shed Antlers Speak to You

In Nevada, naturally shed antlers can be legally collected any time. It is both illegal and unethical to harass wildlife, and it’s easy to do accidentally in early spring when elk recover from winter and are more accessible at lower elevations. The U.S. Forest Service and the Bureau of Land Management manage 82 percent of the land in Nevada and 92 percent of the land where we live in White Pine County. These agencies implement seasonal closures on roads and limit vehicle use to designated roads and trails, and they enforce these limitations.

When we first hunted elk antlers it seemed to be an insurmountable task. With so many millions of acres of public land and just a few thousand elk, it was like finding a needle in a haystack. It was thrilling to find any elk antler, no matter how small or how old. As we progressed in this hobby our focus changed to fresh antlers, larger antlers and paired antlers. High-quality binoculars helped our proficiency in maximizing opportunities for success. Some outings were like a giant Easter egg hunt.

We became students of elk behavior. Spring is a time of year for elk to conserve energy and also to refuel from the winter. They do not move about aimlessly in their quest for food, thermal cover, security, water and bedding. We began to look for movement patterns, but their habits change from year to year depending on the weather and responses to human disturbance.

We maximized our luck through scouting wintering elk from a distance. Some of the things we tried:

So it was with dismay that over a couple weeks last summer I hiked 17 hours in “shed antler habitats” without finding an antler. While I knew we needed to make educated guesses and put in field time, I questioned my proficiency in this hobby that started to feel like work. I could console myself with the knowledge that my wife, who hiked nearby, had found six elk sheds, so we must have been doing something right. Besides, I got to have daily picnics in the mountains.

I mentally reviewed important considerations for the enlightened shed elk antler hunter. Was I looking for the whole antler when I should be looking for just a clue? Did I depend on my eyes when I should trust my binoculars? It is easy to miss a sheen that appears unnatural (fresh elk antlers are quite shiny), a speck of white, a horizontal line in the grass, a fork, or curve of a tine when looking at an expanse of country.

Binoculars will not only enlarge an area but force attention on a smaller chunk of ground. During some years, more than 30 percent of all antlers found are first seen through binoculars. One must examine everything suspicious. Ninety percent of the time it will not be an antler, but investigating every square inch of ground will increase your antler haul. Especially check anything suspicious that your mind dismisses as “just too big to be an antler.” That could be the one we are all looking for.

Was I actively looking? This includes going slow enough to allow for careful scanning of surroundings; constantly reminding yourself of clues; stopping to glass; and having your head on a swivel so as to check out angles behind you on either side.

No matter the success during any given day of antler hiking, I always wonder about the ones we didn’t see. To experiment, we would take the largest antler found and place it on the ground in typical habitat. We are surprised how difficult, or even impossible, it is to see the antler from different angles and how close we had to be in order to find it.

After my dry spell last summer I began to pick up more antlers. It would have been easy to get discouraged, but hiking in the backcountry is something we do anyway. The antlers are just a bonus.

Antler collecting is a good way to enjoy the backcountry. If you get lucky, get physical, gather knowledge but keep your secrets, be ethical, and think like an elk – you can be rewarded with a heavier load to carry out than you went in.