3rd Annual Tales from the Backcountry

***LOOKING FOR A TICKET? Online ticket sales ended at 8pm on March 1st.

Tickets will be sold at the Emerson until sold out.***

Public lands will take center stage through the stories of hunters and anglers at the 3rd Annual Tales from the Backcountry on Friday, March 2nd, 2018 in Bozeman. A benefit event for the Montana Chapter of Backcountry Hunters & Anglers, this unique live storytelling festival brings together sportsmen and women from across Montana and abroad to hear tales of public lands hunting and fishing adventures. 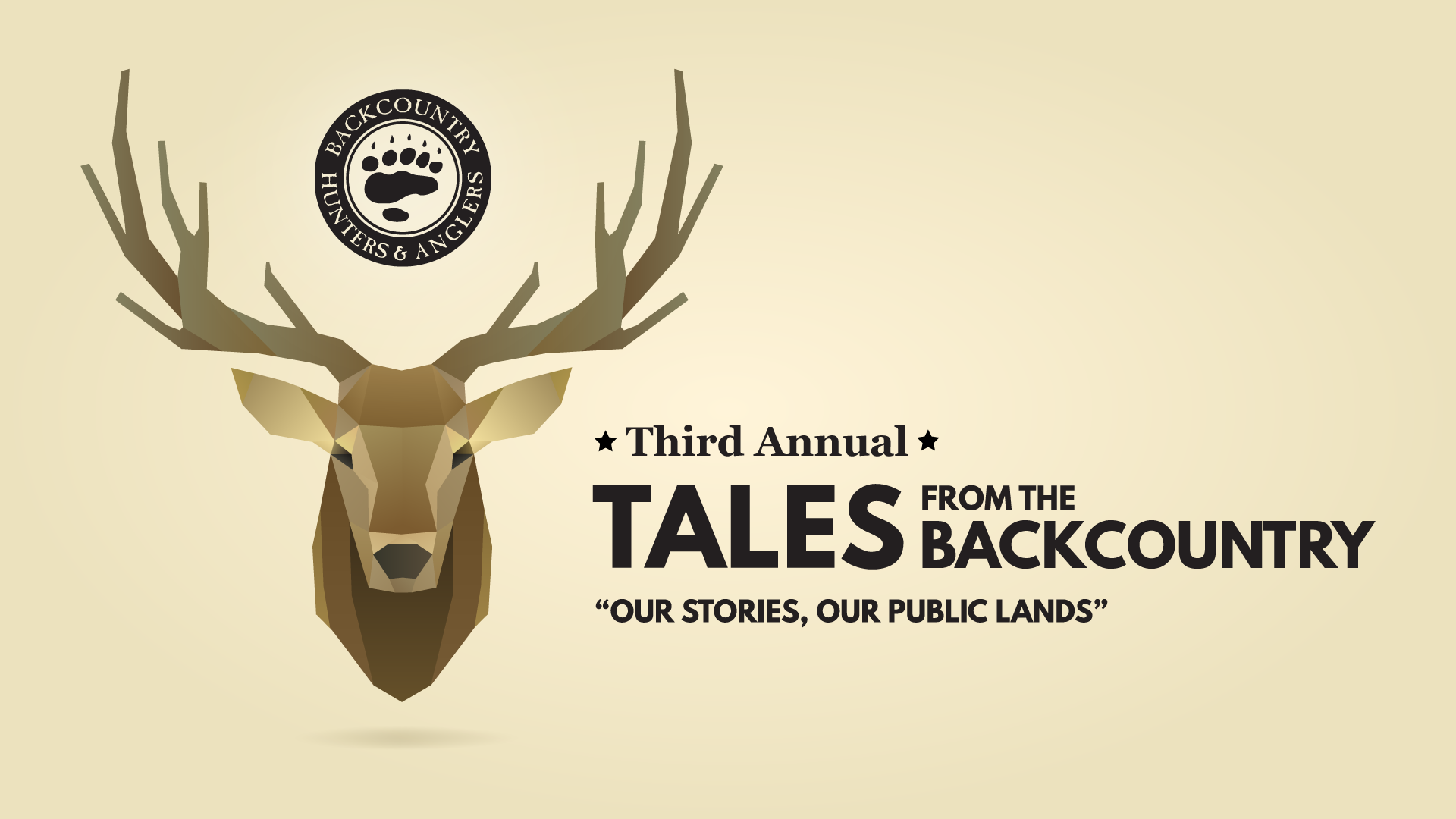 The 2018 Tales from the Backcountry “Our Stories, Our Public Lands” theme will incorporate stories that embody each hunter and angler’s unique relationship with public lands and waters. Among the speakers to grace the stage, will be the following:

For the second consecutive year, the event will be held at the Emerson Center for Arts and Culture with live storytelling taking place in the Crawford Theater. As in previous years, attendees will have the opportunity to win outdoors gear and prizes provided by sponsors such as Kimber Firearms, Orvis, Sitka Gear, First Lite, Simms Fishing Products, and more, as well as many local businesses. In 2018, the event has expanded to include these sponsors in an outdoors brand trade show, happening in the Emerson Ballroom before the event.

Doors open and the trade show begin at 6PM with live storytelling starting at 7PM sharp. Beer from local Montana breweries and wine will be available for purchase during the event. 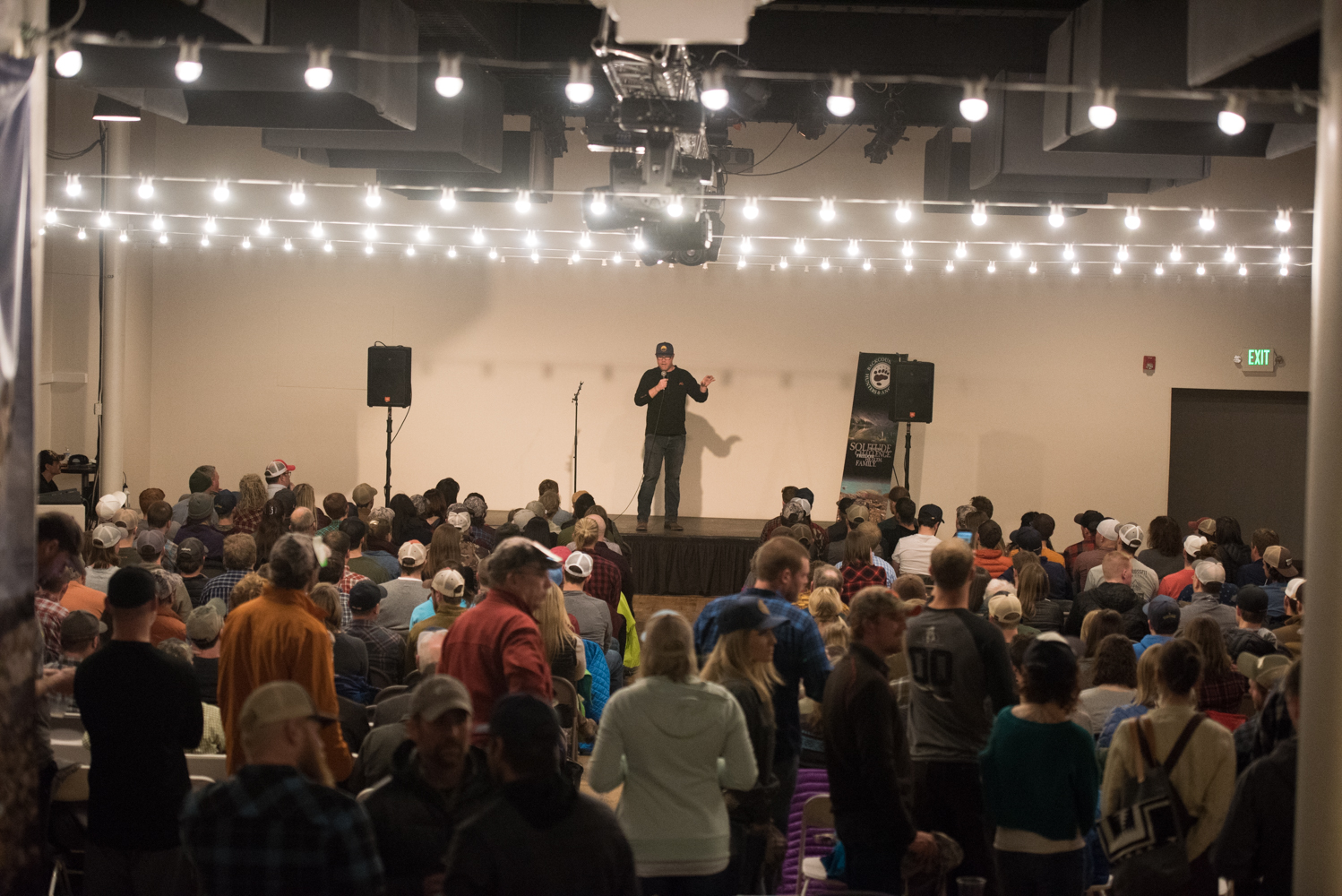 Randy Newberg is the host of the popular shows, On Your Own Adventures and Fresh Tracks with Randy Newberg, both focused on self-guided public land hunting in the Western U.S. He is also the host of HuntTalk Radio, otherwise known as Randy Newberg Unfiltered.

Hank Patterson is a self-proclaimed world renowned fly fishing expert and guide. Hank owns twelve copies of "A River Runs Through It" on BluRay and an additional eight on VHS. Hank is a Boy Scout dropout, an enemy of all snakes and a card carrying member of Trout Unlimited. If you see Hank in a bar, buy him a beer. If you see him on the river, prepare to forget everything you ever thought you knew about fly fishing.

Alexis Bonogofsky is a fourth-generation Montanan, hunter, goat and sheep rancher, writer and photographer who lives and works along the Yellowstone River in southeastern Montana. She is a founding member of Artemis Sportswomen.

Sam Lungren is an outdoors journalist originally hailing from Whidbey Island in Washington’s Puget Sound. After alternating seasons at Gonzaga University and salmon seining around Cordova, Alaska, grad school and an internship at RMEF landed him in Missoula. One night at the Union Club Bar, a gap-toothed Irishman told him of grand plans to give voice to the wilderness and keep the bastards from stealing our public lands. The budget was low, but he wanted a “kick-ass magazine” to help spread the word. Seemed like Sam’s cup of tea and he has been the editor of Backcountry Journal at Backcountry Hunters & Anglers for four years, watching the membership and staff grow tenfold.

Brian Barney is an adventure bowhunter that writes, films and does a podcast for Eastman's. He travels all throughout the west and Alaska searching for DIY, self-guided adventures on our public land. He has a knack for turning up and harvesting trophy animals in extreme environments.

Nicole Qualtieri is a public lands advocate both by desk and by foot. Her passion lies in bridging the divide between urbanites and the outdoors, and her first book project exploring the theme is currently underway. She’s a writer, outdoorswoman, and proud life member of Backcountry Hunters & Anglers.
Blog: http://non-hunter.com/

About the Master of Ceremonies:

Rachel VandeVoort, a Montana girl and mother of two, is the Director of Montana’s Office of Outdoor Recreation. Though her formal education really landed her the title of overeducated fly fisherman, and her career path may label her a gunslinger; she currently spends her time making sure Montana’s outdoor recreation economy and the public land and water that support and propel it are thriving.

share on
featured Montana BHA Montana Events
Get the latest news and stories, right to your inbox.
Search
Local Chapters