Hiking three or four miles through mountainous terrain with 30- to 40-pound packs into some of our nation’s great public lands estate isn’t stereotypical “blinds-and-decoys” turkey hunting, but chasing mountain Merriam’s in southwest Colorado’s backcountry can increase your odds of putting meat in the freezer.

During the spring 2021 turkey season, I joined Colorado Backcountry Hunters & Anglers Habitat Watch Volunteer Rick Hooley for a mountain Merriam’s hunt in the high and wild San Juan Mountains, a locale also known for its elk hunting. As explained by renowned trad bow elk hunter David “Elkheart” Petersen, two turkey hunters can team up and use the same tactics bow hunters use to pursue rutting bulls.

“When the calling action gets eyeballing close, two elk hunters—working just like two tom hunters—can be a deadly team,” David explains in A Man Made of Elk. “A rutting bull homing in on a bugle or cow chirp will focus his attention on the source of the sound, giving the shooter—who is set up between caller and game on the downwind side—a close, relatively relaxed, high-percentage shot opportunity.”[1] Our plan was to use similar tactics for mountain Merriam’s, the free-range protein prize of the spring woods.

After arriving in camp at 5:00 p.m., we hiked a three-mile loop searching for turkeys or sign but encountered little of either. However, at dusk several toms were gobbling from the roost within earshot of camp. In the morning they were, predictably, gobbling again. When gobbling is at its peak, the first gobbles usually ring out about 30 minutes before sunrise, often in response to the call of a crow, coyote or other loud sound. 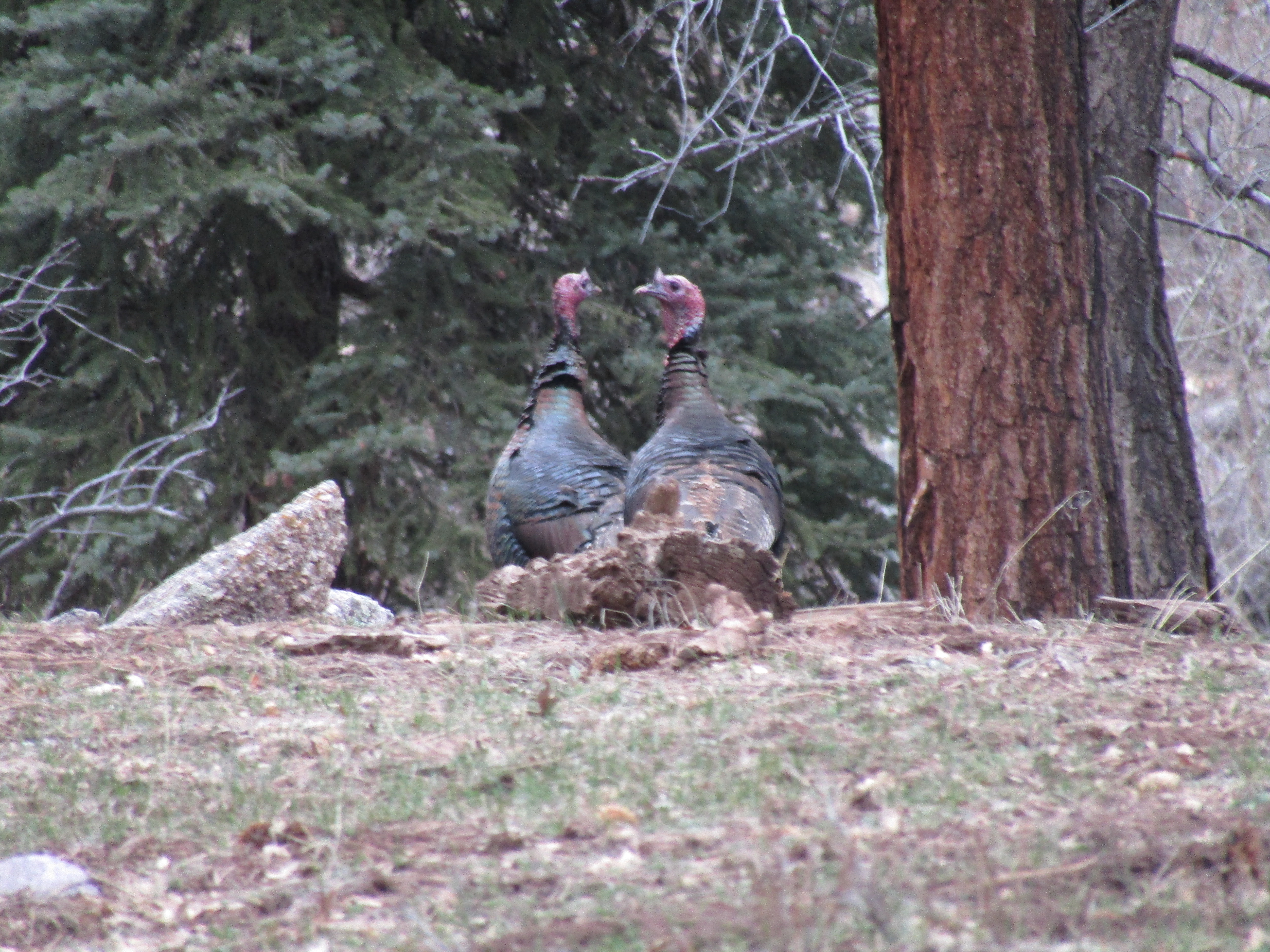 Gobbling increases with the amount of gray light and just before sunrise is typically the height of gobbling from the roost activity. By 6:30 a.m. we’d already had our first close encounter with a group of hens (the best decoys!) and a gobbling/strutting tom, but he kept his distance and faded into the underbrush. Our luck changed after we moved and two gobblers fired up about 100 yards out.

Rick started off the calling with the intention of luring them closer to me, which appeared to be working initially, but the best-laid plans oftentimes don’t go as planned. The longbeard duo skirted around me and moved in Rick’s direction. It was now my turn to yelp and purr to keep them interested and (hopefully) lure ‘em into shotgun range.

“Let the tom set the calling pace,” David Petersen wrote in Going Trad: Out There With Elkheart. “If he’s gobbling frequently and aggressively, yelp likewise. If he’s frugal with his gobbles, be equally stingy. And either way, be patient.”[2] At 7:45 a.m., our patience paid off. Rick shouldered his shotgun and we had our first mountain Merriam’s of the morning.

After tagging and stashing Rick’s bird, we encountered several more strutting (but unwilling-to-close) toms, then tried seducing a boisterous flock from across a nearby creek. No luck, so we crossed the creek, climbed an adjacent ridge and commenced calling from the opposite direction, which initially attracted a group of 5-6 jakes and hens.

Once they moved off, we spotted a gobbler approaching about 200 feet away, lost sight of him, then moved some 50 feet downslope and continued calling, with two toms subsequently responding. When neither showed up during 10-15 minutes of back-and-forth chatter, we stopped calling and contemplated moving again.

If a gobbler doesn’t make a move, consider going silent to make him think twice. If you call nonstop, he may think you’re excited and en route to him. Within minutes a tom came in silent (at 10:50 a.m.). He circled to my right, slowly approaching to within shotgun range, and the morning silence was momentarily shattered.

Calling is the essence of spring turkey hunting and much has been written about the subject. Wild turkeys can make up to 28 different vocalizations, but hunters need only learn two or three to be effective. Calls come in a variety of forms including box calls (possibly the easiest to master), slates and mouth diaphragms (which are harder to use but leave the hunter’s hands free). All are effective given the right bird and situation.

Initially, learn one and stick to it. I use slate calls while Rick has mastered slates, diaphragms and others. David Petersen uses multiple calls too but has an affinity for slate. “Slate calls in my opinion make the most realistic sounds,” he said. “My favorite is an old cheapie I bought 20 years ago, not even made any more … Go with something practical, nothing specialized or fancy.”[3] 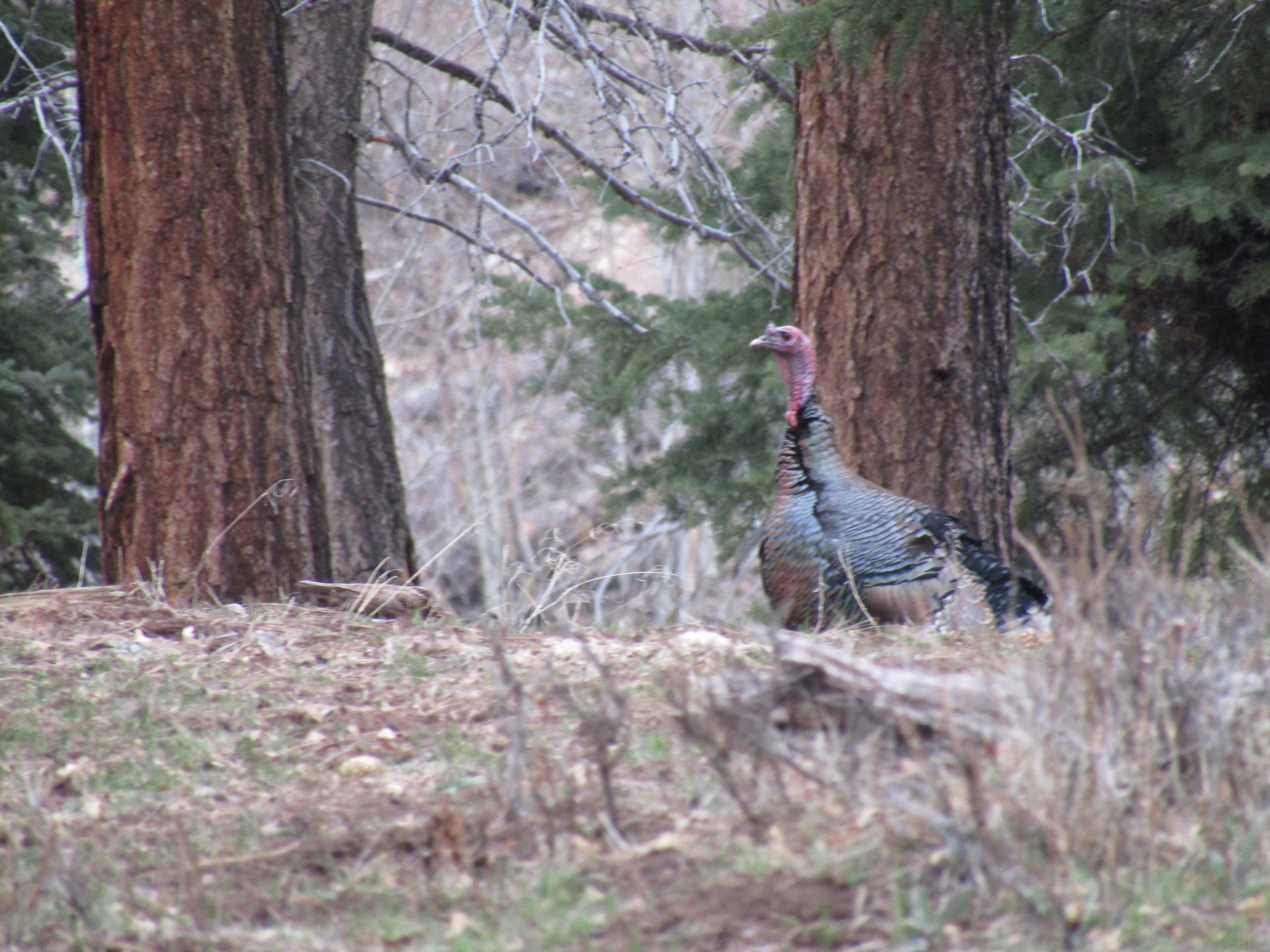 Most turkey calls are meant to imitate hens, including a variety of yelps, purrs and clucks. At first, learn the yelp and don’t worry about the rest. My calling—yelping and purring, mostly—is rough, at best, but love-struck toms aren’t too particular if in the mood. I’ve called in many toms over the years using these basic calls. Just keep it simple and avoid overcalling.

That said, when gobblers learn that a yelping hen can really be a guy with a 12-gauge shotgun, your calling needs to be convincing.[4] In a March 2011 American Hunter story (“Sage Advice from Old Pro Turkey Hunters”), Jim Casada wrote: “Henry Adams Davis suggested hunters should rely for the most part on the ‘plain yelp’ … ‘The plain yelp is the call to master’ … ‘It causes the death of more turkeys than all other call notes combined.’”[5]

“There are a couple of keys to successfully bringing the longbeard the final few yards into comfortable shotgun (or bow) range,” explains Outdoor News contributor Steve Piatt. “It’s critical that your calling is low-volume. If you’re calling so softly that you think the gobbler can’t hear you, that’s about the decibel level you want.”[6] “To borrow from the refrain of a country song,” Jim Casada adds, “a ‘little less talk’ translates to a ‘lot more action.’”[7]

Commenting in response to a Colorado Outdoors story, “Why Hunt Mountain Merriam’s (Part II),” southwest Colorado turkey hunter Mike Deming wrote: “I learned … some 25 years ago. I still consider myself as midlevel, still learning the language. Skunked more than not over the years … Last year (2020) my son, his wife and granddaughter all connected, and I did finally find one. Very unusual. I have killed them at snow level and down in the oak/cedar …” 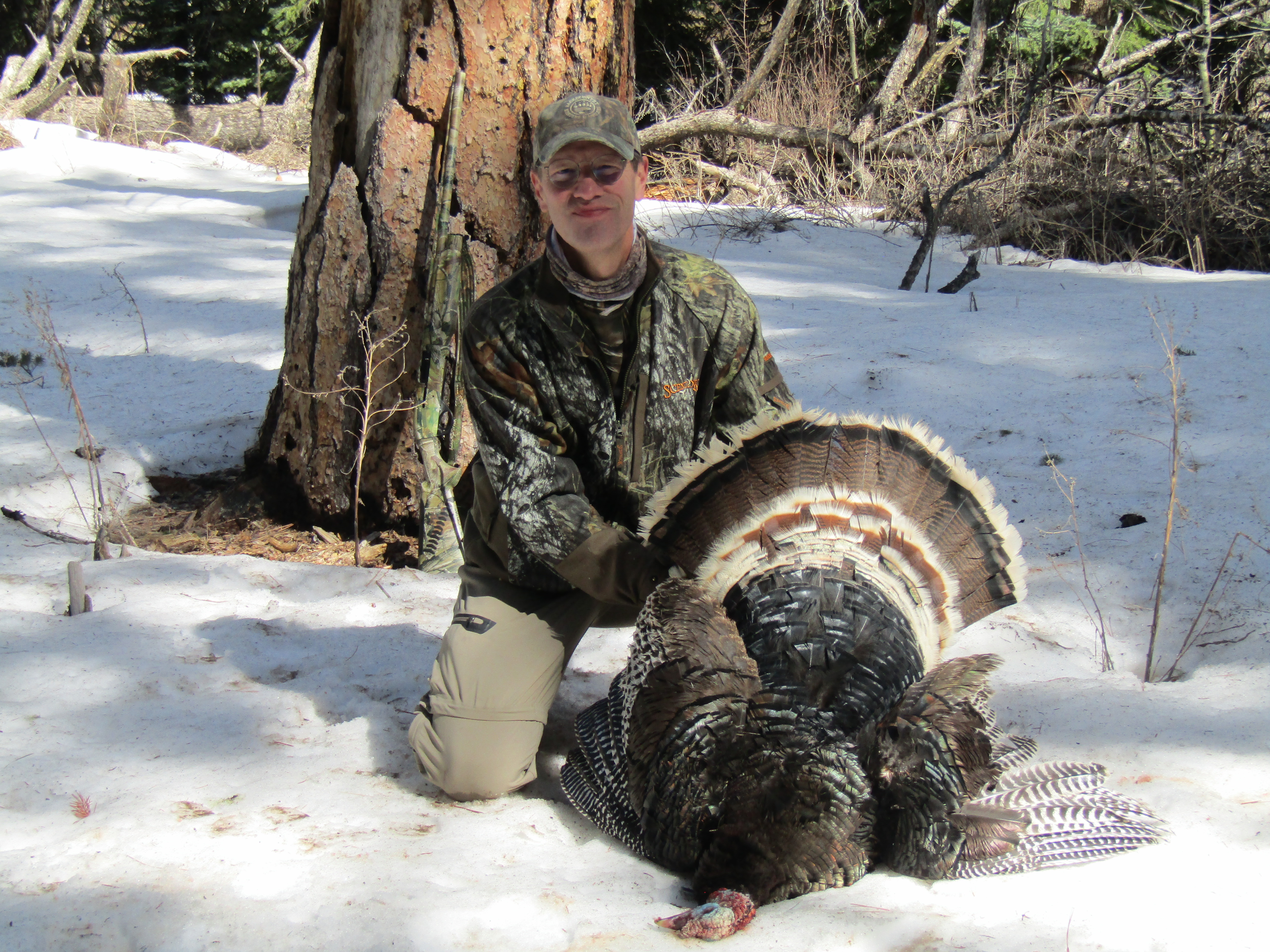 “But you said it,” Mike added, “the gobble at daylight is the greatest thing one can experience. My wife goes along just to hear that sound in the morning and when they roost at night.” The effect is so powerful that if toms didn’t gobble many of us wouldn’t hunt them. Their primordial and predictable gobbles from the roost at dawn and dusk alone is worth the minimal price of turkey hunting admission.

David Lien is a former Air Force officer and co-chairman of the Colorado Backcountry Hunters & Anglers. He’s the author of “Hunting for Experience: Tales of Hunting & Habitat Conservation.”[8] During 2014 David was recognized by Field & Stream as a “Hero of Conservation”[9] and during 2019 he was the recipient of BHA’s Mike Beagle-Chairman’s Award “for outstanding effort on behalf of Backcountry Hunters & Anglers.”[10]

[9] For additional information see: “David A. Lien Recognized by Field & Stream as ‘Hero of Conservation.’” AmmoLand.com: 7/2/14.