On Thursday June 2nd the full RI House of Representatives convened to discuss and vote on business including this year’s shoreline access bill, H8055A, introduced by Rep. Terri Cortvriend (D, Middletown, Portsmouth). Following a short discussion and expressions of support from Representatives including Judiciary Committee Chairman Robert Craven (D, North Kingstown) and Minority Leader Blake Filippi (R, Charlestown, New Shoreham, South Kingstown, Westerly) the vote was taken and every Representative who registered a vote offered their support. For what some considered a “controversial” policy proposal unanimous approval was a surprising but welcome outcome. 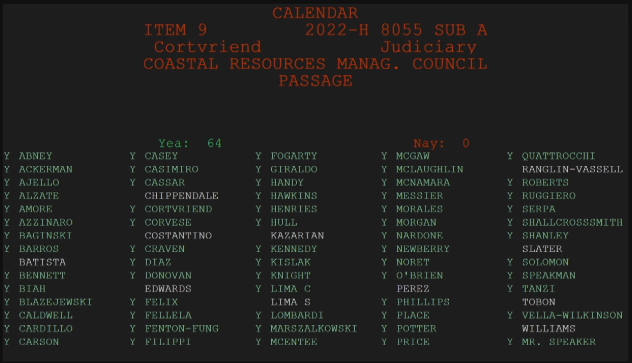 An image of the final vote in the Rhode Island House.

H8055A seeks to define where Rhode Islanders’ constitutionally protected “privileges of the shore” can be enjoyed by imposing a boundary six feet inland of seaweed line, referred to legally as the “recognizable high tide line”. While shoreline rights have been recognized and enshrined since colonial times the RI Legislature has never provided clear guidance on the boundary of where, exactly, they are protected. The bill currently moving through the legislature would finally provide necessary guidance, and would override a narrowly focused 1982 RI Supreme Court decision made in the absence of context or a factual record that found the property title boundary between private and public trust land occurred at the “mean high tide line”, which is almost always underwater.

Now that H8055A has passed the House it’s time to shift focus to the RI Senate, who will receive the approved bill in coming days. The good news is that members of the RI House and Senate represent the same constituents – and we know based on the unanimous nature of the House vote that this initiative carries a high degree of support from the Rhode Islanders who vote for elected officials in both chambers. But the transmitted bill will also represent the first time that RI Senators see an actionable proposal during this year’s legislative session. Because the House Study Commission on Shoreline Access concluded its activities mid-way through the legislative session a Senate bill has yet to be introduced, and no Committee activities have occurred either. If we’re going to move H8055A across the finish line this year we’ve got some catching up to do!