Since we last reported on shoreline access policy in Rhode Island quite a bit has occurred. The House Study Commission tasked with studying lateral 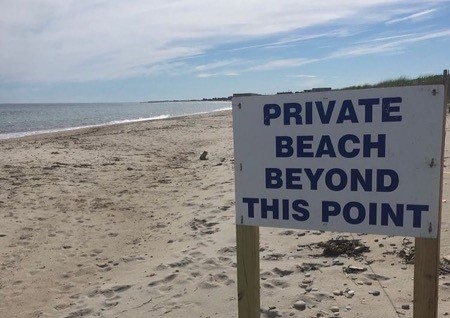 As is typical in Rhode Island’s legislative process H8055 was “held for further study” at the beginning of its public hearing. When bills are held in Rhode Island it’s difficult to determine whether they’ll ride out the remainder of the legislation session in limbo or if they’ll be placed on a subsequent Committee agenda at a later date for consideration. Unlike most, H8055 resurfaced on May 20th when it was placed on to the House Judiciary Committee’s Agenda for the subsequent week along with an updated version of the bill, H8055A. At that meeting the Committee voted unanimously to hold H8055 indefinitely and recommend passage of H8055A to the full House of Representatives. H8055A represents a substantial improvement to Rhode Island’s current shoreline access policy, and we need your support to get H8055A through the full House and Senate.

H8055A seeks to secure the “privileges of the shore”enshrined in Article 1, Sections 16 & 17 of Rhode Island’s Constitution by clearly defining the boundary between public and private property. Rights like fishing from the shore, gathering seaweed, leaving the shore to swim, and passing along the shore have been continuously upheld by Rhode Island’s voters since settlers secured the colony’s original Royal Charter in 1663, although the boundary where they can be practiced has never been clearly defined. The most recent RI Supreme Court interpretation (State v. Ibbison, 1982) determined that the boundary where trespassing could occur was at the “mean high tide line”, but that the burden of proof that the alleged trespasser knew the boundary must also be proven beyond a reasonable doubt. Because the “mean high tide line” is a long-term average of tidal elevations projected on Rhode Island’s dynamic shoreline that boundary is not stationary, is not readily observable to beachgoers, property owners, or law enforcement officers, and as a result every attempt to prosecute trespassing has been dismissed – including in State v. Ibbison. Additionally, recent geological surveys have indicated that the “mean high tide line” is almost always underwater on Rhode Island’s shore, which was not the intention of the Ibbison court it made its determination. To remedy these long-standing issues H8055A seeks to set the boundary at 6 feet inland the clearly observable seaweed line, so long as passable natural shoreline exists. Take action and send your letter!

share on
See other posts related to policy blog
Get the latest news and stories, right to your inbox.
Search
Local Chapters