Sportsmen Will Continue to Help Determine the Future of Sage Grouse 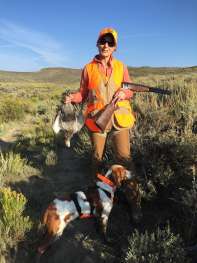 A pronghorn’s sharp exhale resonated through the pre-dawn air. Somewhere in the dark, the buck could easily see us awkwardly approaching a small rise without the use of our headlamps. Earlier, a dozen elk crossed in front our low beams as we bumped down a two-track towards this quiet stretch of high desert far from any pavement. The big game numbers in this region are impressive, but that’s not why we were creeping through the sagebrush in early April, armed only with binoculars.

As the light grew stronger we could see the antelope trotting away, nearly stepping on the animal we came to observe. The bird’s white chest stood out against drab surroundings as it shuffled about, making a plopping noise akin to the sound of faucet dripping. More greater sage grouse began flying in to join the others on their historic meeting ground on the side of this nondescript sagebrush knoll.

As these chicken-sized grouse conducted their elaborate mating dances to woo the observing hens, I couldn’t help but marvel at how much controversy these twitterpated birds have caused throughout the West. Last September, the U.S. Fish and Wildlife Service concluded that the greater sage grouse did not require protection under the Endangered Species Act. In their analysis of sage grouse populations – which included the best available science and took into account the extensive collaborative conservation efforts underway to help this bird – the Service determined that “the bird does not face the risk of extinction now or in the foreseeable future and therefore does not need protection under the ESA.”

Yet, at the same time, the Service’s Director, Dan Ashe, issued a caution: “We’ve written an important chapter in sage grouse conservation, but the story is far from over,” he said in a press release about the decision. “By building on the partnerships we’ve forged and continuing conservation efforts under the federal and state plans, we will reap dividends for sage grouse, big game and other wildlife while protecting a way of life in the West. That commitment will ensure that our children and grandchildren will inherit the many benefits that this rich but imperiled landscape has to offer.”

Phrases like “the story is far from over” and “this rich but imperiled landscape” highlight how the work to help sage grouse must continue. We, as sportsmen and women, have played a significant role in the decision to keep sage grouse off the Endangered Species List. Through commenting on management plans, letters to the editor, calling our congressional representatives, and rolling up our sleeves to help with on-the-ground habitat projects, BHA members have been a part of protecting not just this one bird, but also the hundreds of wildlife species that depend on healthy, intact sagebrush habitats.

The greater sage grouse’s habitat determines the future of so many other critters that we love to pursue and the very character of our treasured Western landscapes. Continued support is needed to help the Bureau of Land Management and Forest Service effectively implement their latest land use plans with greater emphasis on sage grouse habitat. I harvested my first antelope and my first mule deer on BLM land very near or within sage grouse core areas – places with the highest concentrations of this iconic bird. In addition to BHA, other conservation groups are working on collaborative approaches that promote cooperation over conflict to find solutions for both wildlife and people. Let’s lend our voices and our hands to continue the successful work doing that kept this bird from being listed.

After watching the dancing birds on their mating ground, we quietly backed away down the hill. Headed back towards civilization, I remember thinking about the accounts of early settlers who described flocks of sage grouse darkening the skies. Though we may never witness these birds in numbers like that again, we need to do all we can to sustain and grow the population we still have. Sage grouse serve as the proverbial canary in the coalmine for the health of the entire sagebrush ecosystem. As we lose sagebrush habitat, we don't just lose this one bird. We lose pronghorn, elk, mule deer, and our see-forever vistas. As sportsmen, we can help write the next chapter in the sagebrush story. Can you imagine public lands without sage grouse or mule deer or pronghorn? I can’t, and I won’t.

Hannah Ryan is the co-chair for the Montana Chapter of BHA as well as the communications specialist for a bird habitat conservation organization, the Intermountain West Joint Venture.

Hannah works as a communications specialist for a bird habitat conservation organization in Missoula. She is eager to follow in the boot tracks of those currently speaking out for the protection of public lands.