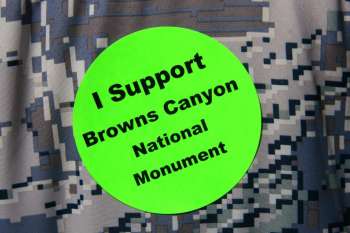 Back in October 1991 the Bureau of Land Management (BLM) released its Wilderness Study Report for the Browns Canyon Wilderness Study Area (WSA) between Salida and Buena Vista in Chaffee County, Colo., saying (in part): “Due … to its rugged topography, this WSA is important habitat for numerous wildlife species such as mule deer, mountain lion and bighorn sheep ... bobcat, black bear … and … elk.”[1]

Colorado U.S. Senator Mark Udall has introduced legislation that would protect 22,000 acres of Browns Canyon, to ensure that the canyon remains just like it is now for coming generations of hunters, anglers and others.[2] Salida area resident Bill Sustrich is a Word War II/U.S. Navy veteran and National Rifle Association (NRA) Life/Benefactor Member who raised a family of four youngsters on deer, elk, and trout he shot and caught in Browns Canyon and surrounding public lands.

“This is something that has to happen, one way or another. I’ve been advocating for protection of this beautiful backcountry habitat since the early 70's. I’ve watched the proposed area for protection go from 100,000 acres to just over 20,000. There has been plenty of compromise over the years and now is the time to ensure that the incredible fish and game resources on this wild landscape are secured.”[3]

Paul Vertrees of Cañon City is a retired U.S. Army veteran with 20 years of military service to his credit. He teaches army junior ROTC, coaches the shooting team at the local high school, is a senior hunter education instructor for Colorado Parks & Wildlife and an NRA member. Paul also knows Browns Canyon from numerous boots-on-the-ground hunting and angling experiences.

“I am a registered Republican, a fifth-generation Coloradan, and an informed backcountry hunter and angler. Over the years I’ve learned the tremendous potential these types of lower elevation wildernesses hold for the fish and wildlife, the local community, and the state of Colorado as a whole.[4]

“As a Republican, I’ve also learned that conservation and conservatism do indeed go hand-in-hand. Federal wilderness designation is, overwhelmingly, what the local communities want [for Browns Canyon]. It’s what’s right for Colorado. And it’s most definitely what’s right for the land itself.”[5]

Garrett Reppenhagen of Manitou Springs is a third-generation U.S. Army veteran who served as a sniper in Iraq and with peacekeeping forces in Kosovo. Garrett says Browns Canyon of the Arkansas River is more than deserving of national monument/wilderness protection.

“A beautiful river canyon near Salida, it offers one-of-a-kind fishing, rafting and hiking opportunities, and attracts tourists who help stoke economic development in this part of the state. The local community has been working on protecting Browns Canyon for a decade, and veterans—including those in the Vet Voice Foundation—outdoor outfitters and outdoor enthusiasts … are united in designating this area as a national monument.”[6]

Eric Lynn of Colorado Springs is a hunter, angler, father of four, small-business owner and 25-year U.S. Air Force veteran who appreciates the wild/roadless places we are blessed to enjoy in this great nation, especially among Colorado’s wide and wild swath of public lands and waters.

“Whether I’m packing out an elk with my rescued ‘wild’ burros, chasing trout on the Arkansas River, or just out for a day hike with my family, it is places such as Browns Canyon that sportsmen like me seek out to experience the solitude, challenge and overwhelming reward that I yearn for. That’s why I’m excited about the work that’s being done to protect the beautiful Browns Canyon section of the Arkansas River.[7]

“Sen. Mark Udall will introduce legislation to preserve the natural beauty of Browns Canyon for future generations … From an economic standpoint, this legislation will be a boon to local businesses and whitewater rafting outfitters. Udall’s legislation will ensure this section of river will remain wild and offer thrill seekers an unforgettable experience in the backcountry while aiding the local community.”[8]

The proposed Browns Canyon wilderness/national monument came from the ground up by local stakeholders from all across the political spectrum, and it’s been in the works for over a decade. Hunter-veterans like Bill, Paul, Garrett, and Eric—perhaps better than any others—understand the importance of preserving part of our great public lands heritage in its natural, primeval state.[9]

America’s veterans know that hunting and fishing are traditional values and activities that bind families and friends in healthy, outdoor activities. But without habitat and healthy game, the sporting endeavors fail to exist. Habitat equals opportunity, and sportsmen-veterans support protecting some of the best of the best in Browns Canyon.

David Lien is a former air force officer and chairman of the Colorado Backcountry Hunters & Anglers (www.backcountryhunters.org). He’s the author of Age-Old Quests: Hunting, Climbing & Trekking (http://outskirtspress.com/ageoldquests/) and was recently recognized by Field & Stream as a “Hero of Conservation.”[10]