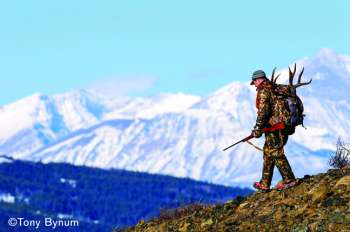 Montana hunters and anglers are thanking Sen. Jon Tester, the Department of the Interior and the Blackfeet Tribe for their continued commitment to conserve some of the finest big game habitat and native fisheries in the Treasure State: the Badger-Two Medicine area of the Lewis and Clark National Forest.

Named for the headwaters of Badger Creek and the Two Medicine River, the Badger-Two Medicine area has been under threat of industrial development as a result of oil and gas leasing in the 1980s. Almost the entire 130,000-acre Badger-Two Medicine was leased without consultation with the Blackfeet Tribe and in violation of bedrock environmental laws. A decade ago, Sen. Max Baucus negotiated several lease withdrawals from the region; this week’s action removed one of the last holdouts.

The Department of the Interior stated that cancellation of the Solenex lease is expected to be completed by Dec. 11. Sen. Tester also wrote a second letter supporting lease cancellation.

Here's what Montana sportsmen are saying about this action...

“It’s a diverse habitat, and that results in a diversity of wildlife, both game and non-game. It’s a unique area,” said Ryan Rauscher, area biologist for Montana Fish, Wildlife & Parks in Conrad. “It is real backcountry, but with access. If you step off US Highway 2 you will realize you are in the backcountry in short order.”

“The cold, clean headwaters of the Badger-Two Medicine are critical habitat for native cutthroat trout surviving east of the Continental Divide,” said Dan Short, Flathead Valley angler and former chairman of Montana Trout Unlimited. “These sources of pristine water will only grow more valuable in the future.”

“The benefits of conserving the Badger-Two Medicine extend far beyond that particular habitat,” said David Chadwick, executive director of Montana Wildlife Federation in Helena. “Everyone in Montana who appreciates wild country, herds of elk and a mountainside with a grizzly on it stands to gain.”

“The Badger-Two Medicine is one of the finest pieces of wildlife habitat remaining in North America,” said Ryan Busse of Kalispell, a board member of Backcountry Hunters & Anglers. “Sen. Jon Tester deserves special thanks for making sure the Badger-Two Medicine receives the attention it deserves from Washington, D.C.”

share on
See other posts related to the campfire Montana BHA montana issues
Get the latest news and stories, right to your inbox.
Search
Local Chapters