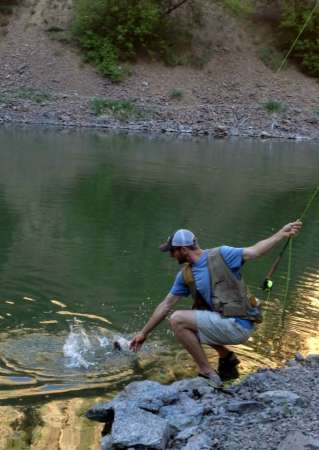 As sportsmen-conservation organizations representing millions of hunters and anglers nationwide, we ask you to oppose any legislation that would block the administration’s very deliberate and vital action to clarify and restore longstanding Clean Water Act protections for headwater streams and wetlands across the country.

America’s 47 million sportsmen rely on clean water for access to quality days in the field hunting, angling, and enjoying other outdoor-based recreation. When wetlands are drained and filled and streams are polluted, we lose the ability to pursue our passions and pass them on to our children. Moreover, pollution and destruction of headwater streams and wetlands threaten America’s hunting and fishing economy – which accounts for over $200 billion in economic activity each year and 1.5 million jobs, supporting rural communities in particular.

Since its enactment, the Clean Water Act has been highly successful at improving water quality and stemming the tide of wetlands loss. However, Clean Water Act safeguards for streams, lakes and wetlands have been eroding for over a decade because of a pair of Supreme Court decisions (Solid Waste Agency of Northern Cook Cty. v. Army Corps of Engineers (2001) and Rapanos v. United States (2006)) that cast doubt on more than 30 years’ worth of Clean Water Act implementation. As a result of the decisions, 60 percent of stream miles in the United States, which provide drinking water for more than 117 million Americans, are at increased risk of pollution and destruction. Wetlands are at risk as well. In fact, the rate of wetlands loss increased by 140 percent during the 2004-2009 period – the years immediately following the Supreme Court decisions. This is the first documented acceleration of wetland loss since the Clean Water Act was enacted more than 40 years ago during the Nixon administration.

There is widespread agreement that action is necessary to clear up the confusion caused by the SWANCC and Rapanos decisions. Stakeholders on all sides of the issue and the Supreme Court have called on the U.S. Army Corps of Engineers (Corps) and Environmental Protection Agency (EPA) to conduct a formal rulemaking to clearly define which waters the Act protects. Fortunately, the administration is doing just that. On March 25, 2014, the Corps and EPA jointly proposed a rule for public comment.

Members of our organizations, who include farmers, ranchers, landowners as well as conservationists, seek pragmatic, common sense solutions to restore protections for the nation’s wetlands, streams, and other waters that existed prior to the SWANCC decision. We also recognize the need to maintain existing exemptions that have been in the Act since 1977, including those for standard agricultural and silvicultural practices. The current rulemaking is the best chance in a generation to restore protections for streams, wetlands and other waters critical to our sporting traditions and outdoor economy, give greater certainty to the regulated communities and shore up longstanding agricultural exemptions.

We strongly oppose any legislation that would bar the administration from proceeding with the rulemaking, because it could prevent the public from commenting on and improving the proposed rule and it would perpetuate existing confusion over one of our bedrock conservation statutes and the inefficient implementation thereof. After more than a decade of confusion, we are finally in an open, public process to restore critical Clean Water Act protections for waters important to sportsmen, and it needs your support.

We know you understand the value of wetlands to waterfowl nesting, of headwater streams to trout and salmon spawning, of coastal estuaries to scores of food and gamefish, and of other waters to high-quality aquatic habitat critical to the success of hunters and anglers in the field. Therefore, we ask you once again to oppose any legislation that would scuttle the current Clean Water Act rulemaking.

We look forward to working with you in the months ahead to safeguard our waters, habitat, and the hunting and angling traditions that are important to so many Americans.

share on
See other posts related to issues habitat clean water
Get the latest news and stories, right to your inbox.
Search
Local Chapters