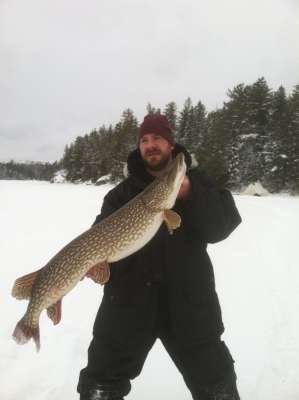 The following op-ed originaly appeared in the Grand Rapids Herald Review on February 4, 2014.

PolyMet is one of several companies considering sulfide mining operations in northeastern Minnesota. During recent public meetings in Duluth, Aurora, and St. Paul on the PolyMet Mining NorthMet Project Supplemental Draft Environmental Impact Statement (SDEIS), mining companies sent busloads of sulfide mining supporters to make a show of force, but most of the substantive testimony came from mine opponents.

Hunters and anglers are particularly concerned about the impacts of sulfide mining. “I’m an outdoorsman, and I’m concerned about water quality,” said Jim Juntti of Barnum. “I asked them what the plan is if something happens and that (tailings basin) opens up and things go bad … They didn’t really have an answer for me.” The Minnesota DNR Division of Fish and Wildlife said the project will definitely affect fish and wildlife, noting that “this increase in risk to water quality and fish habitat is a significant impact of the project.”

That’s because when sulfides interact with oxygen (in our air) and water (in rain or snowmelt, for example), they create sulfuric acid—the same caustic substance used in car batteries. A common term for this pollution is Acid Mine Drainage (AMD), which will continue as long as sulfides, water, and air mix. No new technologies have emerged that can stop the chemical reaction once it begins. Sulfide mining in water-intensive areas has never been done without contaminating waterways and watersheds.

Although mining companies say “reverse osmosis” technology will fix AMD, this is not “new” technology. It has been around for decades. If it could solve water contamination caused by metal mining it would have done so by now. Reverse osmosis cannot even solve water pollution at Minnesota’s taconite mines. It was tested for Mesabi Nugget and didn’t work.

A pit “lake” would be left whose water levels would need to be maintained through pumping to prevent contaminated overspills into the nearby Partridge River. A tailings basin pond would need to have its water levels maintained through pumping to prevent contaminated water from over-topping the dams and entering the nearby Embarrass River.

The first draft of PolyMet’s environmental impact study was roundly criticized for lacking any meaningful discussion of financial assurance. That’s because sulfide mining companies know (as stated by the Northern Minnesota tribal cooperating agencies): “Minnesota has existed for 155 years. The U.S. for 237 years. The notion that [cleanup] instruments will be available 500 years from now is not believable.” Most Minnesotans agree.

Partly as a result, the St. Louis County DFL unit in Duluth passed a resolution saying the committee “finds that sulfide-ore mining is significantly different from taconite mining, has unacceptable environmental impacts and should not be allowed in the sulfur-bearing Duluth Complex from the Boundary Waters to Lake Superior.”

Rob Davis, of the Twin Cities, is a businessman and Eagle Scout: “I appreciate jobs. I appreciate the value of wilderness. There is a near certainty of millions of dollars of cleanup. This is not a good deal for Minnesota.” State Auditor Rebecca Otto agrees: “This kind of mining has not gone well anywhere it’s been done … we’re thinking about the financial burden it could place on the next generations.” Another opponent said, “the stupidity of it all is breathtaking.”

“In Minnesota, the fishing industry alone supports 50,000 jobs and recreational fishing brings in $3 billion a year,” adds Minnesota Backcountry Hunters & Anglers vice-chair Erik Jensen, “which would be in jeopardy when acid-mine drainage (AMD) leaches into creeks, streams, rivers and watersheds, eventually ending up in Lake Superior.” Bruce Johnson, a former MPCA worker and DNR field chemist, said it best: “We don’t want to be left with a bunch of mining pits full of polluted water that even ducks won’t land on.”

In a few months, winter will turn to spring and Minnesota’s anglers and other outdoorsmen and women will prepare for another fishing (and then hunting) season. And if there’s one thing all Minnesotans can agree on, when we venture into northern Minnesota’s Iron Range we don’t want to encounter sulfide mining’s legacy—polluted holes in the ground. Sulfide mines bear no second crop.