The U.S. House of Representatives is meeting this week to consider a massive defense spending package. Tucked inside the bill is 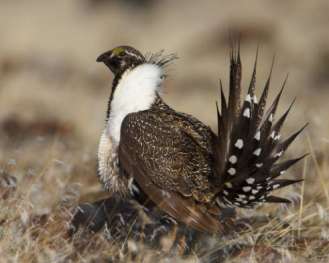 a rider, H.R. 4739, the misleadingly named Greater Sage Grouse Protection and Recovery Act of 2016, which would block implementation of conservation measures that helped avert an Endangered Species Act listing of the greater sage grouse in the fall.

Last September, following an unprecedented collaborative effort among federal, state and local governments and a wide range of stakeholders, the Interior and Agriculture departments finalized land use plans to protect habitat for the imperiled sage grouse and more than 350 species of fish and wildlife, including mule deer, elk and pronghorn. This conservation strategy sustains natural resources critical to fish and game, hunters and anglers, and our economic well-being.

Yet some members of Congress seem intent on demolishing years of collaborative work. For the second year in a row, Rep. Rob Bishop has introduced a measure in the National Defense Authorization Act, or NDAA, that would halt efforts already underway to conserve sage grouse habitat. The House Armed Services Committee will consider the legislation tomorrow!

Contact your Congressman here and ask them to oppose any language or amendments that would undermine greater sage grouse conservation within the NDAA.

share on
See other posts related to issues bha news sage grouse
Get the latest news and stories, right to your inbox.
Search
Local Chapters