It Is Time to Designate Southern California Steelhead as Endangered

The story of southern steelhead is a story of concrete and progress, of the forces of human will over the balance of nature. 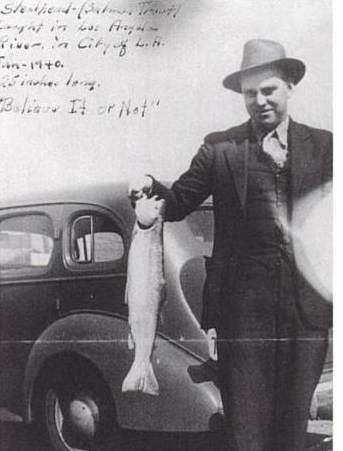 With fedora hat and three-piece suit, the man stands – a symbol of progress and success, an icon of the American dream – in front of a 1938 Chevy holding a silvery steelhead by its gills, the last known of its kind in the LA River, a sad reminder of the past and haunting memory of our future.  With a cockish grin, he smiles likely not knowing he holds the entire history of a species in his hand. “Believe It or Not” the caption reads. The photo (Courtesy family of Dr. Charles L. Hogue) was taken in 1940, but today that picture is hard to believe. It is hard to believe that surges of silvery steelhead once followed Southern California heavy rains and were so thick in some places that reports were people could “walk the backs of the fish” across the river.  With all the buildings and freeways, it is hard to believe the Chumash once relied on steelhead as a bountiful food source or that there was a sport fishery in some rivers, which harbored over 30,000 fish or that the fishery extended from San Luis Obispo down to Mexico and as far east as the base of San Bernardino Mountains.

It is hard to believe because today southern steelhead are listed as federally endangered under the Endangered Species Act. Only a few hundred of them make the annual migration to Southern California waters each year, and that number continues to decline.  As CalTout is suggesting, it is time to list southern steelhead as endangered under the California Endangered Species Act (CESA), but when we do so, let’s not sit back on our laurels and congratulate ourselves for a victory.

A Brief History of Southern Steelhead

Steelhead are anadromous fishing meaning they migrate from where they are born in freshwater to the ocean and back again as part of the spawning cycle. They spend the first year of their life in a river.  They eat and grow as big as they can so that the following year they can make the journey to the ocean where they presumably eat a lot more, flee from predators like killer whales and then return to their native waters to spawn. Unlike salmon who spawn and die, fertilizing the river and their eggs, steelhead can spawn, swim back to the ocean and then spawn again, and unlike salmon, they sometimes make this journey multiple times.  In fact, summer run steelhead, the fish that begin returning to west coast streams in the late spring through the fall can sometimes live in a river system for up to a year before deciding spawning conditions are optimal. Southern steelhead have been known to make similar sacrifices. In order to make this journey, the fish require cold, free-flowing water. Although southern steelhead are quite a bit hardier and can survive in warmer water than their northern counterparts, they are still at major risk in warm and polluted waters.

The history of southern steelhead is one wrought with strife and concrete. From 1920 to 1953 the Corps of Engineers entombed most Southern California rivers in concrete in the name of flood protection and water storage.  Rivers were transformed from free-flowing riparian habitats to watery coffins so that developers could erect monuments like the Rose Bowl, Dodger Stadium, and roads along the San Gabriel River. Steelhead have suffered in the name of progress. From channelizing the LA River in 1938 to the Matilija dam a decade later, development in Southern California has decimated the species. The final nail in the coffin came with the Bradbury Dam in 1953 as this blocked the last major free flowing waterway for steelhead in the Southland.  These dams and concrete channelized waterways not only blocked passage for fish migration but often heated the waters beyond 77 degrees, making life nearly impossible for steelhead. As Char Miller has argued, a slow moving, warm river was “not a landscape steelhead could love…What worked for us” killed the steelhead.[1]

While development and progress have marked the end of healthy steelhead ecosystems, the fish do have many champions, including the California Coastal Conservancy, Friends of the LA River, CalTrout, Trout Unlimited, the Environmental Defense Center, and the folks at NOAA who largely drafted the Southern California Steelhead Recovery Program, the goal of which since 2012 has been to recover sustainable steelhead populations in the Southland. The plan cites habitat restoration as one of the major tasks for restoring steelhead habitat, yet this still remains the biggest hurdle. Development continues along Southern California riparian habitats and few fish barriers have been removed, even though plans have been in the works for over a decade on some like the silt-lined Matilija dam.  As hardy as southern steelhead are, they have struggled to combat progress and concrete.

Why Steelhead Matter and How to Restore Them

This story, however, runs deeper than concrete rivers, fedora hats, and deadbeat dams. This is also a story about ecosystem health, about killer whales chasing anadromous fish, about seals and sea lions, about trees and the health of our vast ocean backcountry. It is a story about reconnecting our oceans with the mountains. A healthy ocean means southern steelhead are swimming in it.  Healthy mountains means steelhead are spawning and eventually decomposing in the headwaters providing essential nutrients for plants and wildlife, which in turn provide cover and forage for animals like Bighorn Sheep.  It all is connected.  And it is also a story about reconnecting our culture to our heritage and a past often forgotten.  Restoring habitat for steelhead not only restores our riparian waterways but it can also reconnect us to our cultures. From Cannery Row to Chumash natives celebrating the return of the silvery surge, southern steelhead are an integral component to California history.

To restore the southern steelhead to sustainable levels we need to remove dams and other fish barriers, naturalize the riverbanks, restore riparian habitat, and stabilize the urban/wilderness interface in Southern California.  Thankfully there are steelhead gene bank populations in the East and West Fork of the San Gabriel Rivers, upper Santa Ana River, Piru Creek, and others, so if we remove barriers and these rivers are unleashed and the steelhead are allowed to return to their natal waters, we could perhaps see a return of a fishery and a strengthening of both oceanic and riverine ecosystems similar to what happened on the Elwha. Doing all of this requires monumental lifting from a diverse coalition of conservation and fishing organizations.  The question remains: does listing the southern steelhead as endangered under the CESA actually accomplish all these things?  In all reality, it likely does not.

Listing southern steelhead under CESA may garner more funding for planning and restoration efforts, particularly for barriers like the Matilija and Rindge dams, but the issue is listing steelhead under CESA would only protect the fish below existing barriers. We know that truly restoring the species means connecting the fish below the barriers with the genetic populations above. Without doing that we are resigning ourselves to a world where southern steelhead will perpetually remain on CESA with no hope of removal.  What is the point of a CESA listing if not to remove species once populations have been restored?

The truth is southern steelhead have been listed under the federal ESA since 1997, yet we have not seen the type of habitat restoration needed as cited in the recovery plan.

To truly restore the southern steelhead will require an ecosystem approach with diverse funding and long-term engagement from various stakeholders, NGO’s, government agencies and individual anglers.  As Lewis McAdams, founder of Friends of the LA River, once said, “It took more than forty years to screw the river up. I’m sure it will take more than forty years to bring it back to life again.  From the beginning we said that not until…the steelhead trout were swimming up the [LA] river to spawn…would [our] work be done.”  We have much work to do to revitalize Southern California rivers and bring back steelhead. Let’s get to it.

In the end, yes, we should designate southern steelhead as endangered under CESA, but we should not pat ourselves on the back as job well done and wipe our hands of the real problems.  We should see the CESA designation as a temporary stopgap, not a permanent solution.  We should actually get to work on saving what little chance we have of restoring southern steelhead to prominence by removing barriers and naturalizing riparian habitat.  Can you imagine a new story, one where you drive down to the LA River with your kids and point into the rushing waters in the direction of chrome-backed fish slipping their way through the seams and say, “These fish came from the ocean, and soon their offspring will return.”

About Ned Weidner
share on
See other posts related to california issues California BHA california news policy
Get the latest news and stories, right to your inbox.
Search
Local Chapters