The following Op-Ed was published by the Oregonian on December 9th.  The online version of the article can be found here. 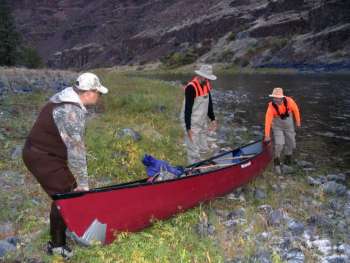 As one of many stakeholders of the 2.1 million acres called the O&C lands in western Oregon, Backcountry Hunters & Anglers has been actively engaged in helping shape this legislation which Senator Wyden hopes will become law. BHA is a boots-on-the ground conservation organization of backcountry hunters & anglers who work to protect wild public lands, waters, and wildlife. This legislative approach to a complex issue provides a chance for modern management of these lands. For 18 economically depressed counties, this proposed legislation also provides the opportunity for new jobs and a steady stream of revenue by increasing timber harvests in a scientific, sustainable, and ecological way. For sportsmen, it has many upsides as well.

The fact that half these lands will be set aside for conservation is encouraging news for thousands of people who make their living from hunting and fishing. Outdoor recreation jobs are big business in Oregon - supporting nearly 141,000 jobs and generating nearly $13 billion dollars in revenue according to the Outdoor Industry Association. The nearly one million acres set aside in this legislation represents the biggest protection of public lands for sportsmen in decades in Oregon.

For the first time, there will be legislation protecting sensitive riparian areas for wild salmon and steelhead which is a benchmark brand for the state. Backcountry Hunters & Anglers is also encouraged by the scientific approach to timber harvest that this legislation proposes. As an example, backcountry hunters have noted a continuing decline of wildlife over the past decades because of a lack of active forest management. Tree canopies have become so dense that forage for elk and deer cannot grow and wildlife departs for better habitat. This legislation will help reverse that situation where appropriate and this active management benefiting wildlife should be very encouraging news for all hunters. And, for the first time, legislation will specifically protect old growth timber from being harvested.

While the House of Representatives with the help of Congressmen DeFazio, Walden, and Schrader have already passed a bill for managing these lands, the President has said he will not sign that bill. Senator Wyden’s bill includes suggestions from most interested parties, relies on scientific forestry management and provides key protections for wildlife, water, and old growth timber while promoting economic sustainability in rural communities. Senator Wyden believes this bill will be more acceptable to President Obama.

As Senator Wyden noted in the rollout of his legislation, “Nobody will get all they want. Nobody will get all they think they deserve, but everyone will get what they need.” Backcountry Hunters & Anglers will continue to monitor this legislation to ensure that what we need, which is quality wildlife habitat to provide robust native species, remains a pivotal part of the bill. We appreciate Senator Wyden’s open door policy and will continue to engage in the conversation as this legislation moves forward.