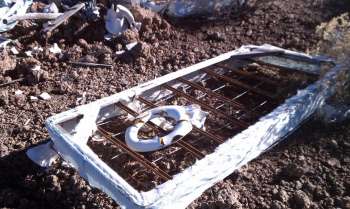 I've just concluded a 1300 mile tour of Southeast Oregon on behalf of Backcountry Hunters & Anglers. SE Oregon is mostly public land managed by the BLM. It is an ancient land under attack by modern encroachment that is threatening wildlife habitat. Mule Deer herds have been declining for over 30 years and the Sage Grouse is under consideration for listing as an endangered species. Such a listing would severely impact public access to these lands. Fires that have decimated nearly a million acres of habitat have been a major problem, but another is illegal off-road motorized use of these public lands. I witnessed much damage in sensitive core areas supporting the Sage Grouse and photographed examples of disregard in the backcountry including trashed campsites and decimation of public lands by motorized vehicles tearing up the habitat. Public lands are not a public dump or a drag strip! Backcountry Hunters & Anglers is not an anti-ATV organization either. We are a boots-on-the-ground conservation organization working to protect our wild public lands, water, and wildlife. We also use motorized vehicles but we strongly advocate remaining on designated trails and where the road ends we hike or pack into the areas we fish and hunt.

In talking with biologist Craig Foster of the Oregon Department of Fish and Wildlife of Lakeview, it's also apparent that indiscriminate use of motorized vehicles in the SE Desert is also spreading invasive weeds that are attacking the sage habitat that sustain Mule Deer and Sage Grouse populations. This region is so vast it's easy to get off-road without a second thought. But, the consequences are apparent.

The BLM is currently preparing new Resource Management and Travel Plans for this region and now is the time for all stakeholders to speak up. I encourage the outdoor community to contact both the Lakeview and Vale BLM districts. Contact information is online for easy access. Speak up and get involved. The future of these ancient lands and our access to them depends on our collective voice and a cooperative and collaborative management approach. For more information, please visit