For generations, this wild watershed has fostered both a sustainable food source and a sustainable workforce for more than 14,000 people who are currently supported by Bristol Bay’s renowned sportfishing, hunting and outdoor recreation economy. The rich natural resources found here sustain Alaskans and Americans for generations to come, thus multiplying their worth indefinitely.

As highlighted in this video produced by our friends at Trout Unlimited, Bristol Bay is one fishery that deserves to remain as it is.

"The equation for Pebble Mine is simple. Either the salmon are important enough to protect, or you're willing to gamble on the world's largest sockeye fishery based on the history of large mines and their ability to never fail. Ever. From the time the mine goes into production until forever, there is a risk of a leak, spill or collapse resulting in toxic slurry flooding into the watershed that is the home of one of the largest salmon runs in the world."

For more than a decade, Backcountry Hunters & Anglers has been working alongside Alaskans and more than 1 million American hunters, anglers and businesses to oppose development of the Pebble Mine. Bristol Bay is home to indigenous cultures and supports more than 14,000 jobs in the fishing industry, fueling a sustainable economy critical to Alaska. Through a unique national alliance that includes Alaskan native tribes, commercial fishermen and sportsmen, we have come together to defend a storied landscape that has continues to sustain a culture built by salmon.

The Project and Threat:

Bristol Bay is threatened by a proposal to develop one of the largest gold, copper and molybdenum mines in the world. The mineral deposit sits in the heart of salmon country, in the headwaters of the famed Kvichak and Nushagak Rivers. One natural disaster could cause catastrophic damage to the watershed and livelihoods of thousands. As former Sen. Ted Stevens, a Republican from Alaska, stated, “I am not opposed to mining, but [Pebble] is the wrong mine in the wrong place.” 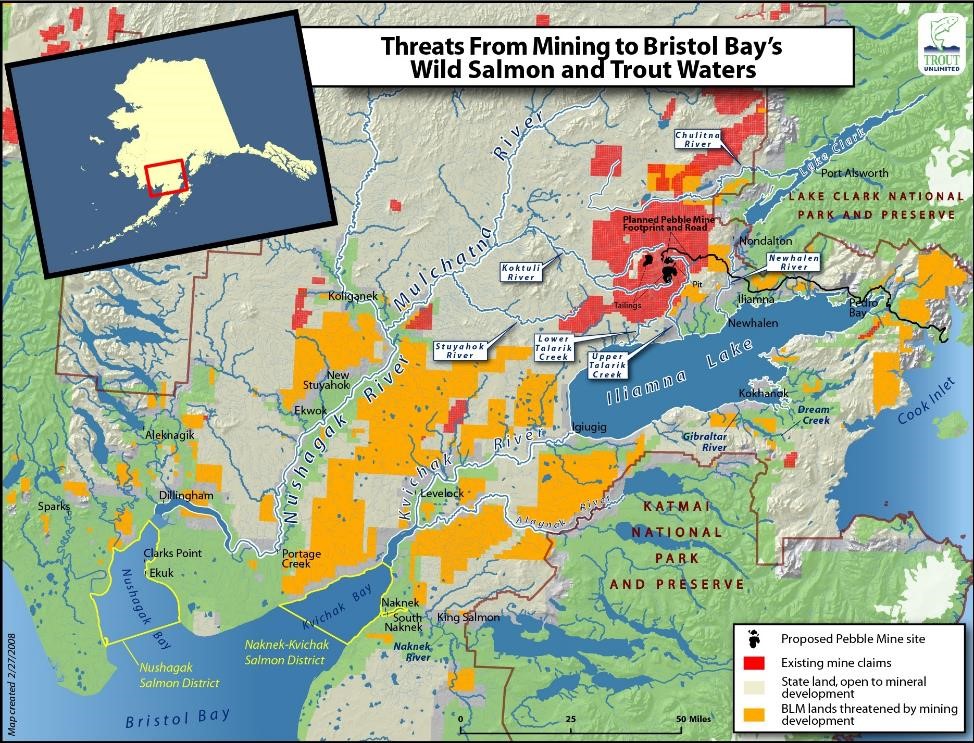 The Politics and History:

Minerals in Bristol Bay were first discovered 30 years ago by the Canadian mining company, Conoco, though it was not until 2007 when the Pebble Partnership was formed that a formal mining proposal in Bristol Bay was put forth. Soon thereafter the environmental review process for development of the mine commenced, and in 2011, the Environmental Protection Agency began reviewing the Clean Water Act 404 permit.

Through the EPA’s extensive review process, scientists found that development of the Pebble mining project would result in the following:

In 2017, the EPA waffled on whether to act on this science by proceeding with the Clean Water Act determination, but vowed to carry on with the review process. Unfortunately, the U.S. Army Corps of Engineers decided to move ahead by releasing their Draft Environmental Impact Statement (DEIS) for Pebble Mine. The DEIS is a troubling step forward for Pebble Mine to begin development and it’s imperative that advocates for Bristol Bay way in with public comments before the comment period ends on June 29, 2019.

This environmental analysis is designed to evaluate risks, impacts and benefits. While the DEIS unveils four alternative actions that may be chosen should the permit be granted for development, it fails to address the full impact of mining the Pebble deposit in its entirety by only analyzing the initial phase.

Hunters and anglers must speak up and urge federal decision makers to conserve Bristol Bay and reject the Pebble Mine. Please join BHA in making your voice heard. Tell the U.S. Army Corps of Engineers to stand with American sportsmen and women in conserving Bristol Bay, protecting our economies, and ensuring the future of our traditions.

Follow us for public land conservation, hunting and fishing news and resources. We are the voice for our wild public lands, waters and wildlife.

share on
See other posts related to alaska bha priority landscapes alaska issues
Get the latest news and stories, right to your inbox.
Search
Local Chapters