Reports from the Field: The Impacts of Illegal OHV Use on Hunting & Fishing

The following is a compilation of reports and stories from hunters, anglers and public land users about how illegal OHV use has impacted habitat and hunting and fishing opportunities.  If you have a story to share, please 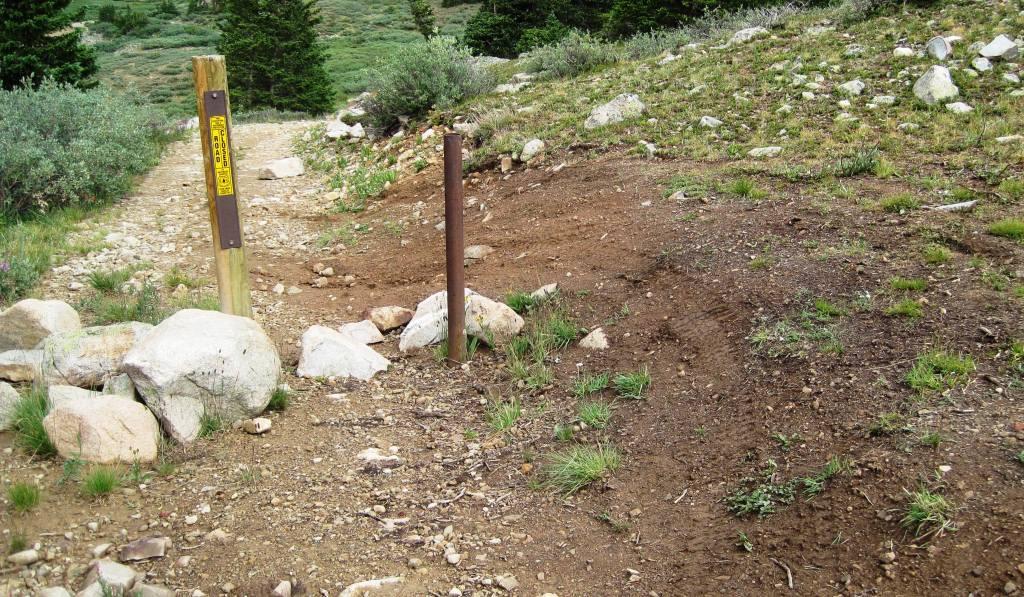 send it by email.

Jerry explains a time when:

Some hunters on ATVs insisted they would haul his elk out for him if they could get their machines to the site. Even though Jerry declined their offer, the persistent ATV riders spent much of the day trying to access the kill site. In the meantime, Jerry boned out the small bull elk and packed the meat to his 4wd vehicle parked a couple miles away.

The route that the ATV hunters used to access Jerry's downed elk was discovered by other ATV riders. By the time he returned the next year to hunt the same area, Jerry found a well-used two-track ATV trail penetrating the formerly secluded elk cover.

Jerry was in his late 60's when this experience occurred. Jerry still uses traditional archery gear to bowhunt for deer and elk, but hasn't returned to hunt this area after the disappointment of discovering that elk had abandoned the area, too.

Late September brings gold aspens, clear blue skies, and muzzleloader season in Utah. In 2008 I hunted the Pavant. The day that I arrived did not have much of the afternoon left after setting up a tent camp; I decided to hunt closer than I normally do to the road system. I choose an aspen stand on a slight bench above a thick grove of spruce and firs one-half of a mile from the road.

After careful sneaking into the aspen stand I selected a small spruce to sit next to, breaking my outline and still providing good visual coverage. I waited. A buck was bedded less than 30 yards from me, hidden behind another small spruce. Maybe my scent drifted to him, or I made a small noise making him nervous. He jumped and trotted for a distance and turned to look in my direction. I did not know he was there, let alone so close and I was rattled. With no chance for a shot, I watched him bounce out of the aspens and into the grove of spruces. He was a mature 4x4 with moderately heavy main beams, and an outside spread in the 25-27 inch range.

As I worked my way out of the aspens and to a small ridge I noticed several beds and abundant sign indicating that he might be making regular use of the area. I decided that I would give the area a rest for a couple of days and return to look for him again. Maybe next time I wont be asleep. The rest of the evening was spent glassing. Two days latter I returned to the grove of aspens. When I reached the grove ATV tracks were in evidence. The tracks were on the approaching ridge and went into the grove. Someone had driven into the grove and continued on towards the southwest driving down the ridge then returned closely following their original track. Rocks had been rolled and logs turned over. It is steep country with several 100 feet of elevation lost between the road and the aspen grove. I did wait along the edge of the aspen grove in hopes that

I might get a second look at the buck. Nothing. No mature buck and no other deer. I moved slightly and glassed, watching the surrounding area in hopes I might pick him up again. Two days later I tried the area again and it was a zip.

While I cannot say with any certainty that the illegal use of an ATV in an area closed to their use was responsible for the disappearance of the buck, it did cause resource damage and degraded my hunting experience. I will always wonder why the driver of the ATV choose to travel down that ridge and through that grove, when the area is closed to motorized off-road travel.

I have had the unpleasant experience while elk hunting in NM of being frequently bothered by an ATV rider who was hunting from his ATV.  It seemed that everywhere I went, the ATV rider would show up, riding whatever dim remnant of a road he could find.  At one point, I was looking for tracks at a waterhole when the ATV rider drove up on the other side of the waterhole.  Instead of getting off his machine to look for tracks, he asked me if I saw any tracks! In disgust, I walked away without replying.

Many times I have observed evidence of ATV use on wet meadows or fragile soils, which resulted in rutting and accelerated erosion.  Such damage has become so common that is difficult for me to isolate specific examples and locations.

It happens at least once, every season. It just happened to me a week or so ago; hunting public land in N ID...behind a gate. I took a few minutes out of my day to pile up some of the deadfalls in the spot that the guy had been squeezing past the gate. I know that it would probably take him only a few minutes to un-do my work...but I wanted to send a message.

Excuse me, but there is not one square inch of our nation that "You have To Use an ATC or ATV [sic]" to get to. Yes there are responsible ATV users. They may even constitute the majority. But there are way too many yahoos and in total they are doing orders of magnitude more damage than all the foot, horse, and mountain bike traffic. I've had to fence part of my property that was too steep and wooded for traditional 4 x4s to access because of the constant stream of trespassers on ORVs.

They make me walk in further to find Elk. I know, I think of sugar packs and then forget the idea but I sure get pissed when I see them on roads and trails that are prohibited!

I just returned from an antelope hunt in southwestern Montana. We hunted BLM land in Beaverhead County. I witnessed OHV's going across the sage flats as well as 4x4 vehicles. They were not on designated roads but rather were going cross country causing potential soil erosion problems, spreading noxious weed seeds etc. Rather than walking as we and some others were doing to stalk the game they were driving towards herds and then shooting extremely long shots at the antelope. It wrecked the experience for our group and I'm confident for others who were ethically pursuing the game. I could not get close enough to get licenses or tags to report but it is happening in this area.

Just got back from an early Oct. antelope hunt in Wyoming, Diamond Lake Hunter Mgmt Area Unit 43 north of Laramie. The area is private ranchland interspersed with public sections. In the northern half of the area, all vehicles are limited to designated routes. But everywhere you go, guys are driving down closed routes or going cross-country along ridgelines cause they're too lazy or drunk to get out and walk. We encountered a truck driving out on a closed route that we were hiking in on. Of course, they came out empty-handed cause the animals saw them coming a mile away. We were more patient and persistent; about an hour later, harvested a 14-inch buck. Karma is a bitch.

ATV usage has interrupted or spoiled numerous hunts for me in the last few years. I have made a continues effort to seek out closed roads and secluded areas to hunt in order to find mature game and reduced hunting pressure only to be interrupted by ATVs that have built trails around gates or even had the audacity to build a stand-alone trail in the woods. I see the laziness of some hunters coupled with the self-righteous view of land access driving a wedge between hunters, land owners, conservation groups and the public at large. I above all things want the sport of hunting to be understood and
quality hunting opportunities for future generations to be solidified, that is why I oppose abuse and misuse of ATVs on public and private land to include timber company land.

My place near Florence is about 5 miles from the dunes as the crow soars (picture a crow soaring for a minute) (ok…now). The Dune buggers have a 10:00 pm curfew and I wave been awakened at 2 in the morning by those, uh...can't think of something nice. Mind you that I have railroad track right below my house and the train passes and I don't wake up. Granted I'm used to the train, but a dune bugger loud enough to wake me up is wrong! The Forest Service just makes the rules and then have no enforcement, which by the way equals NO RULES. One year it was especially bad and I considered calling the ranger telling him that some of his charges were misbehaving, this at said 2 AM...but… I'm too nice.

I've worked for 13 years to get a designated road system called "Middle Gila Travel Management Plan" in the BLM's Tucson Field Office. The area has looked like a Mad Max set all that time. It's been 2 years since the plan was finalized and there still isn't a map, a gate, a berm, or a single sign on the ground. Law enforcement can't write tickets. BLM just drags their feet and says they need to send out the OHV Ambassadors to educate and self-police. The non-motorized public needs to make some noise. Bureaucracy at its worst.