Colorado BHA held its 8th annual Rendezvous during June 3-5. A group of twenty-five hunters and anglers from around the state set up camp in the San Isabel National Forest west of Salida/Poncha Springs. Camp was located in a high-mountain meadow (known locally as the “goat wadi”) covering about 6 acres at 10,000 feet in the Sawatch Range. We were next to the Colorado Trail and south of the 167,414-acre Collegiate Peaks Wilderness with easy access to a number of hiking and fishing locales.  For a full PDF report on the Rendezvous, click here.

It was a relaxed, mostly unstructured “get acquainted” weekend with some serious conversation, plenty of laughter and good company. During the day Saturday, folks dispersed to go hiking and fishing, returning during late afternoon for an informal chapter meeting to discuss where we’ve been, where we’re going, and to recognize our collective contributions to BHA’s rapidly growing list of conservation (and other) accomplishments.

Prior to kicking off the meeting we celebrated the 90th birthday of chapter patriarch, and BHA Life Member (& WW II/U.S. Navy veteran), Bill Sustrich. Thank you, Bill, for your service to our country and to its wild public lands heritage! We also recognized the conservation contributions of Life Member Steven Choromanski. Steven led our efforts to get “smart rifles” and “life-action game camera’s” banned for use in Colorado by the Colorado Parks & Wildlife (CPW) Commission.

In Steven’s words (to the CPW Commission), “The Colorado Chapter of the Backcountry Hunters & Anglers enthusiastically supports the two proposed regulations regarding the prohibitions on using Smart Rifle and Live Action Game Camera technologies for their use in hunting … We encourage you to approve these regulations, which will preserve the hunting traditions of Colorado, along with continuing the traditions of fair chase, woodsmanship and marksmanship.” The Commission approved the bans during November 2015.

The chapter also promoted BHA Life Member Rick Seymour (a U.S. Air Force veteran) to their new Sponsor/Events Coordinator position. Rick was born in Michigan and raised in northern Illinois, then Indiana, but lives in Silt, Colo. today. He hunts with a rifle, shotgun and trad bow, and says: “I started hunting at about 10 years old with a pump pellet gun searching for the local cottontails in Illinois. I started fly fishing in 1985 after first learning to tie flies from a book I checked out numerous times from the local library.” 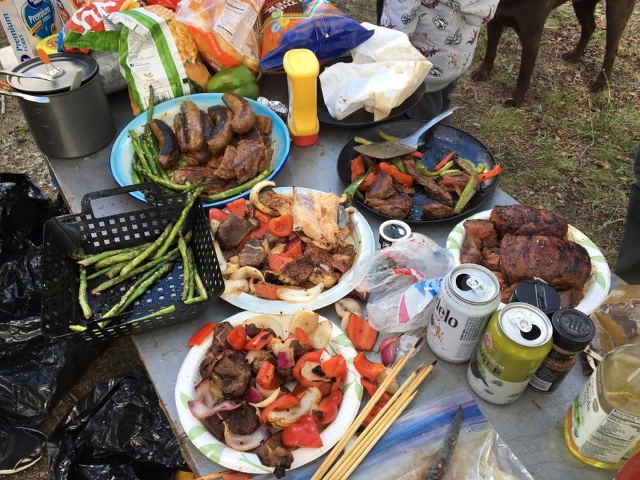 Since the Colorado BHA chapter was founded by David Petersen (a U.S. Marine Corps veteran) in 2005 (the first official BHA chapter), we’ve grown our boots-on-the-ground presence to 400-plus dedicated members along with nearly thirty Life Members. In addition, we have 25 Habitat Watch Volunteers serving as our “eyes and ears” on 10 of 11 Colorado National Forests. We still have Habitat Watch Volunteer openings: contact chapter chairman David Lien ([email protected]) if you’d like additional information/want to volunteer.

“For me, it was always super simple,” David Petersen says. “If you want to hunt, first you have to have animals to hunt. And if you want animals, first they’ve got to have habitat to live in. So, if you’re not trying to protect habitat and improve it and increase it, then you’re working against yourself as a hunter. It doesn’t have to be any spiritual, tree-hugging thing. It’s a very practical way to take care of yourself.”

In the words of Sports Afield contributor Shane Mahoney, “Roosevelt was not only speaking to hunters, of course, but to all members of society. Wildlife, in his view, was to be protected by a fortress of the concerned—an army of men and women who would resist the destruction of wild nature and preserve it.”

And as BHA founder, U.S. Army veteran Mike Beagle, said: “We will continue to be a voice for core values of solitude, challenge, freedom and tradition so badly needed in the world where outdoor pursuits risk becoming more about selling products and technology instead of exercising skill and woodcraft. BHA is getting better and better. The best is yet to come.”

Thanks you Bill, Steven, Rick (& Mike and David) and all the other Colorado BHA members for making the last year such a successful one for our chapter and its efforts to protect wildlands and wildlife for future generations of hunters, anglers and other outdoorsmen and women.

For more photos from the 8th Annual Colorado BHA Rendezvous.

1) Preserve large tracts of wilderness … and game … for all lovers of nature, and … for the exercise of the skill of the hunter, whether he is or is not a man of means.
2) The conservation of wildlife, and … all our natural resources, are essentially democratic in spirit, purpose and method.
3) Public rights come first and private interests second.
4) The genuine sportsman … is by all odds the most important factor in keeping … wild creatures from total extermination.
5) The true hunter … loves all parts of the wilderness.
6) A peculiar charm in the chase … comes from the wild beauty of the country.
7) The rich … who are content to buy what they have not the skill to get by their own exertions—these are … the real enemies of game.
8) When hunting him (wapiti) … He must be followed on foot, and the man who follows him must be sound in limb and wind.
9) Skill and patience, and the capacity to endure fatigue and exposure, must be shown by the successful hunter.
10) I wish to preach, not the doctrine of ignoble ease, but he doctrine of the strenuous life.

About David Lien
share on
See other posts related to Colorado BHA Colorado News Events
Get the latest news and stories, right to your inbox.
Search
Local Chapters