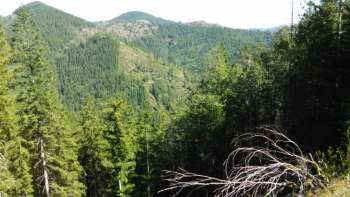 In Oregon (and I believe this is true for many Western states, but not so much anywhere else) we have a number of expansive reserves of public land that allow Joe average hunter (myself) to have reasonably easy access to quality hunting opportunities. My personal favorite lies near the northwestern coast, due to access as well as familiarity (meaning I know where the animals are). Unfortunately, it is also centrally located between an agricultural coastal community with a strong tradition of hunting, and a major metropolitan area (Portland and surrounding communities). With an estimated population of 2.5 million people in the Portland Metro alone, if even .1% of them were hunters who wanted to share the woods on the same day as myself, there would be as many as 2500 people out there with me. This number does not include off roaders, nature lovers, and professional timber workers who also utilize the same resources. In other words, there is a tremendous demand for access to this resource, and its value to the area should be glaringly obvious.

Last season I managed to work things out with my lovely spouse so that I could have a few days in a row to do an extended hunt. I went to the "secret spot" that in reality many other people know about, but I had a day off in the middle of the week and it was empty enough to be almost like a wilderness experience. I parked at the end of a spur that continues on deep into a drainage past a tank trap which discourages most of the ATV's and other off roaders. I have found elk in there frequently enough to bring me back every season. Once away from the road, it has that dark, lush and steaming feeling of the primeval forest most of the time.  However, after 7-8 weeks of 70-plus degree temperatures, and no precipitation, it was like walking through a bowl of corn flakes. It was getting late but it had been a long three days at work, and I was restless. (I shouldn't complain, I shorten my work week during hunting season which is a luxury many don't get to enjoy). So I grabbed my gear for an evening walk down into the drainage to see what was happening. After a few hours I determined that nothing was moving, so I went back to camp.

Elk in this area, even during early hunting seasons, seem to mostly stay down low in these steep coastal mountain drainages. The downside of this is they are hard to get to, hard to sneak up on, and the pack out, if you're lucky, is daunting. The upside is that they are there, and you're likely to see one of the more majestic looking critters in the North American wilds sooner or later if you spend enough time.  This is about as good as it gets on public land, and I am grateful it is still here to see.

By evening (on a Friday) the local hunters started racing in after work. Two separate trucks came down the 1/2 mile long dead-end spur I was camped on, looking for a place of their own. After sincere apologies and equally sincere wishes of "good luck!" they turned around and went back up the spur, to find someplace before the rapidly closing nightfall. While I can't begrudge others who, like myself, are looking for room away from the daily grind, it does underscore how necessary it is to protect such rare and precious places that are left. There are only going to be more people who want to have the experience, and with more people comes more pressure. My "secret place" is obviously not a secret.

I was up early the next morning, my last day away from home. It was Saturday, so the hunting community was out in full force. I'd decided to travel to a new area, but on the way I found myself following a couple fellows who were driving pretty slow and glassing the slopes from the road. They obviously didn't see me and I wasn't of a mind to honk. (There's no honking in hunting!). Eventually they noticed me and let me by, and I noticed that I was starting to get a bad attitude. Figuring that the best I could hope for today would be to scout somewhere I'd never been, I picked a heavily overgrown twin track and crashed my truck through the high grass and saplings down a bit in to a drainage I hadn't explored before. Got out, grabbed my stuff, and walked the rest of the way. It turns out that was the ticket.  While the SUV's, ATV's, and 4x4 pick-ups buzzed around above me like gnats over a fruit bowl, I started a hike down into isolation that eventually led to a large herd of cows.

They were in the bottom browsing calmly, as if they hadn't a care in the world, seemingly unaware or unconcerned about the potential dangers up above. Maybe they were confident in their ability to outrun and out-negotiate anything that might challenge them in this terrain. Certainly it was true in my regard. Between us was the detritus of old logging operations, consisting of a knee deep layer of small branches that my timber-cruiser uncle would call "dog hair," (as in the clusters of fuzz that you find in the corners of a room while vacuuming). Interlaced through this were small briars, equivalent to 4-5 pound test monofilament. One alone is not much of a barrier, but drag your foot through 3 or 4 and you'll likely end up on your face. Sprinkle on top a layer of dry leaves, and the futility of attempting to sneak up on anything becomes obvious, but sneaking is required if your equipment is a self-bow with a range of 30 yards or less. I tried anyway, with predictable results, though I did notice that my attitude problem had suddenly disappeared. Off they went with the "crash, thump, tha-dump dump dump!" sound of heavy animals quickly leaving the scene.

While I was not successful this time around, and the biggest struggle of the day was with my own frustration at feeling crowded, it would break my heart to lose the opportunity to visit this place, limited and pressured as it is.

Currently there is a concerted effort by some members of Congress to press for public lands to be sold to individual states or private parties. The reasoning is that they are mismanaged by the Feds, that they are "excess," and that their sale can be used to pay off the national debt. It isn't difficult to imagine who would really benefit the most from such a choice, (sponsors include folks with close ties to oil and mining interests) but it is clear to me that it would also create more congestion and fewer opportunities for the average outdoor enthusiast. The problems that are mentioned in the proposals have a basis in reality, but the principle of land being held for the benefit of all is not the problem, and selling it out from under the public is clearly not the solution. Please let your representative know that you oppose such harmful and drastic solutions to temporary problems

About Matthew Grady
share on
See other posts related to the campfire Backcountry Stories
Get the latest news and stories, right to your inbox.
Search
Local Chapters