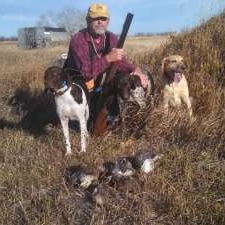 Randy Gray is a certified Wildlife Biologist. He retired from the USDA Natural Resources Conservation Service in 2007 where his last position was the National Wildlife Biologist in Washington, DC. He then went to work with the Intermountain West Joint Venture focusing on acquiring funding and support for partner biologists to help deliver Farm Bill conservation programs that benefit wildlife. He helped with the Sage Grouse Initiative and raised funding from over 30 conservation organizations and State Game agencies to hire 23 biologists and range conservationists in nine western States to help farmers and ranchers implement habitat projects  benefiting sage grouse and other species. At the moment he is retired so he can focus on hunting. His passion is upland bird hunting with his German shorthairs interspersed with big game hunts.  Randy has lived on and off in New Mexico as his career allowed since 1999. He lives primarily in Las cruces when not hunting around the West.