As hunters and anglers, we believe that the United States holds some of the planet’s finest lands and waters to enjoy our pursuits. Our ability to hunt and fish on land owned by the collective citizenry (you and me) of our nation is the envy of people around the world.

While there are incredible lands and outdoor opportunities to be found across the USA, there is one place that has a special hold on our hearts and minds: Alaska. The Great Land occupies a space of wonder, timelessness and enormity. In a state so rich and diverse, there is one region that can qualify as the last frontier of The Last Frontier: the Arctic north.

Alaska’s arctic regions, including and lying north of the fabled Brooks Range, is a complex mashup of rugged peaks, valleys, foothills, tundra, open plains, wetlands, lakes, and rivers flowing northward to the coast of the Arctic Ocean. In this vastness often referred to as Alaska’s North Slope, there exist two enormous parcels of public lands: the Arctic National Wildlife Refuge (Arctic Refuge) and the National Petroleum Reserve – Alaska (NPR-A). The Arctic Refuge encompasses 19.3 million acres (making it the largest in the National Wildlife Refuge system) and is located in the extreme northeast corner of Alaska, bordered by Canada to the east and the Beaufort Sea to the north. The NPR-A covers roughly 23.6 million acres (making it the single largest undisturbed tract of public land in the USA) in Alaska’s northwest, bordering the Chukchi Sea to the west and the Beaufort Sea to the north. The scale of these landscapes approaches the point of unfathomable. 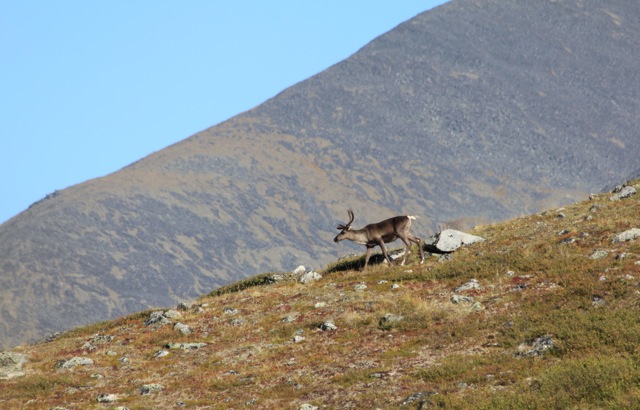 Across Alaska’s far north are found numerous species of mammals, birds, and fish that are pursued by anglers and hunters. Opportunities to hunt nomadic caribou from the Porcupine herd which utilizes the coastal plain of the Arctic Refuge and from the Western Arctic and Teshekpuk herds in the NPR-A give a person a chance to witness thousands of animals pulsing across the tundra. One can compare it to stepping back in time to see the vast herds of buffalo that used to thunder across the Great Plains or to be on the other side of the world and view the immense congregations of wildebeest in East Africa. The ability to pursue other species across Alaska’s north, such as grizzly bear, wolf, moose, and Dall sheep in some of the most unforgiving terrain is sure to test any hunter. For the wingshooter, rock ptarmigan provide a worthy quarry.

No matter where you call home, if you hunt ducks or geese you are possibly decoying birds that spent their summer nesting and raising their young on wetlands in Alaska’s arctic regions. The Teshekpuk Lake Special Area in the NPR-A is critical habitat for tens of thousands of greater white-fronted geese, Pacific black brant, cackling geese, and snow geese. It’s been labeled the most important goose molting area in the Arctic – not just Alaska’s arctic, but in the whole world. Other species of waterfowl in arctic Alaska that migrate to all of North America’s flyways include all four species of eiders, tundra swans, wigeon, pintail, longtail duck, canvasback, teal, merganser, and more.

Wetting a line in the frigid rivers and lakes of far north Alaska yields not only cold fingers, but species ranging from Dolly Varden, arctic char, grayling, whitefish, lake trout, northern pike, and even salmon.

We firmly believe that the remote reaches of northern Alaska are important habitat for many species of game and non-game mammals, birds, and fish. We urge our decision-makers to heed the best scientific evidence available and to err on the side of caution when it comes to proposed development in Alaska’s arctic regions. Critically important areas such as Teshekpuk Lake and the coastal plain of the Arctic Refuge must to be given the highest levels of protection for their value to wildlife and fish, both resident and migratory. Alaska’s arctic represents an ideal in the hearts, minds, and dreams of hunters and anglers. Whether we’ve been there and can’t wait to return, or if we simply dream of experiencing these amazing lands and waters someday, these lands must remain for us and future generations.

For more information and stories on this landscape, see the resources linked below:

Shelly Filgo
157 signatures
the campfire alaska issues
share on
Get the latest news and stories, right to your inbox.
Search
Local Chapters