Preserve Hunting and Fishing Grounds by Staying on Trail

The following blog post was submitted by Oriana Turley , on behalf of the Trailer Superstore. Oriana is a freelance writer, poet and outdoor enthusiast and spends most of her days on her homestead in Stevensville, Montana. There she plants food forests, raises Organic hogs and works as a child advocate throughout the greater Bitterroot Valley. 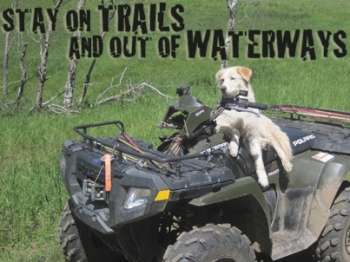 "The best thing people can do is stay on a trail," says Lori McCullough, the CEO/Executive Director of Tread Lightly! Campaign Inc. "The worst thing they can do is veer off a trail."

By staying in designated areas, on designated trails and avoiding water OHV users can greatly decrease their impact on the ecosystem, McCullough said. The Tread Lightly! campaign focuses on the concept of "Respected Access is Open Access." The goal is to get people who use motorized transportation in nature to feel a sense of stewardship to the land.

For McCullough it is important for hunters and anglers to 'walk the walk', or in this case ride the ride. If people have all the information, know the legal consequences and have an understanding as to what the environmental impacts could be if they break the rules, there is no excuse for breaking new trail or disrupting waterways.

But there still are plenty of OHV users out there that just don't care, says Jim Crosby.

Crosby is a hunter and angler who lives in a part of Montana where he sees big game and world class fishing out his front door. He owns OHVs but prefers to not use them for hunting or fishing access.

"A fair chase walking hunt is how I roll," he says.

He says that he sees the impacts of OHVs out in the woods of Montana regularly. He says that though not all OHV users are disrespectful, there is a lot of abuse that happens when people don't think they will get caught. He says it is important that the OHV community at large doesn't condone ducking gates, running fast down trails and getting morbidly obese people into places they would normally die.

But he sees abuse in areas around his secluded home all the time.

"The more remote the spot, the more I see tracks and tearing up of non-motorized areas," he says.

The value to the OHV crowd is getting everywhere and doing it without walking or spending too much money, he says, and a lot of time they want to do it regardless of the rules. Crosby has had eight or nine on-foot day hunts blown because of off highway vehicles zipping around in the area. He says this doesn't sound like much, but it is really frustrating when they don't seem to care.

"The fat, abusive, loud mouth on his quad with a gun that he does not shoot often or well is all too familiar," he says. "It is the cultural bastard child the ORV community doesn't want to confront."

This is why the combined efforts by sportsmen’s organizations like BHA, OHV organizations like Tread Lightly! and government agencies to address the “4 E’s” (enforcement, education, engineering and evaluation) are so important to preserving wild fish and wildlife habitat. It’s up to you to get involved.