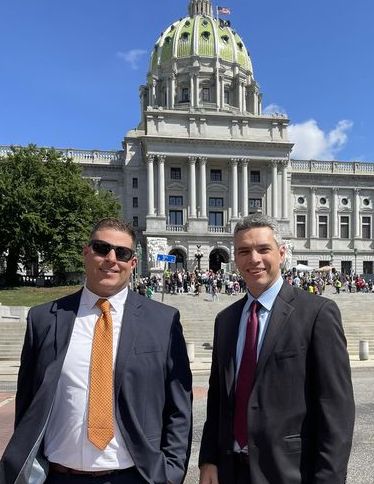 The Pennsylvania Chapter of Backcountry Hunters and Anglers has had another busy year advocating for our members in Harrisburg.

Our board members have regularly visited the capitol to meet with legislators and we’ve used chapter funds to hire Policy Advisor John Kline, giving BHA a constant presence working on our behalf in Harrisburg. We are the only BHA Chapter with a full-time lobbyist. These efforts have allowed us to build relationships with partners, legislators and leaders in our state agencies. The result of three years of this work is paying off with victories such as passage of SB 431, the “Pink Envelope” bill. BHA and its members are a trusted source of feedback among legislators and we are often called upon to be a sounding board for legislation and policy early in the process.

Our work this year includes:

The Recreation Engagement Coalition is an effort by PA DCNR to grow and empower the outdoor economy in Pennsylvania. BHA PA was invited by the DCNR’s Director of Outdoor Recreation, Nathen Reigner, to represent the hunting and fishing community alongside other leaders in the outdoor realm. BHA volunteers and staff have worked to help forge the duties and activities of this new office with public lands and outdoorsmen and women in mind.

In July, the chapter joined our friends at the National Deer Association in calling for the regulatory oversight the Commonwealth’s 723 captive deer shooting facilities to be transferred to the Pennsylvania Game Commission.

The presence of Chronic Wasting Disease (CWD) in the Pennsylvania’s deer herd is a threat to the future of hunting in Pennsylvania and the $1.6 billion in economic output generated by hunting that supports many jobs and businesses.

As CWD has spread across the state, and is now perilously close to the elk herd, it is obvious the present system, managed by the PA Department of Agriculture, is ineffective at stopping the spread of the disease.

The PGC has the capabilities to enforce regulations in captive deer shooting facilities while the Department of Ag does not. Furthermore, the PGC has within its ranks wildlife biologists trained to understand and manage wildlife diseases such as CWD.

PA BHA was tasked with providing input for the 2024-2026 Strategic Plan. The response provided will help agency staff better understand what hunters hope to see from the PGC.

The Work Group is a coalition of hunting and fishing non-profits operating in Pennsylvania. The group meets monthly to discuss legislative, agency and policy developments affecting hunting, angling and public lands and waters.

The Chapter participated in a Field Event for legislators where we were able to give hands-on demonstrations of outdoor skills and provide samples of wild game taken by Secretary Nick Long. Outreach efforts such as this help educate our legislators about hunting and angling and its connection to conservation and the environment.

A victory! At long last, the pink envelope is history. The PA Chapter strongly supported this bill. With its passage, the antlerless license system will move to an online or in person format, identical to the method of purchase for every other license.

Sunday Hunting remains our top priority. The bill was voted out of the Senate Game and Fisheries Committee but went no further. We have been assured that this bill will be resubmitted in the next session. We look forward to taking up the fight as this is the single biggest access issue in Pennsylvania

Would allow full time out of state students to purchase a hunting license at the resident rate. A similar program already exists for fishing licenses. We were instrumental in the introduction of this bill and worked to gain co-sponsors from both sides of the aisle. Unfortunately, the bill was introduced later in the session and did not have time to progress through the legislature. It will be reintroduced in the next session.

We look forward to the opportunity to forward the interests of sportsmen and women in the next legislative session.