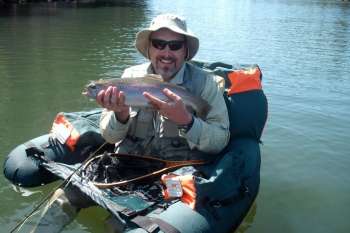 Senator Ron Wyden was unsuccessful in his attempt to attach his important O&C timber management bill onto the Defense Appropriations bill passed at the end of the lame duck session in December.  His bill would modernize the way timber is logged in western Oregon’s 2.8 million acres of checkerboard BLM lands providing more economic certainty for 18 counties.  It also set aside half of these lands for concentrated conservation – protecting important water resources and the icons of Oregon – trout, steelhead, and salmon fisheries.  The Oregon BHA chapter has worked closely with the Senator in mapping out backcountry conservation areas which Wyden wrote into the legislation.

The House has also passed its version of an O&C bill as well, but that version is not supported by Wyden, the White House, or BHA as the House bill would transfer well over a million acres of federal public lands (BLM) into a state managed trust for timber harvest.  Wyden says such moves would negate federal environmental laws and he won’t support it.  You can check his comments here:

With the change in the ruling majority in both the House and Senate, the management of timber harvest in Oregon remains uncertain.  In the meantime, rural counties are faced with reduced budgets and unemployment due to this uncertainty.  As hunters and anglers we are seeing negative impacts from a lack of legislation to manage the forests as well.  With logging halted over the last thirty years, tree canopies have grown so thick that forage for big game is hard to find.  The result is deer and elk are moving from public lands we hunt to private lands where we can’t.  Key riparian areas need better management as well.

So, we find ourselves in the status quo and nobody wins.  What happens next?  With Republican House and Senate control, the House bill will be pushed hard by Congressman Greg Walden.  He also has the support of Oregon Democrats DeFazio and Schrader, as well.  But will there be enough votes in the Senate to pass it and will the White House follow through on a promise to veto such legislation?  The log jam will continue unless both parties collaborate and work for common solutions for the greater benefit of all.  Here’s hoping.  Stay tuned.  Backcountry Hunters & Anglers will remain engaged in the discussion.

For further reading, check this link: